The only hope for the Tibetans? 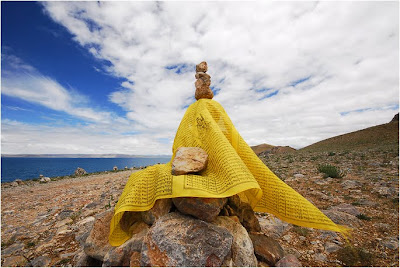 One usually considers The People's Daily or Xinhua as tools used by the Communist  regime in Beijing for their propaganda.
Today, I found this interesting article in China Tibet Online, one of their affiliates.
This is not propaganda, it is pure truth. Today, the only hope for the Tibetans is to pray around their sacred stones and their hearts.
In his Last Testament, the Thirteenth Dalai Lama explained how he came back to the Land of Snows after a two-year exile in India (1910-12). He wrote: "As a result of our past meritorious karma  and the numerous prayers and services that were conducted in Tibet, internal strife took place in China. It was no problem, therefore, to completely drive out the Chinese force from Tibet. From then on the year of the Water-Monkey (1912), there was renewed happiness and peace reigned in Tibet."
Prayers (and manis) will probably save Tibet once again. But when?


Mani stone, hopes of Tibetans
2010-08-29 | by: Mirenda Wu | From: China Tibet Online
The mani stone mounds near a holy lake in southwestern China's Tibet Autonomous Region.
Mani stones, which are made of stone plates, rocks or pebbles, inscribed with characters, images such as Six-Syllable Prayer and Buddha, are regarded as the dreams, feelings and hopes of Tibetan people.
Posted by Claude Arpi at 7:35 AM