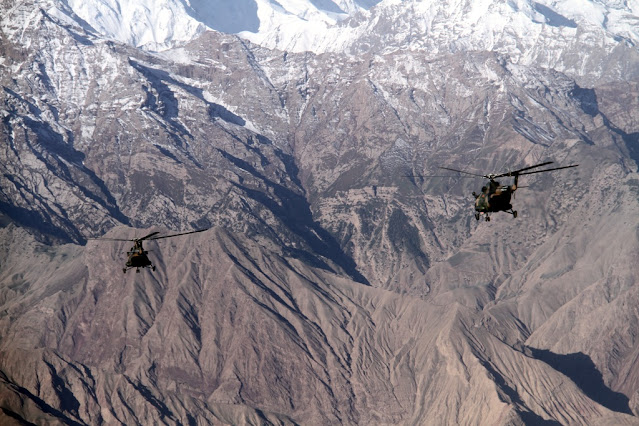 Chuva and Chuje: Obscure Chinese Claims in the Central Sector
It was recently reported that the populations of the Lahaul and Spiti, and Kinnaur districts of the Himachal Pradesh were becoming increasingly nervous; they expressed serious concerns as China has been building roads leading to the Indian villages near the border.
The Hindustan Times wrote: “Road construction along the Indo-China border, on no man’s land, came to fore after villagers of Kunnu-Charang in Kinnaur raised an alarm and informed the local administration and border patrol party.”
The article further noted: “China has accelerated work of road construction along the Indian border in Tango and Yamrang regions, which are close to Chitkul and Charang villages on the Indian side. Both Yamrang and Tango in China are controlled [by the] Tibetan Autonomous Region.”
Though there is no known village by these names in Tsamda (Zanda) county of Ngari Prefecture, it is possible that these are new villages or the names have been changed.
A villager told the media that China was building a road to the Yamrang village. “There is no mobile network in the region and road connectivity is poor on the Indian side. There is fear among villagers that the Chinese troops could invade the Indian territory,” said the article.

The Indian Army and the Indo-Tibetan Border Police manning the border, are now on high alert.
While most of the Indian media reported that the area was not ‘disputed’ by China, it is not the case. Areas called by China, Chuva and Chuje have been on their long ‘shopping’ list to extend their territory since the end of the 1950s.

The Case of Shipki la
After looking at the ‘dispute’ in Chuva-Chuje area, we continue eastward and look at the case of Shipki la (pass), also in Himachal Pradesh.
This is another tenuous claim from China, with no historical, cartographical or geographical backup. Presently it is a dormant claim, but with Beijing in the mood to claim Tajikistan’s Pamir Region and Vladivostok (and Ladakh), it is worth looking into the facts.
The first Chinese incursions inside India’s northern border, took place in Barahoti in June 1954, hardly two months after the signature of the Agreement on Tibet.

In a way, Barahoti could be explained by the fact that Indian negotiators omitted to insist on Tunjun-la as a pass notified in the 1954 Tibet Agreement. This gave an opportunity to the Chinese to claim an area south of the border pass.
But what happened two years later, cannot be justified under the same principle. In Shipki-la, it was plain violation of the Indian territory, without any justifications.

The Nilang/Jadhang 'dispute' with Tibet
Nilang/Jadhang is the third places ‘disputed’ by China in the Central Sector (going westward).
This ‘dispute’ is different from the two precedents, Chuva-Chuje (Kaurik sector) and Shipki-la, in the sense that the Nilang-Jadhang area (South of Tsangchok-la) was disputed by the Tibetan government before Independence.
But it was a ‘gentle’ dispute between neighbours sharing the same values.
For the Tibetans, their claim was based on the fact that the Thirteenth Dalai Lama would have said that the border was located at a bridge on the Gumgum nala on the way to Gangotri.
For the British, the principle of the watershed was the prime deciding factor and therefore Tsangchok-la was the border (India has since Independence followed this principle).
Soon after the Chinese occupied Tibet in 1950/51, the situation which had been pending for decades, suddenly became pressing and Delhi had no other options but to send police patrols and take control of the place in 1952.
The issue was discussed at length during the meetings of the Officials of India and China in 1960, but China did not accept the Indian stand.
I will come back to the area, as China created further confusion, soon after by mixing up two places, having a bit similar names (Pulang and Pulam).
One of main historic upshots of the relation between Tibet and the Himalayan region has been the Sino‐Indian border dispute along the 4,000 km mountainous range.
In some cases, the present ‘dispute’ with China has its origin in disagreement between the Lhasa government and the administration of Himalayan princely states (and by extension British India). This is true for NEFA.
Our case study relates to Nilang/Jadhang area in today’s Uttarakhand.
It is particularly interesting due to the large amount of correspondence between Tibet (the Kashag in Lhasa and the Dzongpen (or Dzongpon) in Tsaparang) and the princely states of Tehri‐Garhwal, Bashahr as well as the provincial governments of the United Provinces and the Punjab and of course, the Foreign and Political Department of British India in Delhi.
The ‘negotiations’ lasted some 12 years, at the end of which no mutually acceptable solution could be found (it fact, it lasted till India's Independence).
The entire story is extracted from a couple of files today in the British Archives. A few years ago, I had the good fortune to come across them and I thought it would be interesting to share this unknown aspect of the Himalayan relations.

Pulamsamda vs Pulang Sumdo, a Fresh Absurd Dispute
It is necessary to mention the case of Pulamsumdo, which is also part of the Nilang-Jadhang region.
Here too the Chinese claims are laughable.
The ‘dispute’ came from two places whose names sound slightly similar.
Let us remember the basics to determine a border, as explained in the Report of the Officials of India and China in 1960/61; the Indian Report says: “In the Middle Sector both sides had referred to the watershed boundary and were clear as to where the watershed lay. In fact, the two alignments coincided for the most part along the main watershed. The Chinese alignment departed from it only at Gyuand Kauirik, Shipki, Nilang-Jadhang, Barahoti, Lapthal and Sangchamalla. All these departures from the watershed were also the points of divergence from the Indian alignment, and were, curiously enough, to the south and west, so as to include Indian territory in Tibet, and in no case the other way round. These isolated and small departures always in one direction were difficult to comprehend and emphasized that the correct traditional boundary lay along the watershed itself.”
It was therefore clear that what was south of the watershed was India and north Tibet. This is a universally accepted principle to demarcate borders.
The Report of 1960 further noted: “In this sector the Chinese alignment are conformed for the most part to the traditional Indian alignment. Only in four areas did it diverge from the watershed to include certain pockets of Indian territory in China-the Spiti are (Chuva and Chuje), Shipki pass, the Nilang-Jadhang area (Sang and Tsungsha) and Barahoti (Wu-je) Sangchamalla and Lapthal. In this sector, therefore, it would be sufficient to prove the traditional and customary basis of the Indian alignment in these four areas.”
The Indian delegates argued that the traditional and customary boundary in this sector lay along the watershed range, marked by the passes of Tsangchok La, Mana, Niti, Tunjun La, Balcha Dhura, Kungri Bingri, Darma and Lipulekh; therefor “Nilang, Jadhang and Pulamsumda were in Uttarkashi district (formerly Tehri-Garhwal State), Barahoti in Garhwal district and Sangchamalla and Lapthal in Almora district, in Uttar Pradesh State.”
Apart from Nilang-Jadhang, this principle had never been disputed by the Tibetans.

The History of Barahoti Plain
The next ‘disputed’ place has often been in the news: it is Barahoti.
Here too the Chinese claim to the area are fictitious (not to say frivolous) as the area is clearly located south of the watershed.
On November 20, 1950, during a question and answer session in the Parliament, Prime Minister Nehru was asked: “Will the Prime Minister be pleased to state whether India has got any well-defined boundary with Tibet?”
His answer was: “The border from Ladakh to Nepal has probably not been the subject of any formal agreement between India, Tibet and China but it is well established by custom and long usage. The Historical Division are investigating if there are any formal agreements. There have been a few boundary disputes in this area but they have been peacefully settled.”
It is a historical fact that the Indo-Tibet frontier had been peaceful. It is probably why the Indian diplomats who four years later negotiated the Panchsheel Agreement foolishly ‘forgot’ to mention the border during the talks (and in the final text). India would pay dearly for this lapse.
Over the years, China have kept changing the posts, claiming new areas, often not knowing the coordinates of the places.
In this context, it is interesting to study the historical background of the ‘disputed’ area, called Barahoti by India and Wu-Je by China.

In August 1980, SN Gopalkrishnan, Senior Research Officer of the Historical Division of the Ministry of External Affairs explained once again the factors on which are based a border's delineation.
Referring to the meetings of the Officials of India and China in 1960, he noted: “The Indian side brought forward clear and conclusive evidence to show that the alignment as shown by them in the Middle Sector had, throughout its length a traditional and customary basis reaching back through many centuries, and that, in addition, this boundary had been recognized by Chinese Governments and been confirmed through diplomatic exchanges, treaties and agreements. The Indian side also brought forward a large of representative evidence relating to different aspects of administration, to show that Indian Governments had exercised full, continuous and uninterrupted control over all the areas right up to the traditional alignment.”

Glimpses of the Land Dispute with Nepal

On May 8, 2020, an argument erupted between India and Nepal; the immediate reason which triggered the debate was an 80 km road between Darchula to Lipulekh, the border pass near the trijunction with Tibet and Nepal, inaugurated by Defence Minister Rajnath Singh.
The road is to be used by the Indian pilgrims visiting Kailash-Mansarovar, located some 90km from the pass, as well as the local traders; Lipulekh being one of the three landports between India and China. Strategically, this road is also crucial for India.
PTI then explained: “The Lipulekh pass is a far western point near Kalapani, a disputed border area between Nepal and India. Both India and Nepal claim Kalapani as an integral part of their territory.”