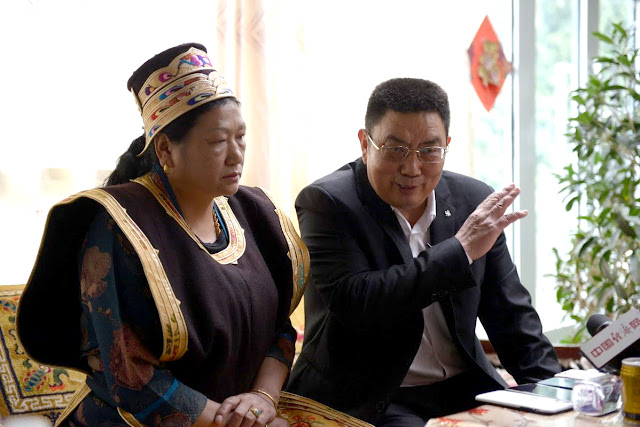 Inter-marriage between Hans and Tibetans is not new, though during the 70 years following Tibet’s invasion by the People’s Liberation Army (PLA), it has remained rare exceptions; the Tibetans being always reluctant to lose their Tibetanness.
It seems that it is changing, due to Xi Jinping’s new policy about the transfer of 'ethnic groups' on the border.
In March 1955, in a Report to the Ministry of External Affairs, Apa Pant, the Political Officer (PO) in Sikkim noted that the Chinese were showing great energy and organizational skill to reform certain aspects of the Tibetan administration: “Starting of schools and welfare centres, organizing of social events such as cinemas, is attracting at least some of the inhabitants of Tibet.”
The PO believed that the people in the Chumbi Valley near Sikkim, were taken in by the Chinese efforts to win over the Tibetans; he also mentioned inter-marriages: “One of the aspects of the policy of establishing closer bond between Tibet and China is the great encouragement, even at times through a great deal of propaganda, that is being given to Sino-Tibetan marriages,” he wrote.
However, many Tibetans feared that the Chinese would marry the most eligible Tibetan girls “and produce a new generation of Sino-Tibetans who would have deeper emotional feelings towards China,” wrote Pant Pant.
This intermarriage phase would not last.
It would practically stop after the Dalai Lama took refuge in India in 1959.
In 1955, Pant however prudently added that “this aspect of Chinese activities in Tibet requires careful watching.”

Today, a State Policy
The situation has now changed and it seems that he has become part of the policies adopted during the 7th Tibet Work Forum in August 2020 in Beijing, to show 'unity of the Chinese Nation'.
As an article in The China Daily puts it: “Han-Tibetan couples reflect region's love of unity”.
The Chinese propaganda publication explains: “During the 70 years of history after the peaceful liberation of Tibet in 1951, ethnic equality and unity have always been cornerstones for the region's rapid economic development. As reform and opening-up deepens, the physical and emotional ties between Tibetans and people in the rest of China become closer, with frequent business interactions and a growing number of mixed communities.”

Xi Jinping’s visit to Tibet
As mentioned in a previous post, on August 2, The Tibet Daily published several quotes attributed to Xi Jinping during his interaction with the local officials in Tibet; Xi’s views are encapsulated in slogans, among them: “the border area is the first line of defense and the barrier for the national security. We must strengthen the construction of border infrastructure, encourage people of all ethnic groups to take root in the border, protect the country or build their home-town."
The remark about ‘all ethnic groups taking root on the border’ should have rung the alarm bells in Delhi and Dharamsala. Did it? 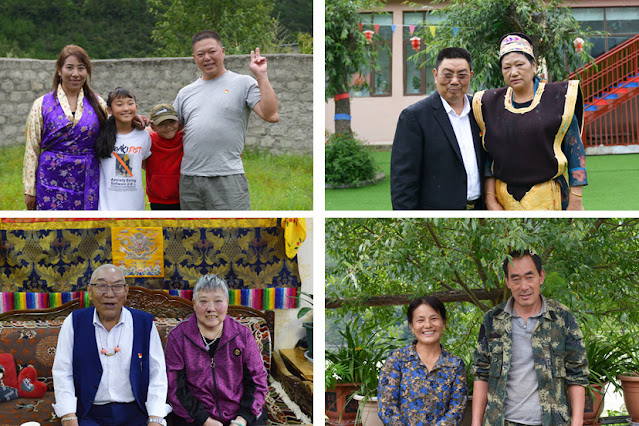 Tibet Multi-Ethnic?
To come back to The China Daily article mentioned earlier, it states: “Official statistics showed that more than 40 ethnic minorities live in the Tibet Autonomous Region, and Tibetan inhabitants account for over 90 percent of the total 3.64 million population. Nowadays, families consisting of members of different ethnic backgrounds are quite common in Tibet.”
Whether it is true or not, is difficult to say, but cities like Lhasa are today overwhelminingly Chinese.
The Party’s newspaper takes the example of four couples, their Han-Tibetan intermarriage being “a great demonstration of ethnic unity in this new era of development.”
It is clear that it has now become a State policy to be implemented before the next Tibet Work Forum around 2025.

It has to be noted that these decisions remain secret (at least remain within the Party) till they are fully implemented. It has been the case for the Xiaogang villages, particularly those on the Indian border.

Four Examples
The first example given by the article is Wei Rongjian, who is born in Nanchong, Sichuan province, where he was managing a private martial arts school.
He came to Tibet in 1989: “After falling in love with the Tibetan woman Chaguo [Chinese name?], he settled down in Trinkhor (Zhongguo in Chinese) village of Nyingchi City. …Wei devoted himself to revitalizing countryside education and set up a non-profit school in 1996, offering local children a window to explore the outside world.”
In 2003, Wei invested some 2.6 million yuan ($400,000) to establish the first kindergarten in Trinkhor with both Tibetan and Chinese language courses for the students.” He told the newspaper: “Although I am over 60 years old, my wife and I still work over 10 hours a day with the school's affairs. My mission lies in providing modern and urban education resources for students in rural areas."
The second case is Jamyang Choephel, married to Du Yingfang; the couple lives in Bome in Nyingchi City.
Jamyang Choephel is a car mechanic born in Bome; he has been transporting goods and materials from Sichuan to Tibet since the mid-1960s. He met Du Yingfang, a Chengdu woman, via a mutual friend, and they got married in 1976. This is a rare case of Tibetan man marrying a Han girl: “At first, all of my friends were curious why I married a Han woman, because intermarriage between different ethnic groups was quite rare at that time," said Jamyang.
According to The China Daily: “Despite the misunderstandings of others, the couple live a simple but happy life for over 45 years and have two kids, who are already grown, and have with their own jobs and families. …Every year we go back to Chengdu to celebrate the Spring Festival, by plane or by car. It's more convenient than before!" observed Du.
Once again it is rather rare to have Tibetan man marrying Chinese girls.
The next couple is Nyima Lhamo and Zhou Jingming, who also live in Bome county.
Zhou Jingming, who is from Leshan, Sichuan province migrated several years ago to Göndrong (Yigong in Chinese) to earn a living, “a local woman named Nyima Lhamo who was running a small shop in the village caught his eye,” explained Zhou.
Lhamo had already been married, but had divorced: “After spending time together over three years, the two tied the knot in 2012, and have been managing a restaurant together since then,” she said.
The couple has now opened a new hotel with ten guest-rooms, offering Tibetan-style homestay experiences to tourists who come to Bome: “We earn about 300,000 to 400,000 yuan per year, [it is] a very satisfying income," Zhou said.
Zhou has entered politics; he was recentre elected deputy to the National People's Congress in the township; he is responsible for the rural revitalization; he swears that he “will devote himself to increasing the income of rural residents and diversifying the town's business models.”
Practically, he will bring more Han settlers who will marry Tibetan girls.
The last couples mentioned is Mumu and Yan Shiquan, who live in Lulang town, the ‘Switzerland of Tibet’ in Nyingchi.
The couple manage a 12 greenhouses of vegetables, and a pig farm with around 300 livestock. Married for 27 years, they have “dabbled in many business ventures, and started to earn a good living three years ago through farming as well as raising livestock. With little experience at the start, Mumu and Yan had to learn from scratch all the necessary agricultural techniques.”
These examples are obviously promoted in the Chinese media to emulate other Tibetan girls to marry Chinese. 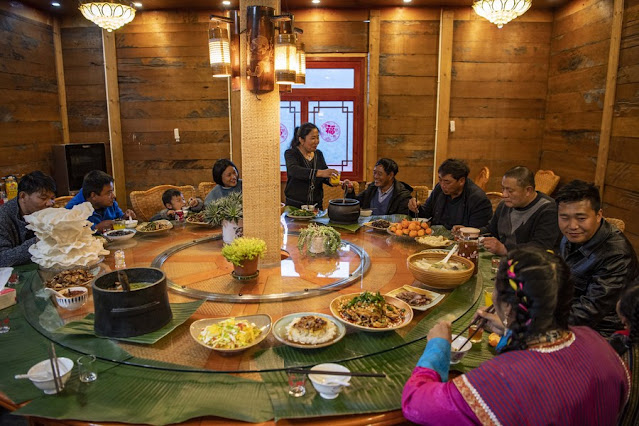 560 multiethnic families in Metok
A few months ago, Xinhua had already touched upon the issue: “According to statistics, there are more than 560 multiethnic families in Metok [near the Indian border]. People of different ethnic groups help each other in farming and animal husbandry, and children of different ethnic groups study in the same classroom. People here celebrate the New Year's Day, the Lunar New Year, the Tibetan New Year, ‘Dashiang’ folk culture festival of Monpa ethnic group and other ethnic festivals.”
The news agency highlighted the case of Zhang Chunhuan and his family celebrating together he eve of the Chinese Lunar New Year: “Eight years ago, Zhang Chunhuan, a young man from Shanxi Province, came to Metok. At that time, the traffic in the county located at the southern foot of the Himalayas was inconvenient. Zhang had to walk three or four hours from some townships to the county seat to buy daily necessities. He never planned to make his home here one day,” recalls Zhang.
Zhang eventually married Tashi Yudron, a Monpa girl; they have now a daughter. Xinhua says: “Nowadays, Metok has schools, shops and restaurants. A beautiful park has been built in the center of the county seat. It has become a tourist attraction in Tibet and an agricultural products base featuring tea, Tibetan medicine and characteristic agriculture. In 2019, Metok shook off
poverty.
Zhang's parents joined the couple to celebrate the Spring Festival for two consecutive years: “Now, Metok is my home,” said Zhang.

There is nothing wrong with inter-marriage as such, but when it becomes a State Policy, with the purpose of 'uniting' Chinese race, there is something wrong.
The above are obviously model cases to be emulated by many more Tibetans; Beijing has proably calculated that if thousands of Tibetan girls get married to Chinese migrants (for example those coming to work on for the mega infrastructure development projects on the border), a page of the history of Tibet will be turned forever, with no chance for Land of Snows to become Tibet again in the future.
Dharamsala and Delhi should take this issue seriously, otherwise it will weaken the Tibetan 'cultural' cause and the border populations in Northern India have soon to face new neighbours, with all the consequences it implies.