Though Sarkozy said there was no need to ‘dramatise’ the meeting, Beijing fumed.

Deputy foreign minister He Yafei summoned the French ambassador and bluntly told him: “It has undermined the political foundations of Sino-French and Sino-European ties.” A couple of days later, the website of the French embassy in Beijing came under cyber-attack. Even though Chinese foreign ministry spokesman Liu Jianchao declared: “China is against the hacking of the websites of the embassies of other nations,” a French diplomat told AFP that “the embassy website had been inaccessible for several days due to a massive cyber attack following President Nicolas Sarkozy’s weekend meeting with… Dalai Lama.”

During the US presidential elections, the networks of both Barack Obama and John McCain were attacked. Newsweek quoted an FBI agent: “A serious amount of files have been loaded off your system.” Though both camps had admitted that hackers ‘from an undisclosed foreign location’ targeted their network, nobody openly said China was responsible.

In December 2007, then US commerce secretary Carlos Gutierrez went to Beijing.

The National Journal in an article ‘China’s Cyber-Militia’ published in May 2008 alleged that Gutierrez was targeted: “Spyware programs designed to clandestinely remove information from personal computers and other electronic equipment were discovered on devices used by [the US secretary].” India is also on the hackers’ list, but nobody seems to worry. South Block continues to lie low. Our diplomats probably have more ‘pressing’ problems to handle.

But it is so serious that the Pentagon hinted at having spent at least $100 million in the last six months just to respond to and repair damage from cyber attacks. The US Strategic Command refused to divulge the cost of these cyber attacks, but the Obama administration is working full-time on a review of the nation’s cyber-security.

According to the ‘Internet Security Threat Report’ from Symantec: “Threats from cybercriminals, spammers and computer viruses continued to grow at an alarming pace in 2008”. A large percent of the cyber-attacks, particularly against government agencies, originate from China.

Many organisations do not have the resources to protect themselves against attacks.

A recent case that received some publicity is that of the Dalai Lama’s private office, penetrated by hackers.

According to a report entitled ‘Snooping Dragon: Social-malware Surveillance of the Tibetan Movement’, prepared by the computer lab of the University of Cambridge, the Dalai Lama’s office had for some time suspected something wrong.

A new book, The Dark Visitor by Scott J Henderson answers many questions. The author first gives a historic account of the hacking business in China with a few individuals in the late ’90s; he details the emergence of ‘celebrated’ groups such as the Honker Union of China and Red Hacker Alliance.

He then analyses in detail their methodology, hierarchy, ‘who they are’, their exploits and the content of their sites.

Unlike our Western counterparts, Chinese hackers tend to get more involved with politics because most of them are young, passionate and patriotic.” The most fascinating aspect of the Chinese hackers is that they are individuals with only loose links to government. Henderson explains: “One of the unique aspects of the Chinese hacker organisation is its nationalism, which is in stark contrast to the loner/anarchist culture many associate with the stereotypical Western hacker.” This sense of patriotism and their own ‘code’ make them act for China’s national honour and never hack inside China.

Shishir Nagaraja and Ross Anderson, the authors of Snooping Dragon explained the Dalai Lama’s office case: “While malware attacks are not new, two aspects of this case make it worth serious study.

First, it was a targeted surveillance attack designed to collect actionable intelligence for use by the police and security services of a repressive state. …Second, the modus operandi combined social phishing with high-grade malware. This combination of well-written malware with well-designed e-mail lures, which we call social malware, is devastatingly effective.” Another report ‘Tracking GhostNet: Investigating a Cyber Espionage Network’ gives even more alarming information.

Greg Walton, editor of the Information Warfare Monitor found 1,295 infected computers in 103 countries. He says: “GhostNet represents a network of compromised computers resident in high-value political, economic, and media locations spread across numerous countries worldwide. … The computers of diplomats, military attachés, secretaries to prime ministers, journalists and others are under the concealed control of unknown assailant(s).” Some computers in the embassies of India in the US, Belgium, Germany, Italy and Kuwait were found infected. The report affirms: “There are several possibilities for attribution. The most obvious explanation, and certainly the one in which the circumstantial evidence tilts the strongest, would be that this set of high profile targets has been exploited by the Chinese state for military and strategic-intelligence purposes.” Though most fingers point East, it is difficult to collect hard proof. Having personally been the victim of ‘circumstantial evidence’, I can say it is a rather unpleasant experience. After posting on my website a large collection of historical documents (including Chinese) related to the 1959 Tibetan uprising, my site has been hacked twice in two months. Not only is it a drag to restore the data, but as Nagaraja and Anderson have pointed, it could be more devastating in the future: “As socialmalware attacks spread, they are bound to target people such as accounts-payable and payroll staff who use computers to make payments. Prevention will be hard.” I wonder if Indian politicians have thought of engaging Dark Visitors to gather intelligence. The EC code of conduct is mute on the subject. But this is probably for the next elections.
Posted by Claude Arpi at 5:27 AM No comments:

The report says "The ITBP doesn't have access to the other side of the international boundary", but what about ISRO? 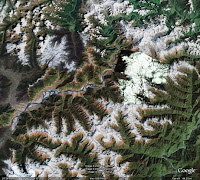 
GUWAHATI: The East Siang district administration in Arunachal Pradesh has yet to trace the exact spot where The Tsangpo has formed an artificial reservoir following a massive blockade because of to landslides.

"As the artificial reservoir is on the other side of the border, we haven't got any updates on the development. However, we have taken all precautionary measures to save lives and property in case the mudwall bursts," deputy commissioner Onit Paniyang said on Thursday.

On Wednesday, Paniyang had said the thickness of the mound was around 49 meters and the length of the reservoir was less than half a kilometre. "Even in case of any breach, the discharge of water from the reservoir would be less and the magnitude of floods would be minimal," he added. He said the ITBP had first informed the district administration about the artificial lake.

"The ITBP doesn't have access to the other side of the international boundary. So, they are also in the dark," the DC added. However, unconfirmed reports said the water level has started receding. The district administration is closely monitoring the situation.

An alert has been sounded in Dhemaji district of Assam bordering Arunachal Pradesh. Dhemaji and Siang districts suffered heavy loss of life and property when a wall of the reservoir collapsed in June 10, 2000.

"We are in consultation with the East Siang district administration on the status of the artificial reservoir," said Dhemaji deputy commissioner P Ashok Babu.

As the northeastern region is vulnerable to flash floods due to reservoir bursts in the Tibetan region, sources said it was high time the Centre chalks out a mechanism with China on sharing information on such things.
Posted by Claude Arpi at 6:53 AM No comments: