Hans on the Frontiers: The Worrying Message of Chairman Xi

From July 21 to 23, President Xi Jinping went on an 'inspection tour' of Central and Southern Tibet. His visit was widely commented upon in the world media; especially as it was the first after a gap of ten years.
As soon as the Chinese President landed in Nyingchi City (previously called Prefecture), near the Indian border of Arunachal Pradesh, bells rang in the security establishment in India.
The China Daily soon reported: “He [Xi] was warmly welcomed by local people and officials of various ethnic groups.”
Why mention ‘various ethnic groups’ in Tibet? You will soon understand.
In the meantime, the fact that Xi, who is also the Secretary General of the Communist Party of China (CPC) and Chairman of the Central Military Commission (CMC) was accompanied by Gen Zhang Youxia, a CMC Vice-Chairman, and the proximity of Bayi, the Headquarter of the forces facing India in Arunachal Pradesh, was noticed in Delhi.
On the first day, Xi inspected the ecological preservation of the Yarlung Tsangpo River’s basin (which becomes the Siang and Brahmaputra in India), Nyingchi’s planning hall and a ‘model’ village. Officially, he was briefed about the development planning for the region and the City’s progress in rural revitalization; the next day, Xi left for Lhasa by train, travelling on the newly inaugurated strategic section of the Sichuan-Tibet Railway.
The visit was analyzed by the China watchers in the context of the CPC’s 100th anniversary and the 70 anniversary of the so-called Liberation of Tibet (read ‘invasion’).
Though very few details filtered through at first, fresh quotes from the New Great Helmsman have now appeared in The Tibet Daily; they unfortunately confirm the worst worries of the Indian Government.
On August 2, The Tibet Daily published several quotes attributed to Xi Jinping during his interaction with the local officials; an entire series was consecrated to the border with India. Xi’s views are encapsulated in different slogans: “protecting the country [China], building hometowns [border villages], ensuring the defense of [China’s] border and consolidating border security.”
Xi Jinping emphasized that “the border area is the first line of defense and the barrier for the national security. We must strengthen the construction of border infrastructure, encourage people of all ethnic groups to take root in the border, protect the country or build their hometown."
Xi added that he had “ardent expectations for speeding up the construction of border areas. We have to be serious about it,” he said.
The remark about ‘all ethnic groups taking root on the border’ is a clear message that Beijing wants Han Chinese to settle on the Indian borders.
For India, it means a dramatic change of the demography on the frontier areas which has had a Tibetan-stock population since immemorial times.
Since 2017, the borders right from Arunachal Pradesh to Ladakh, have witnessed a mushrooming of new model villages in Tibet.
Xi Jinping had thus described China’s relations with Tibet: “Govern the nation by governing the borders; govern the borders by first stabilizing Tibet; ensure social harmony and stability in Tibet and strengthen the development of border regions.”
The local satraps in Tibet started immediately to implement the ‘vision’ of their boss and the Party propaganda did its best to entice the local Tibetan population to side with the Communist Party.
A new formula could be found in every speech of Tibet’s authorities, the inhabitants of China’s borders should be “the protectors of the sacred homeland and the builders of happy homes.”
And as usual, the Tibetans were not asked for their opinion.
The policy has taken a concrete shape with the growing number of ‘model’ villages on the Tibetan side of the Indian border, mainly north of Arunachal Pradesh, but also of Sikkim, Uttarakhand, Himachal Pradesh and Ladakh. Officially, these ‘Xiaogang’ (or moderately well-off) villages are linked with poverty alleviation and the defence of the borders.
But for first time on August 2, through the mouth of its ‘Core Leader’, China has admitted that it wanted these villages to be inhabited by ‘people of all ethic groups’, a metaphor for Han migrants from the Mainland.
Xi also insisted “on the simultaneous deployment of troops and the people, and equal emphasis on strengthening the border, and safeguarding the sacred land.”
It was a hint to the fast-paced recruitment of Tibetans into the PLA to ‘defend the border’, which again could be dramatic for India; this issue has recently been reported in the Indian media, but Xi’s words give the true magnitude of this worrying perspective.
The Tibet Daily also mentioned that while encouraging people to settle on the border, Xi asked the local population to “build a shared spiritual home for all ethnic groups”; this might not be an easy proposal.
All this brings to light a new scenario which was never contemplated earlier by the Indian Government, particularly for its security agencies and defence forces; Delhi has little choice but to immediately act to counter these nefarious moves. 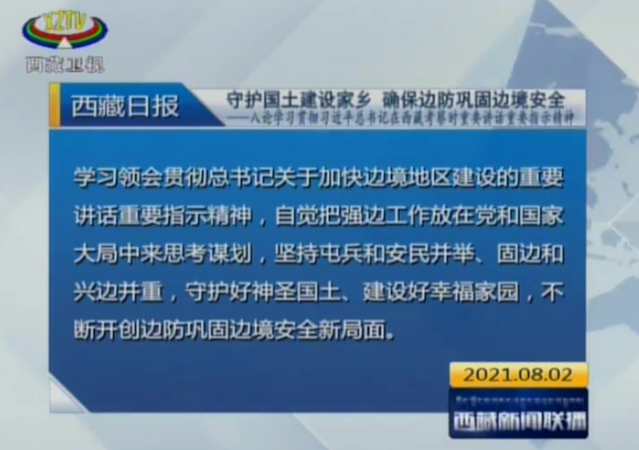