Pulamsamda vs Pulang Sumdo, another dispute in the Central Sector 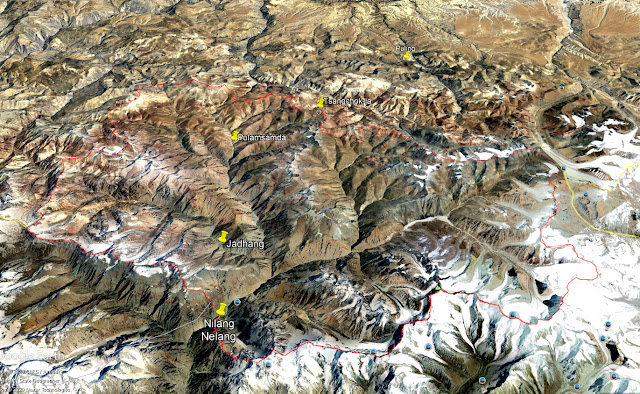 I continue today my study of the Middle Sector of the 4056-Kilometer boundary between India and China (this figure includes the areas occupied today by Pakistan – Gilgit and Baltistan).

areas, it is necessary to mention the case of Pulamsumdo, which is also part of the Nilang-Jadhang region.

The Basics
Let us remember the basics to determine a border, as explained in the Report of the Officials of India and China in 1960/61; the Indian Report says: “In the Middle Sector both sides had referred to the watershed boundary and were clear as to where the watershed lay. In fact, the two alignments coincided for the most part along the main watershed. The Chinese alignment departed from it only at Gyuand Kauirik, Shipki, Nilang-Jadhang, Barahoti, Lapthal and Sangchamalla. All these departures from the watershed were also the points of divergence from the Indian alignment, and were, curiously enough, to the south and west, so as to include Indian territory in Tibet, and in no case the other way round. These isolated and small departures always in one direction were difficult to comprehend and emphasized that the correct traditional boundary lay along the watershed itself.”
It was therefore clear that what was south of the watershed was India and north Tibet. This is an universally accepted principle to demarcate borders.
The Report of 1960 further noted: “In this sector the Chinese alignment are conformed for the most part to the traditional Indian alignment. Only in four areas did it diverge from the watershed to include certain pockets of Indian territory in China-the Spiti are (Chuva and Chuje), Shipki pass, the Nilang-Jadhang area (Sang and Tsungsha) and Barahoti (Wu-je) Sangchamalla and Lapthal. In this sector, therefore, it would be sufficient to prove the traditional and customary basis of the Indian alignment in these four areas.”
The Indian delegates argued that the traditional and customary boundary in this sector lay along the watershed range, marked by the passes of Tsangchok La, Mana, Niti, Tunjun La, Balcha Dhura, Kungri Bingri, Darma and Lipulekh; therefor “Nilang, Jadhang and Pulamsumda were in Uttarkashi district (formerly Tehri-Garhwal State), Barahoti in Garhwal district and Sangchamalla and Lapthal in Almora district, in Uttar Pradesh State.”
Apart from Nilang-Jadhang, this principle had never been disputed by the Tibetans.

A Fresh Absurd Dispute
The ‘dispute’ came from two places whose names sound slightly similar.
On April 29, 1954, India and China signed an agreement in Beijing: “The Government of the Republic of India and The Central People's Government of the People's Republic of China, Being desirous of promoting trade and cultural intercourse between Tibet Region of China and India and of facilitating pilgrimage and travel by the peoples of China and India, have resolved to enter into the present Agreement.”
This is remembered as the Panchsheel Agreement; let us forget about the pompous principles which will in any case, never be respected by China.
Article II (2) says:
The Government of China agrees to specify (1) Gartok, (2) Pulanchung (Taklakot), (3) Gyanima-Khargo, (4) Gyanima- Chakra, (5) Ramura, (6) Dongbra, (7) Pulang-Sumdo, (8) Nabra, (9) Shangtse and (10) Tashigong as markets for trade; the Government of India agrees that in future, when in accordance with the development and need of trade between the Ari [Ngari] District of Tibet Region of China and India, it has become necessary to specify markets for trade in the corresponding district in India adjacent to the Ari [Ngari] District of Tibet Region of China, it will be prepared to consider on the basis of equality and reciprocity to do so.”
Now, the Chinese came up with the argument that Pulamsumda in Nilang-Jadhang was Pulang-Sumdo mentioned in the 1954 Agreement.

More Explainations
The Indian Officials explained several times: “In spite of clear and repeated proofs furnished by the Indian Government in the 1954 negotiations and in the correspondence of recent years between the two Governments, the Chinese side once more brought forward their untenable claim that Puling [or Pulang] Sumdo, which is mentioned in the 1954 Agreement as one of the trade markets in the Ari [Ngari] District or Tibet is the locality in the Nilang-Jadhang area called Pulamsumda.”
In 1954, the Indian Delegation had communicated in writing to the Chinese side that the co-ordinates of Puling Sumdo (31° 19' North and 79° 27' East).
The co-ordinates of Pulamsumda, however were different (31° 18' North and 79° 8' East) as Pulamsumda was located on the south of the Sutlej-Ganges watershed and over twenty miles distance from Puling Sumdo on the north of the watershed and while Pulamsumda was a camping ground and Puling Sumdo had been a trademart in Tibet for the people of Nilang-Jadhang.
The Report of the Officials observed: “The reference in the 1954 Agreement was obviously to Puling Sumdo, because the Agreement formalized Indo Tibetan trade at customary trade marts. Clearly, therefore, there was no reason at all for confusing Puling Sumdo in Tibet and Pulamsamda in India. The Chinese side, however, persisted in doing so even though they were unable to bring forward any evidence that would even suggest that the two places were the same. They, for example, brought forward no evidence to show that Pulamsamda was a trade mart, which according to their argument it would have to be.”

India showed the evidence of administration of the area:

The Shikami Fard (List of Landowners and Tenants) of 1920 gave a list of the marusidars (owners of land) and Khaikars and Sirtans (tenants).
The Muntakib Parcha (Record of Holdings) listed the owners of holdings, areas of fields and the classes of soils, the names of marusidars who paid revenue to the Government, the names of sub-tenants who cultivated the lands of the marusidars, and the serial numbers of the fields allotted at the survey.
Among the grazing places mentioned were Pulamsumda, Rangmonchi and Thingthia, all in the Nilang-Jadhang area right up to the boundary alignment. It also says: “The Paro Mawesia (List of Camping Grounds), also prepared during the 1919-1920 settlement, listed the 136 camping grounds in the Tehri State. Forty-eight of these belonged to the Taknore Patti, and included Pulamsumda.”

No Quid pro quo earlier
There was no quid pro quo as long as Tibet was independent (though the entire Nilang-Jadhang area was claimed by Lhasa).
However in 1960, the Report of the Officials quoted a letter from the Chinese Premier Zhou Enlai accusing India of having invaded the ‘Chinese’ territory’.
The Report said: “The Indian side were most surprised that despite many and detailed explanations given by the Indian Government during the last six years, the Chinese side had again put forward a claim to Pulamsumda, which was well within Indian territory. The fact that the Chinese side quoted the letter of the Prime Minister of India of 26 September 1959 only showed that they had misunderstood that letter. When Premier Chou-En-lai, in his letter of 8 September 1959 [http://www.claudearpi.net/wp-content/uploads/2016/12/WhitePaper2NEW.pdf], accused India of having ‘invaded and occupied’ Puling Sumdo, the Indian Government were amazed, for Puling Sumdo was a Tibetan trade-mart north of the watershed, which had never been occupied by India.”
The Indian Officials further explained: “The only place whose name sounded at all like Puling Sumdo was Pulamsumda, and the Indian Government could only believe that the Chinese Government had confused the two places. So the Prime Minister of India stated in his reply of 26 September 1959 that when the Chinese Prime Minister spoke of Indian ‘occupation’ of Puling Sumdo, he doubtless had in mind Pulamsumda, a camping-ground in the Nilang-Jadhang area.”
The Indian Government reiterated: “But there was no cause for such a mistake, because even in the negotiations of 1954 the co-ordinates of the two places had been supplied to the Chinese Government. Pulamsumda was a camping-ground south of the watershed which had always been under Indian administration, whereas Puling Sumdo was a customary trade mart north of the watershed in Tibetan territory, and had never been occupied by India. It had been a trade-mart for centuries and it was as such a customary trade mart that it had been recognized in the 1954 Agreement.”

A Trade Mart for Decades
The Indian negotiators had given a copy of the report of the Trade Agent at Gyantse of 1942; it clearly stated that Puling Sumdo was a trade-mart in Tibet frequented by traders from Tehri State; there was, therefore, “no question of Pulamsumda and Puling Sumdo being the same place and the Chinese side had brought forward no evidence that could even faintly suggest that this was so.”
This shows that the Chinese were often coming unprepared for important meetings.
The question remains, can Beijing continue to claim Pulamsumda today?
It certainly could if the Communist leadership decides to create trouble on a grant scale in the Central Sector; niceties such watershed principle, customary borders, historical facts or even pure logic do not come into play for Beijing.