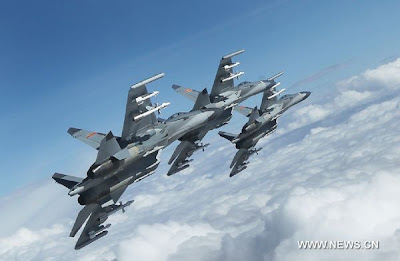 After the publication of the US report "Military and Security Developments Involving the People’s Republic of China 2010", two Indian national dailies titled 'China wary of India's military might'.
Well, I don't think it is correct, though India should wary of bit more of China's might.
I am posting below the few lines on India in the 83-page report.
Basically, China is just doing the necessary to be ready for any contingencies.
Regarding the DF-21 missiles (called CCS-5 by the Americans), I wrote about it two years ago. Nothing new. It is an ongoing process and the logical consequence of the railway line reaching Lhasa.
More interesting, regarding the 'contingency plans to move airborne troops into the region', The People's Daily recently mentioned that "Chinese paratroopers make 1st large-scale drop in Qinghai-Tibet's highlands" on August 13, 2010.
The article says: "A group of Chinese airborne forces parachuted into the Qinghai-Tibet Plateau on Aug. 9, marking the successful completion of the air force's first large-scale airborne drill in the plateaus.
The successful drill means that the Chinese air force now has the ability to carry out airborne operations in the highlands.
At 8 a.m. on Aug. 9, a group of airplanes flew through the clouds scattered over the high plateau of northwestern China as 600 fully-armed paratroops waited onboard for the order to jump.
The large-scale airborne drill in the plateaus had a series of obstacles that threatened the paratroopers, including thin air, less oxygen as well as strong wind zones stretching thousands of kilometers.
Yao Hengbin, the chief commander of the drill, said that they have undergone acclimatization training and had made plans for various emergencies ahead of the drill. They also have overcome the above difficulties.
At 8:35 a.m., the paratroopers bailed out of the planes, their shoots exploding outward one-by-one like so many flowers blossoming in air. And just after landing, they quickly launched attacks against mock targets.
Fan Xiaojun, the political commissar of the force operating the drill said that the operation was of great significance for the Chinese air force. It proved that the Chinese airborne force could implement operational tasks at any time for an emergency in the highlands."
What is an 'emergency' is another issue. US Report "Military and Security Developments Involving the People’s Republic of China 2010"
On India:
China has deepened its ties with India through increased trade, high-level dialogues, and an improved military-to-military relationship. China and India agreed to boost trade from $11.4 billion in 2007 to $40 billion in 2010, and they have held several rounds of dialogue over disputed territorial claims. Sino-Indian defense ties were institutionalized in 2007 with the establishment of an Annual Defense Dialogue and by conducting three bilateral defense exercises since 2007.
Nonetheless, Beijing remains concerned with persistent disputes along China’s shared border with India and the strategic ramifications of India’s rising economic, political, and military power. To improve regional deterrence, the PLA has replaced older liquid-fueled, nuclear capable CSS-3 intermediate-range ballistic missiles with more advanced and survivable solid-fueled CSS-5 MRBMs and may be developing contingency plans to move airborne troops into the region. China is currently investing in road development along the Sino-Indian border primarily to facilitate economic development in western China; improved roads would also support PLA border defense operations.
Posted by Claude Arpi at 11:41 AM