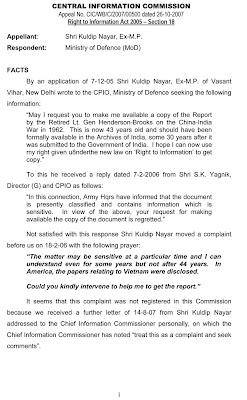 It is not fair of the Chief information Commissioner to speak of the incompetence of the Indian military top brass, without mentioning the names of the politicians who have selected the 'top brass'. As often, it is the Army which suffered and it is the Army which is been blamed. These  remarks were entirely unnecessary.
The Commission refused to declassify the Henderson Brooks on the ground that it could endanger national security (see CIC order on my website). The Bench (comprising Chief information Commissioner Wajahat Habibullah and Information Commissioner ML Sharma) said: "We have examined the report specifically in terms of its bearing on present national security. There is no doubt that the issue of the India- China border particularly along the North-east parts of India is still a live issue with ongoing negotiations between the two countries on this matter."
Well, it is possible that some portions of the Report mention the five rounds of border talks  between India and China in 1960 or other information related to the border (perhaps the situation in the Aksai Chin), but as it is admitted but the Army Headquarters the Report is only an internal review which did not engage the Army (or the Ministry of External Affairs). Col. Raj Shukla who represented the Army during the hearings said: "The report prepared by Lt. Gen. Henderson Brooks and Brig. Prem Bhagat was a part of internal review conducted on the orders of the then Chief of Army Staff Gen. Choudhary. Reports of internal review are not even submitted to Govt. let alone placed in the public domain. Disclosure of this information will amount to disclosure of the army’s operational strategy in the North-East and the discussion on deployments has a direct bearing on the question of the demarcation of the Line of Actual Control between India and China, a live issue under examination between the two countries at present."
The only logical thing that the CIC should have done was to ask for the declassification of the Report and request the Army (or the NSA) to sanitize the portions which could jeopardize the current negotiations with China.
The CIC was probably not aware that the Indian Defence Minister had, in reply to a question, announced in the Parliament on April 1, 1963 that an inquiry into the reverses in NEFA had been instituted. The Minister affirmed that a “thorough investigation had been ordered to find out what went wrong with (i) our training; (ii) our equipment; (iii) our system of command; (iv) the physical fitness of our troops and (v) the capacity of our Commanders at all levels to influence the men under them".
The purpose of the inquiry was to not witch-hunting, he said, but to 'derive military lessons' and to “bring out clearly what were the mistakes or deficiencies in the past, so as to ensure that in future the mistakes are not repeated and such deficiencies are quickly made up".
The Inquiry Committee was headed Lt.-Gen. T.B. Henderson-Brooks with Major-General P.S. Bhagat as a member, he announced.
How to learn lessons, if nobody can access the Report?


'Army brass inability in '62 war revealed'
Himanshi Dhawan, Times of India
Aug 26, 2010
NEW DELHI: Chief information commissioner Wajahat Habibullah on Wednesday said the Henderson-Brooks report -- the operation review of the 1962 Sino-India war -- revealed the incompetence of the Indian military top brass.
Habibullah, who read the report before rejecting journalist Kuldip Nayar's request to disclose the contents under the Right to Information Act, said, "The report reveals the incompetence of the military top brass. But that was not why we rejected the plea for its disclosure. The Commission felt that the the report hinged on the question, which are still items of negotiation between India and China."
While the government has been persistent in keeping the document under wraps through the years, there have been reports published-- notably by Neville Maxwell in 2001 -- that have divulged details of how things went wrong in 1962.
The Commission had denied disclosure of the Henderson Brooks report in 2009 on the ground that it could endanger national security.
"We have examined the report specifically in terms of its bearing on present national security. There is no doubt that the issue of the India- China border particularly along the North-east parts of India is still a live issue with ongoing negotiations between the two countries on this matter," CIC had reasoned last year.
"The disclosure of information of which the Henderson Brooks report carries considerable detail on what precipitated the war of 1962 between India and China will seriously compromise both security and the relationship between India and China, thus having a bearing on both internal and external security," it had added.
The Henderson Brooks report was prepared by Lt General Henderson Brooks and Brig Prem Bhagat as part of an internal review conducted on the Army's operation strategy in the North-east. The report was prepared on the orders of the then Chief of Army Staff General J N Chaudhuri.
Applicant Kuldip Nayar had requested for the report to be made public, arguing that the document was 43 years old, and should have been formally available in the National Archives of India.
On being denied the information, Nayar had also pointed out that the papers related to Vietnam had been disclosed by the USA and the administration could not use the plea that the information was classified and sensitive.
According to the defence ministry, the report was not even submitted to the government let alone placed in public domain. The report also included information on deployments that has a "direct bearing on the question of the demarcation of the Line of Control between India and China, a live issue under examination between the two countries at present".
Posted by Claude Arpi at 6:06 AM