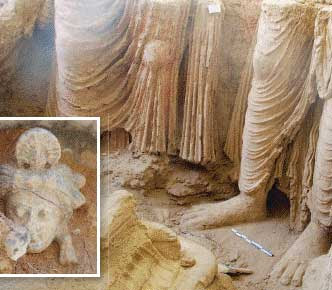 The day this article appeared  on Phayul.com, I came across another article on 'culture'.
Interviewed by Xinhua, the Chinese Minister for Culture Cai Wu blasted 'vulgar' media foreign cultural influences for having a growing profile in Chinese society.
The Minister lashed out at the country's broadcasters and publishers, saying much of what they produce is vulgar and kitsch.
Cai Wu said many Chinese publications were full of gossip and sensational stories advocating money-worship. He accused regional governments of spending money on 'vanity projects' instead of basic cultural facilities.
Cai squarely put the blame on China's market economy for this state of affairs.
Well, Mr Cai Wu, look at what your government is doing in Afghanistan. This is wild and vulgar market economy.Don't you think that when China is abroad, it should respect local 'basic cultural facilities'.
Last week, I had already written about the Chinese presence in Afghanistan in The New Indian Express.


Ancient Buddhist site faces threat from mining
Phayul
August 06, 2010
By Tenzin Tsering
Dharamsala, August 6 - A two millennia Buddhist site covering 4500 square metre monastery in Afghanistan’s Mes Aynak hill, faces impending demolition for mining, reported Andrew Lawyer to Sciencemagazine.com
A mining project worth $3 billion is awarded to China Metallurgical Group Corp by the Afghan government which plans to dynamite the ancient monastery located near the capital, Kabul.
It is estimated that China will extract 200,000 tons of copper and provide Afghan government with up to $400 million in annual revenues.
A group of Afghan French archaeologists who recently uncovered more than 100 statues, stupas, and a 5 metre long reclining Buddha among other relics have raised concern saying though the plan to blow up the monastery in last April was stalled, the proposition remains.
Chinese have started building a railroad, housing, and a power plant nearby, in preparation for mining.
Archaeologists are hoping to draw international support to save the historical site which will provide new information about how Buddhism flourished in the region and coexisted with Islam during one era.
“The monastery flourished from as early as the 2nd century BC until at least the 6th century AD although it may have continued as a settlement until as late as the 9th century AD” said Phillipe Marquis, head of the French Archaeologists’ team in Afghanistan.
He proposed a view saying “copper mining and the monastery can coexist by creating a protected archaeological area that eventually could generate tourism income” for the war torn country who are in desperate need of foreign revenues.
Marquis further added that “ Karzai ( President of Afghnaistan) is the one who can say no” and abort the annihilation of the ancient monastery.
“The site is huge and we have amazing remains. Time is running short.This place is going to be destroyed in a few months, and we need to find another solution—or the site is doomed” said Nader Rassouli, director of Afghanistan’s National Institute of Archeology.
AFP reported that the hill has already been heavily looted and quoted Marquis as saying, “the problem of plundering of historic sites in Afghanistan is not only an Afghan problem,it is also an international one.”
This latest threat on the Buddhist monument is reminiscent of the destruction of two monumental Buddha statues carved into a mountain at Banyam, Afghanistan by the Taliban a decade ago.
The two statues standing at 121 and 180 feet high were destroyed by the Taliban in early March 2001 calling them “idolatrous and un-Islamic”.
Posted by Claude Arpi at 7:59 AM