One flew over the Roof of the World 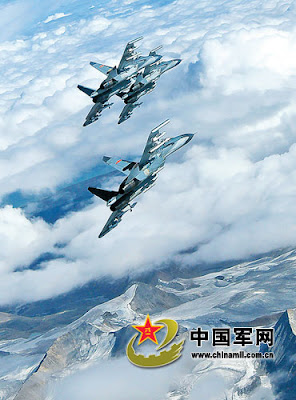 This news is a few weeks old, but I am still wondering why the PLA have chosen to publicize this 'training' now.
If one looks at the history of the railway line on the Tibetan plateau, it was first constructed with military objectives; to take minerals back to the mainland  and bring tourists in, was only a collateral.
This announcement is probably a way of reasserting the famous 'core interests' of the People's Republic of China.
It is an indirect answer to the US-Korea Joint exercises in the Yellow Sea and a warning to India, especially after the Pentagon Report on China military stated that "the PLA has replaced older liquid-fueled, nuclear capable CSS-3 intermediate-range ballistic missiles [DF4] with more advanced and survivable solid-fueled CSS-5 MRBMs [DF-21]".

PLA G3 fighters in training over plateau
PLA Daily
2010-07-30
Confrontation exercise
On July 27, the third-generation (G3) fighters of the PLA performed the live-shell patrol task for the first time over the plateau with a field occupation time of 8 hours, breaking a path of highly intensive training over the plateau, full load support and limit-challenging flight for the new type of fighters.
Since March this year, the officers and men of an aviation regiment of the air force of the Chengdu Military Area Command (MAC) were ordered to enter a plateau airport in Southwest China to conduct field bivouacked training, organize flights in complicated meteorological conditions, tactics and fighting method exploration flights and extreme performance property testing flights under plateau conditions as well as high-altitude flights training in the new-type fighters under the conditions of low oxygen content and poor fighter maneuverability, in a bid to effectively improve the troops’ combat ability under special plateau conditions.
Currently the proportion of the tactical training of the regiment in the field bivouacked training over the plateau stands at 80%.
By Li Dengke and Liu Yinghua
Posted by Claude Arpi at 6:14 AM