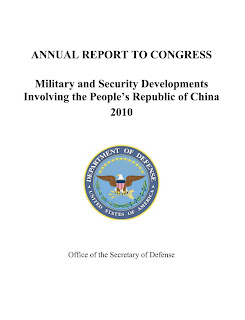 The annual report to the Congress Military and Security Developments Involving the People’s Republic of China 2010 has just been released by the Pentagon. I am posting here the Executive Summary. The situation is not rosy though at this point in time, the Pentagon would probably not like to antagonize Beijing further (after the joint exercises with South Korea). In fact, it purposefully delayed the publication of this Report.
A few days ago a report in the China Post in Taipei gave three days only to the PLA to invade the 'renegade' island.
From the China Post: "A computerized scenario carried out by Taiwan's military showed that in a war with China the island's capital Taipei would be in enemy hands in just three days, a report said yesterday.
Last month's simulation, attended by President Ma Ying-jeou, came amid warnings that China could increase its missiles aimed at Taiwan by several hundred to more than 1,900 this year, despite warming ties.
Under the scenario, assuming war in 2011, the People's Liberation Army (PLA) launched intensive air raids on Taiwan before sending in ground troops from sea and air, Next Magazine reported.
The war game found that Chinese troops could march into Taipei on the third day of hostilities, seizing control of Taiwan's top military command and the presidential office, it said, quoting unnamed sources."
It will be difficult for Taipei to catch up with the People's Republic advance. As the US Report put it: "The balance of cross-Strait military forces continues to shift in the mainland’s favor". A bit depressing! 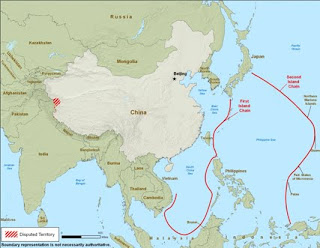 Executive Summary
Over the past 30 years, China has made great progress in its pursuit of economic growth and development, which has allowed China to achieve higher living standards for the Chinese people and has increased China’s international profile. These economic achievements, combined with progress in science and technology, have also enabled China to embark on a comprehensive transformation of its military. The pace and scope of China’s military modernization have increased over the past decade, enabling China’s armed forces to develop capabilities to contribute to the delivery of international public goods, as well as increase China’s options for using military force to gain diplomatic advantage or resolve disputes in its favor.
Earlier this decade, China began a new phase of military development by articulating roles and missions for the People’s Liberation Army (PLA) that go beyond China’s immediate territorial interests. Some of these missions and associated capabilities have allowed the PLA to contribute to international peacekeeping efforts, humanitarian assistance and disaster relief, and counterpiracy operations. The United States recognizes and welcomes these contributions. Other investments have allowed the PLA to pursue anti-access and area-denial strategies. Still others appear designed to improve the PLA’s ability for extended-range power projection, although China’s ability to sustain military power at a distance, today, remains limited. As the 2010 Quadrennial Defense Review Report notes, “China is developing and fielding large numbers of advanced medium-range ballistic and cruise missiles, new attack submarines equipped with advanced weapons, increasingly capable long-range air defense systems, electronic warfare and computer network attack capabilities, advanced fighter aircraft, and counter-space systems.”
Cross-Strait economic and cultural ties continued to make important progress in 2009. Despite these positive trends, China’s military build-up opposite the island continued unabated. The PLA is developing the capability to deter Taiwan independence or influence Taiwan to settle the dispute on Beijing’s terms while simultaneously attempting to deter, delay, or deny any possible U.S. support for the island in case of conflict. The balance of cross-Strait military forces continues to shift in the mainland’s favor.
The PLA has made modest improvements in the transparency of China’s military and security affairs. However, many uncertainties remain regarding how China will use its expanding military capabilities. The limited transparency in China’s military and security affairs enhances uncertainty and increases the potential for misunderstanding and miscalculation.
As President Obama has said, “[the U.S.-China] relationship has not been without disagreement and difficulty. But the notion that we must be adversaries is not pre-destined.” Sustained and reliable U.S.-China military-to-military relations support this goal by reducing mistrust, enhancing mutual understanding and broadening cooperation. China’s recurring decision to suspend military exchanges has impeded this effort. The Department of Defense will continue to use its interactions with China to encourage it to play a constructive role in addressing common security challenges in Asia and globally. At the same time, the Department of Defense has a special responsibility to monitor China’s military and to deter conflict. Through force posture, presence, capability developments, and actions to strengthen alliances and partnerships, the Department of Defense demonstrates the United States’ will and ability to maintain peace and stability in the Asia-Pacific.
Posted by Claude Arpi at 1:13 PM