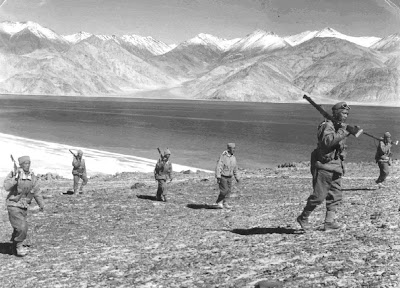 
China war papers denied to shield Nehru: Kuldip Nayar
2010-08-19
IANS
The government is trying to hide information on then prime minister Jawaharlal Nehru's role in the 1962 Sino-Indian war by refusing access to those war papers, says Kuldip Nayar, veteran journalist and a former Indian envoy to Britain.
Nayar filed a plea under the Right to Information Act three years ago to get access to classified papers relating to the 1962 war that humiliated New Delhi and led to the loss of 38,000 sq km of territory to the Chinese.
Six months ago, Nayar said the Central Information Commission turned down his request, saying the documents can't be revealed in the interest of national security. Now, he has approached the high court to get access to these crucial papers which he feels can throw light on who was responsible for India's crushing defeat in the war.
'I was told that military tactics can't be revealed. What's so sensitive about information on tactics nearly five decades after the war?' Nayar told IANS. Does that mean the tactics have not changed, he asked.
'There is a political angle and there is a military angle to the war. I wanted to find out who was really responsible for India's defeat: the military or political leadership,' said Nayar.
'There is so much criticism of Nehru on how the war went. My suspicion is they don't want to reveal these papers as they do not want questions to be raised on Nehru's leadership,' said Nayar.
The government is also sitting pretty on another plea of Nayar requesting access to documents pertaining to talks between Zulfikar Ali Bhutto and Swaran Singh, then foreign ministers of Pakistan and India respectively, after the 1965 India-Pakistan war.
The information commission has asked the government to consider the request but nothing has moved so far, Nayar said.
Asked why he was keen to get these papers, Nayar said there was a lot of pressure from Britain and the US on India to resolve the Kashmir issue after the 1965 war.
'There were five rounds of discussions between Swaran Singh and Bhutto on this issue. Their discussions on resolving the Kashmir issue are still relevant,' said Nayar.
Under Indian law, all documents could be made available to the archives 30 years after the incident.
'It's happening in the US and the UK. There is a great need for transparency about historical events. The government has clearly something to hide,' said an incensed Nayar.
Posted by Claude Arpi at 8:31 AM