The Dalai Lama and Indian PMs 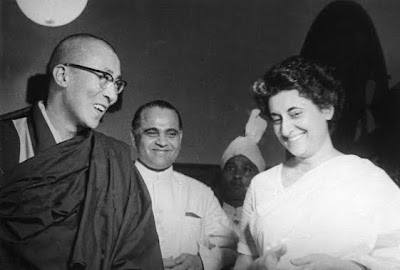 The Chinese are upset again. Since they have become a quasi-superpower, they are constantly unhappy over one thing or another. This time they are objecting because the Dalai Lama made a courtesy call to Prime Minister Manmohan Singh on August 11. The Tibetan leader wanted to thank India for the hospitality offered to his people for the past five decades.
Tempa Tsering, the Dalai Lama's representative in Delhi explained: “[The Dalai Lama] has been living in India for the past 50 years. There was nothing special about the meeting. He thanked the Prime Minister for [the] good care India has taken of him during this period." Though it was the first encounter with Dr. Manmohan Singh since the ruling United Progressive Alliance returned to power, the meeting was part of the Dalai Lama's regular interaction with Indian leaders, Tsering said.
China is often infuriated. In November last year, Beijing was incensed by the Dalai Lama’s visit to Arunachal Pradesh (they claim that the Indian State belongs to them); a month earlier when the Prime Minister campaigned in the North-Eastern State, he was advised by Beijing not to step into ‘Southern Tibet’, the name they use for Arunachal Pradesh.
Successive Indian Prime Ministers have always made it clear that the Dalai Lama was free to visit any part of the country and meet whoever he wanted.
For the past 56 years, the Tibetan leader has regularly met Indian Prime Ministers, but it is only recently that the Chinese have begun protesting so noisily. 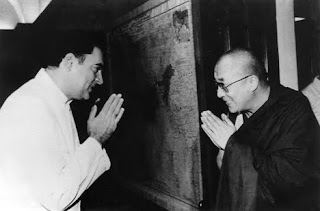 The Dalai Lama met India’s first PM Jawaharlal Nehru for the first time in Beijing in October 1954. He was introduced by Zhou Enlai, the Chinese Premier. As soon as the Dalai Lama settled down in India in 1959, Nehru visited him in Mussorie; they had a 4-hour meeting.
Lal Bahadur Shastri met the Tibetan leader before leaving for Tashkent. He even informed the Dalai Lama that the Government of India had decided to recognize the Tibetan Government-in-Exile. He told him that it would be done after he returned from the Soviet Union. Sadly (for India and Tibet), he never came back.
Indira Gandhi also met the Dalai Lama, as did Rajiv. In the 1980’s, the Dalai Lama wrote several letters to Rajiv Gandhi, particularly to inform him of his decision to propose to China a Five-Point Peace Plan in September 1987.
Usually these meetings are just courtesy calls and remain low key. The media gets to know after the event. However B. Raman, the former RAW official and counter-terrorism expert recalls that in 1993 Narasimha Rao took the initiative to inform Li Peng, the Chinese Premier beforehand that he was to meet the Dalai Lama. The Chinese immediately objected to the meeting. Narasimha Rao nevertheless went ahead and met the Tibetan leader. Thereafter, Indian Prime Ministers never informed Beijing. It is logical, as Beijing does not ask India’s permission to receive guests in the Great Hall of People. All over the world, it is the prerogative of the PM of an independent State to receive whoever he wants. 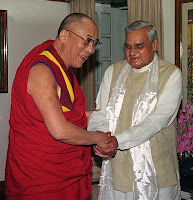 A meeting with Atal Bihari Vajpayee was rather strange. The Prime Minister was at his best, he remained silent for most of the encounter. I believe the Dalai Lama did not know about this old habit of the Prime Minister and was rather surprised. Vajpayee was possibly musing over the beautiful speeches he made on Tibet when he was a younger parliamentarian. Who knows!
This time, Beijing was rightly told by the Indian Foreign Minister that the Dalai Lama is an 'honoured' guest of India and the Prime Minister has every right to meet him.
In the meantime, the leaders in Beijing live in fear and take more and more repressive measures to 'control' the Tibetans. The purpose of the recent protest is probably to divert the attention from the happenings in Tibet.
For example two influential Tibetans, though they had close relations with the Communist regime have recently been arrested.
One is the well-known environmentalist and philanthropist Karma Samdup, while the other is Dorjee Tashi a Tibetan tycoon who ran a chain of hotels and a real estate business. Both have received awards from the Chinese government in the past.
Dorjee Tashi, known as ‘Yak Tashi’, was an incredibly successful Tibetan businessman until June 26 2010, when the Lhasa Municipality Intermediate People’s Court convicted him for “illegal business operations” in a three-day secret trial.
After the recent mudslides in Tibet, the Chinese Minister of Land and Resources Xu Shaoshi stated that “China recorded [mostly in Tibet] more than 26,000 geological disasters in the first seven months of this year, nearly 10 times the number in the same period last year.”
In Drugchu county alone 1,434 were killed and 331 are still missing. Though Beijing attributes the disasters to extreme weather conditions, it is clear that human (read Chinese) activities such as the construction of hundreds hydropower plants, large scale deforestation and wild mining have been the major factors triggering these ‘geological’ disasters.
This causes tremendous resentment amongst the local Tibetan population.
Take what could appear as a detail: the mudslide occurred in Drugchu county of Kanlho prefecture of Amdo province of Tibet. After the Chinese invasion, the Tibetan names have been changed to Zhouqu County of Gannan Autonomous Tibetan Prefecture of Gansu Province.
Recently, the Chinese leadership seems to have again entered a spiral of repression. On 18/19 August 2010, the dreaded Public Security Ministry (PSB) organized a meeting of the PSBs of all ethnic Tibetan areas to assess “the results and experiences of upholding public security, struggle against the current separatist movement, and identified current challenges facing stability in Tibetan areas.” They reviewed the tightening of security measures.
Two days earlier, the United Front Work Department, the Party Department dealing with minorities had a meeting at Shigatse also to “tighten religious institutions in Tibetan areas”. A dreadful program.
The main problem is that the Chinese leadership does not understand that the Dalai Lama could be their best ally if they were serious about wanting to sort out the Tibetan issue in a peaceful manner. Mao Zedong had understood this and when the Dalai Lama was in Beijing in 1954-55, the Great Helmsman used to visit him in his Guest House to 'convince' him to work with China. It worked to a certain extent. Former Party General Secretary Hu Yaobang had also understood this in the early 1980's, but he was unfortunately sidelined by the hardliners.

For Beijing, the best way to 'control' the Tibetans would be to make friend with the Dalai Lama and take him on board.
But the present leadership does not have the foresight to meet the Dalai Lama or even to send their Ambassador to Dharamsala for 'talks'. I am sure that the Dalai Lama would not even mind to drop in at the Chinese Embassy in Delhi and have tea with the Ambassador, if invited.
It is high time the Chinese leaders stop being ‘upset’. If they are really interested in China’s stability, they should just start a genuine dialogue with the Dalai Lama.