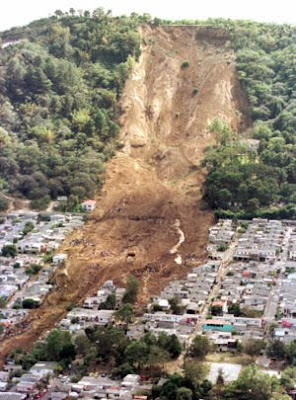 More than 700 dead bodies have alreday been found in Drugchu county of Amdo province in Tibet, (Zhouqu County of Gansu province for the Chinese).
This raises serious questions.
The Tibetan website Phayul.com answers partially these questions: "Past news reports and statistics of Drugchu county reveal heavy damming of the valley, mining and deforestation."
Tibetan blogger Woeser quotes several government report: "There are 47 hydroelectric power plant construction projects in the region and so far 15 hydroelectric power plants have been constructed, 14 more are under construction,” adding that local Tibetans believe the extensive construction projects have upset the fragile ecosystem of the region."
“Zhouqu has been ruined for long due to mining activities for many years. All the trees in the hillsides had been logged and you could see dark mud exposed in the air. The river has been polluted with gold rush and it is all muddy. The location of the town is downhill at the village. It is surrounded by cliffs and dangerous slope. Some buildings are constructed in the slopes. I visited the site many years ago, it is not suitable for human habitation. Actually, the town was also hit by the May 12 earthquake in 2008,” says a blogger.
The article of Reuters also quotes different reports and officials to prove that Drugchu faces today a man-made disaster.
The Chinese ogre needs more and more energy in the name of 'development'. But it has consequences on the environment. One can imagine what will happen if China decide to built the 38,000 Megawatts dam (twice the Three Gorges Dams) on the Yarlung Tsangpo (Brahmaputra). Not only the large chunk of the waters feeding Assam and Bangladesh will be diverted to China, but the construction and later the reservoir will create havoc in this eco-sensitive areas, north of the Indian border.It is just frightening to think about it.
Of course, the decision has not been officially taken as yet.
A couple of days back, the Minister of State for Environment and Forests Jairam Ramesh told the Rajya Sabha in a written reply: "China has so far denied any proposal for diversion of Brahmaputra water in China. As per the information available with Government of India, no instances of water diversion activity on river Brahmaputra have been noticed so far." Let us hope that the 'so far' will continue. 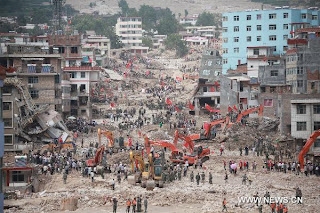 China officials saw landslide risks before disaster
Reuters,
Aug 10, 2010
By Chris Buckley
BEIJING (Reuters) - Officials have warned for years that heavy tree-felling and rapid hydro development were making a mountain area struck by China's deadliest mudslide in decades vulnerable to flooding and land slips.
Government reports last year urged work to restore a battered line of  environmental defences in a brittle landscape, deemed a "high-occurence disaster zone for landslides".
As of Tuesday, 702 people were listed as dead from the tsunami of mud,rocks and water that swept through the town of Zhouqu, in China's northwest this weekend. Another 1,042 are missing.
The Bailong river that rushes through the valley is swollen, some pent up behind a loose dam of landslide debris.
Officially, the landslide has been described as a natural disaster brought on by heavy rains, a drought that preceded it, and the huge 2008 earthquake that loosened the riverside slopes in Gannan Prefecture, the mountainous region of southern Gansu.
But government and media warnings about the fragile state of the 576-kilometre-long (358 mile) Bailong River go back years.
Government documents issued before the disaster said the river and its surrounding slopes were prey to manmade problems, as this poor corner of China sought to turn its forests and riverways into economic assets.
Specifically mentioning landslide risks in a document from April 2009, a government office overseeing the river highlighted the urgent need to rejuvenate the battered natural environment.
"Water volumes have fallen drastically, soil erosion is accelerating, and the trend of frequent land- and mudslides and other geological hazards has not been contained. The repair of the Bailong River basin must not brook delay," the report warned.
The problems are numerous, but widespread tree-felling along the river since the 1950s had caused "grave destruction to the natural environment,creating serious erosion, worsening geological hazards, frequent natural disasters, a fall in water absorption capacity and shrinking flows," it said. 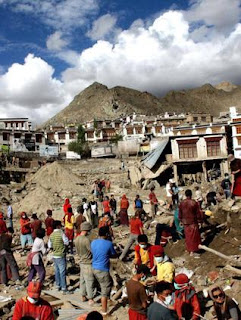 HYDRO DANGERS
An official in the area said that, like other rivers in western China, the Bailong River was over-exploited by rapid hydropower development.
Zhang Qirong, an official with the Bailong River forestry authority, told Reuters that the hydro dams appeared to have been a major factor -- after loosening caused by the 2008 earthquake -- in unleashing the landslides and clogging the river.
He said more than 13 hydro power stations operate in the stretch of the Bailong coursing through Zhouqu, including three big ones.
"Some bigger power stations do (ecological) repairs according to the regulations, but many of them are small power stations under individual investors...They're very lax."
In Diebu County upstream from Zhouqu, the natural brittleness of the environment, tree felling, mining and hydro development had created 228 potential hazard spots that "directly endanger a population of 97,000 people", according to a recent report.
"The Gannan section of the Bailong River has become one of the nation's high-occurence disaster zones for land- and mudslides" the proposal added.
In a recognition of the problems facing the Bailong River, China's State Council, or government cabinet, in 2008 approved a plan that to repair erosion and geological hazards there.
The plan would cost 7 billion yuan ($1 billion), Wang Yong, an environmental protection official in Gannan Prefecture, told the China Environmental News last year. ($1 = 6.77 yuan)
Posted by Claude Arpi at 8:00 AM