Some good news on the declassification front 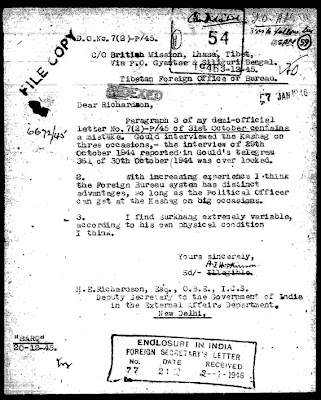 It is probably the beginning of a process, but no doubt the babus will fight hard to keep their 'secrets'. One should congratulate people like Kuldip Nayar or Inder Malhotra for the great work that they are doing to get the history of India free from the bureaucrats' (and politicians') hands.
It would be interesting to file a RTI to request the Government to declassify the content of the two letters sent by Nehru to President Kennedy on November 19, 1962.

"Here is what the Foreign Relations of the United States (US declassified history) says:
November 19, 1962, 8 pm

Eyes Only President, Secretary and SecDef. Verbatim Text.
Following is text of message dated today from Prime Minister to President, to be delivered by B.K. Nehru. Copy handed me this evening by M.J. Desai.
Begin Text.
[The letter conveyed in telegram 1891 was the first of two letters sent by Nehru to Kennedy on November 19. The second was delivered to the White House by the Indian Ambassador on the evening of November 19. The text of that letter was transmitted to the Embassy in New Delhi in telegram 2167, November 19. These letters have not been declassified by the Indian Government. In his biography of Nehru, Gopal summarized these two letters as follows:
["Nehru, apparently without consulting any of his Cabinet colleagues or officials, apart from the Foreign Secretary, M.J. Desai, wrote two letters to Kennedy describing the situation as 'really desperate' and requesting the immediate despatch of a minimum of twelve squadrons of supersonic all-weather fighters and the setting up of radar communications. American personnel would have to man these fighters and installations and protect Indian cities from air attacks by the Chinese till India personnel had been trained. If possible, the United States should also send planes flown by American personnel to assist the Indian Air Force in any battles with the Chinese in Indian air space; but aerial action by Indian elsewhere would be the responsibility of the Indian Air Force. Nehru also asked for two B - 47 bomber squadrons to enable India to strike at Chinese bases and air fields, but to learn to fly these planes Indian pilots and technicians would be sent immediately for training in the United States. All such assistance and equipment would be utilized solely against the Chinese." (Gopal, Jawaharlal Nehru, Vol. 3, pp. 228 - 229)] Galbraith [US Ambassador to India]"
And there are many more such historical treasures.

CIC asks govt to revisit declassification policy
Himanshi Dhawan,
Times of India
Aug 14, 2010,
NEW DELHI: Slamming the government for not having an effective declassification policy, Central Information Commission (CIC) directed the ministry of external affairs to "revisit" the policy and categorise records along the lines of the US and the UK.
The move came in reaction to an RTI application by veteran journalist Kuldip Nayar who had asked for records of 1962 talks between Indian foreign minister Swaran Singh and his Pakistani counterpart Zulfikar Ali Bhutto in the wake of the India-China war.
Incidentally, while the government denied Nayar the information, he told the commission that Pakistan was willing to disclose papers related to the talks but not to an Indian national as there was no such agreement between the two countries.
The commission also directed the government to set up a high level committee to decide on declassifying confidential records. The transparency watchdog said the committee should comprise secretaries from foreign, defence and home departments.
The decision came after a full-bench of the CIC perused all eight "top secret" files related to six rounds of talks between Singh and Bhutto during 1962-63.
"A committee comprising the foreign secretary, the defence secretary and the home secretary be constituted to address and finally decide whether the information in the instant case can actually be disseminated at present fully or partially after the passage of more than three decades of the incident," the commission said.
Nayar had sought these documents from the MEA but his request was rejected by the ministry citing exemption clauses of the RTI Act. The Bench had in March asked the ministry to produce these files for perusal.
The commission asked the ministry to revisit its declassification policy with respect to information existing in the form of old documents, particularly relating to events that took place more than 20 years ago.
The RTI Act allows disclosure of information which is more than two decades old if it does not attract three exemption clauses -- related to sovereignty and integrity of India and other interests of the state, breach of privilege of Parliament or state legislature and Cabinet papers including records of deliberations of the council of ministers, secretaries and other officers.
The panel directed MEA to consider the "automatic, systematic and mandatory declassification review" policy of the UK and the US while deciding on the issue with respect to old documents of historical and international significance. "The MEA will also have to decide whether the policy of withholding the information can be applicable in eternity," the commission said.
Posted by Claude Arpi at 7:53 AM