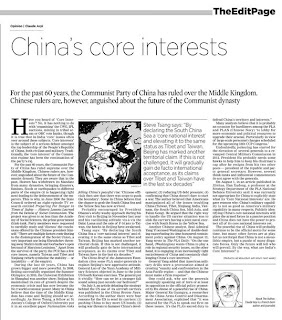 My article China’s core interests appeared today in The New Indian Express. Click here to read.
Once again, the visa row is part of the PLA asserting itself before the reconstitution of the Central Military Commission in 2012. India should just remain firm.
Beijing is playing with fire. If the Chinese side insists on Kashmir being disputed, Delhi could raise the Tibet issue.
Please note that the Communists have no opinion on the matter; as usual.

China denies visa to top general in charge of J&K
Indrani Bagchi
Times of India
August 27, 2010, 01.06am IST
NEW DELHI: India has cancelled defence exchanges with China after Beijing refused to allow the visit of the Indian army's General Officer Commanding-in-Chief, Northern Area Command, because he was responsible for Jammu & Kashmir, a state that China maintained was disputed.
In keeping with a practice for the past few years, the Indian defence establishment in June had began preparations for a regular high-level exchange visit to China this August by one of the top commanders of the Indian army — the northern area commander, Lt-Gen B S Jaswal.
However, Delhi was stunned when Beijing responded to his nomination by saying that it was unwilling to "welcome" Gen Jaswal because he "controlled" a disputed area, Jammu and Kashmir.
An angry New Delhi shot off a strongly worded demarche to Beijing, protesting its decision. Soon thereafter, India refused permission to two Chinese defence officials to come to India for a course at the National Defence College. A subsequent visit by Indian military officials to China was also cancelled by India.
To ensure that there was no ambiguity about the reason for its annoyance, New Delhi has since also bluntly told Beijing that the unexpected decision to block Lt-Gen Jaswal's visit to China was the reason behind India's decisions.
New Delhi found China's behaviour particularly provocative because in August 2009, Lt-Gen V K Singh, currently the Army chief and then the GOC-in-C Eastern Command, had visited China for a similar high-level exchange. If territorial sensitivity was the issue with China, then Singh's visit should have been even more problematic because, as head of the Eastern Command, he had jurisdiction over Arunachal Pradesh, a state that is claimed by China.
The Chinese have been needling India on Kashmir for a while. Beijing refuses to paste visas on the passports of residents of J&K, and staples them instead, despite repeated protests from India. As the Indian government refuses to recognize stapled visas as valid travel documents, the upshot is that the people of J&K can't visit China.
Beijing, in fact, also denies visas altogether to the residents of Arunachal, claiming them to be Chinese citizens. Still, it did not have any hesitation in "welcoming" Gen J J Singh as the head of the Eastern Command in May 2007. This would make it appear that Beijing was going a step further to needle New Delhi on Kashmir. New Delhi has, however, has not allowed this issue to spill over elsewhere in the bilateral ties.
China's aggressive approach on J&K is, of course, directly connected to its close relationship with Pakistan. China- Pakistan ties is viewed to be aimed at keeping India boxed in, and this manifests itself in many different ways. In 2008, China started construction activities in PoK, which India regarded as provocative. In 2010, China announced that it would supply two nuclear reactors to Pakistan.
Posted by Claude Arpi at 7:12 AM