The end of the peaceful rise? 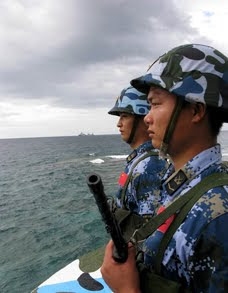 Once upon a time, (two/three years ago), the Middle Kingdom spoke of its 'peaceful rise'.
Now we don't hear any more this slogan coined by President Hu, it has been replaced by the 'core interests' of the People's Republic (and the Party).

On July 3, 2010, China Review News  published an article discussing the strategy behind the U.S. use of its aircraft carriers in the vicinity of the 'Chinese sea'.
For the author there were four reasons for the U.S. to send its carriers: (1) pushing China to buy more US bonds; (2) using war threats to hammer China’s development; (3) reducing US debt pressure; (4) confirming that China doesn’t dare to start a war.
The author believed that the U.S. heavily manipulates nearly all of the problems that trouble China today, such as issues regarding Taiwan, Tibet, Xinjiang, India, Vietnam, the South China Sea, Mid-Asia, and Falun Gong, etc. He sees the ultimate way to resolve China’s problems as being to weaken the U.S. The author further suggested that the right way to handle the U.S. carrier situation is to sink the carriers that are currently having a joint naval exercise with South Korea in the Yellow Sea."
This is not a very 'peaceful' attitude. The article from the China Brief of the Jamestown Foundation reproduced below illustrates the change in the Chinese strategy.

PLA Posturing for Conflict in the South China Sea?
China Brief Volume: 10 Issue: 16
August 5, 2010
Russell Hsiao
The recent revelation of a Second Artillery Corps (SAC) facility that is under development in China's southern coastal province, Guangdong, and the "unprecedented" maneuvers undertaken by the combined naval fleets of the People's Liberation Army Navy (PLAN) in the South China Sea are only the latest in a string of developments that suggest changes in Chinese strategic posture may be underway (AsiaEye, August 3; South China Morning Post, July 30). These developments appear to be part of a larger effort by the Chinese military to accelerate the re-posturing of its strategic forces in light of thawing cross-Strait relations and to add strength to China's increasingly assertive claims to the South China Sea and other areas that Beijing considers of "core interest."
The Chinese Foreign Ministry's rhetoric of cooperation in resolving territorial disputes in the South China Sea has been replaced by a tone that has grown increasingly assertive in recent years. The latest escalation of tension in the South China Sea is widely seen as a Chinese response to U.S. efforts to mediate competing claims in the region. Growing tensions have been accompanied by an increased level of Chinese naval activity and advances in military modernization that appear directed at countering U.S. capabilities to intervene in the region. Chinese Foreign Minister Yang Jiechi even went so far as to characterize the most recent U.S. overture as "an attack on China" (PRC Foreign Ministry website, July 26).
Following the tense exchange between Beijing and Washington, Chinese state-media reported that the PLAN was organizing a large-scale exercise in the South China Sea. PLA Chief of General Staff Chen Bingde and PLAN Commander Wu Shengli supervised the exercise. "We must pay close attention to changes in [regional] situations and the development of our mission; prepare ourselves for military struggle," Chief General Staff Chen was quoted by the state media as saying (South China Morning Post, July 30).
According to Xu Guangyu, a senior researcher of the China Arms Control and Disarmament Association, the three fleets of the PLAN regularly conduct separate exercises to mark the PLA's founding anniversary on August 1. "But of course, this time there is a strategic necessity to bring all three together for such a big joint mission" (South China Morning Post, July 30). The South China Sea exercise exhibited the PLA's comprehensive array of long-range attack capabilities, including missiles launched from submarines and fast-attack craft. More significantly, the exercise displayed the PLA's increasing capability to project force across a wide range of platforms.
China’s force posture appears to be evolving in tandem with the PLA's growing capabilities and adapting to shifts in the changing security environment. This trend is not limited to the Chinese Navy and Air Force but also the SAC.
The SAC’s relocation of a new brigade in the Guangzhou Military Region (MR) was highlighted by an August 3 entry on the Project 2049's AsiaEye, which reported that the Chinese state-run media unveiled a project to construct a new Second Artillery missile brigade—the 96166 Unit—in the northern Guangdong municipality of Shaogun (AsiaEye, August 3). 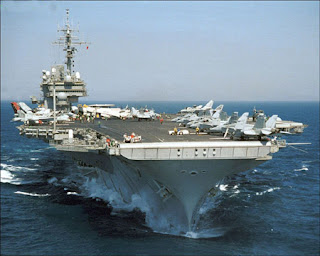 While the exact motive of relocating the brigade to Shaogun is not known, experts speculate that it may be equipped with the DF-21C medium-range ballistic missile or DF-21D anti-ship ballistic missile (ASBM). According to Retired Major Mark Stokes and Tiffany Ma, the authors of the Project 2049 report, the 96166 Unit’s move to Shaoguan also coincides with the permanent deployment of another possible DF-21-related unit in Guangdong. The 96219 Unit—which has been attached to a host DF-21 brigade in Chuxiong, Yunnan province—has reportedly been moved to Guangdong’s Qingyuan municipality. Another Second Artillery facility, which may be a forward deployment base for ground launched cruise missiles, is reportedly also under construction in the eastern suburbs of Sanya City on Hainan Island off the coast of Guangdong. These recent developments, they argue, "signal a possible broadening of the Second Artillery’s capabilities in alignment with China’s widening ‘core interests’ in the region" (AsiaEye, August 3).
Coupled with the over the horizon radar (OTHR) system under development on Hainan Island, these systems combined would provide the SAC with long-range, accurate targeting of United States carrier battle groups and other important naval assets in the region (See "China’s Conventional Cruise and Ballistic Missile Force Modernization and Deployment," China Brief, January 7). To be sure, China's development of anti-access capabilities could seriously complicate any U.S. ability to maneuver the maritime terrain in this region.
In the final analysis, China’s force posture appears to be evolving with the PLA's growing capabilities and adapting to shifts in the changing security environment. As the SACs' force modernization gains speed with the development of more advanced missiles, the role of the SAC in securing the strategic sea-lanes surrounding China’s coast appears to be growing. These new SAC assets could free up China's growing navy and air force to undertake operations farther from shore. As China continues to develop, field and expand its stock of weaponry, the possible deployment of anti-access capabilities, longer-range conventional ballistic missiles and anti-ship ballistic missiles—which are all under development—could seriously challenge U.S. strategic posture in the region. As time progresses, the PLA may have the ability to hold at risk all classes of targets in the western Pacific and South China Sea.
Posted by Claude Arpi at 9:40 AM

My take is that not many can actually see China for what it has been after - "expansionism". First, Tibet, Xinjiang, Hong Kong, Macau, then comes the Taiwan dispute, Aksai Chin & Arunchal Pradesh (disputed with India) and here comes the South China Sea haggle and the Gilgit stealth entry into Kashmir. The sad fact is global strategists are in denial and still can't see things for what they are and try to convince themselves and others that things could turn out to be better. If one can't decipher the pacific problem, all strategies will be pacific (pun intended). China has brilliantly managed their "peaceful rise" diplomacy and made a big fool off of global strategists all over. There is no such thing. China will continue to shamelessly proliferate and do as it pleases, and even more so with its newfound financial clout. The rest of us can thumb our noses and keep deliberating on yet another pacific strategy with a looming checkmate. Given the history of superbly clever cloaking of China's policies, my personal prediction is that China will not stop at becoming an Asian hegemon or a world hegemon, which it is destined to become anyway. The US maybe a hegemon today but it is not a true superpower, but China will become both in a real sense. Given all projections, not a single world power or even an alliance of world powers will be able to contain China in the future. Once China gets there which it will eventually, one can expect China to play smart games and take over regions in the Asia-Pacific, and further expand its powers so dramatically that none would be able to challenge it in a thousand years. Now that's what I call a grand strategy! I've already marked everything from Japan to Eastern Russia to Australia as China in my futuristic looking world map.