Power for Tibet or from Tibet? 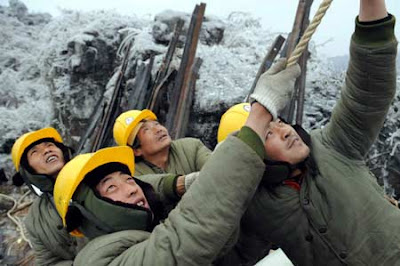 Considering that the Tibetan plateau has the greatest hydrological potential in the entire People's Republic (China's theoretical hydro-power resources have been estimated at 384 gigawatts), it is doubtful that this transmission line will be used to bring power from mainland to Tibet. It will probably the other way round. The purported dam on the Yarlung Tsangpo (Brahmaputra) itself has a potential of 38 gigawatts and there are several other hydropower projects planned in Tibet. One day, these hydropowers plants will  not only feed Qinghai Province, but also the entire Northern China and why not the mainland.


Tibet to end history of power shortage by 2012
2010-08-02
China Tibet Information Center
The construction of Qinghai-Tibet AC/DC Interconnection Project, the highest and most difficult power transmission project in the world kicked off simultaneously in Lhasa and Golmud on July 29. It is expected to solve the problem of long-lasting power shortage in Tibet Autonomous Region when it is completed by the end of 2012.
"Many local farmers and herders came to watch the groundbreaking ceremony on that day to memorize this historic moment," Pasang, a local Tibetan said excitedly. "The Qinghai-Tibet Interconnection Project is a 'heaven road' of power supply."
With a total investment of 16,286 billion yuan, the whole project covers a distance of as long as 1,774,200 km. The AC line starts from Xining, capital city of northwest China's Qinghai Province in the east, passing through the Riyue Mountain and Wulan and ends at Golmud in the west, while the DC line starts from Golmud and ends at Lhasa, capital city of TAR.
Power industry in TAR started from scratch since the Peaceful Liberation in 1951, which has greatly benefitted local citizens.
However, as the people's livelihood has significantly been improved with a rising demand for power, power shortage has became an increasingly urgent problem due to the underdeveloped power infrastructure in TAR.
The construction of the power grid is regarded as one of the key projects in China's west development strategy at present and in the long run, Chinese President Hu Jintao said at the work meeting on the Development of China's Western region at the beginning of this July.
The Interconnection Project went through the Qinghai-Tibet Plateau known for scarce oxygen and frozen earth on the highest highland in the world. It  has created unavoidable challenges in both technology and construction work, according to Li Wenyi, director of Construction Department of China's State Grid.
Over 900,000 meters of the 1,038,000-meter AC line will be set up at an altitude of 4,000 meters, with the highest point standing on Tanggula Mountain at 5,300 meters above the sea level. Besides, over 565,000 meters of the line will be buried under the highest frozen earth.
Most notably, the protection of ecological environment will be given a top priority during the construction because the planned project will wind over various forms of terrain, including the inhabited area, unpopulated land, the waterhead of the three rivers, Hoh Xil Nature Reserve, etc.
Posted by Claude Arpi at 7:24 AM