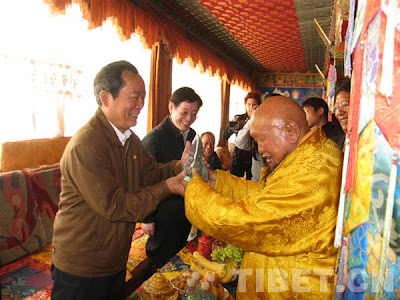 The Chinese leadership faces a serious problem with the revival of the religious interest in China. Mao used to say that 'religion is poison'. Fine, but now the Middle Kingdom counts a couple of hundred millions of religious practitioners. The question is how to keep this flock under the Party's control.
President Hu says that the Party 'mentors' should be "politically reliable, intellectually knowledgeable, and morally convincing."
Not easy to find such a rare birds.
Recently Zhu Weiqun, the Executive Vice Minister of the United Front Work Department which deals with minorities and religious issues, went to Tibet on an inspection tour. In Shigtse,, a met a good 'Living Buddha' ... from Italy.
Xinhau reported: "The Tibetan Gangjan Living Buddha from Italy, who just returned to TAR, presented white 'hada' [khata] to greet Vice Minister Zhu Weiqun. During his stay, Zhu and Gangjan Living Buddha planted two pine trees on the hillside in front of the Gangian Monstery to pray for the prosperity of China and the sound development of Tibetan Buddhism.
Zhu spoke highly of Gangjan Living Buddha for his love for China  and courage to stand up for truth and against the foreign separatist forces. Ganggian Living Buddha is a respectable Buddhist who has devoted himself to promoting Buddhist doctrines in Europe. He has won great respect among the European followers, according to Zhu."
Outsourcing is probably the best solution.

SARA Chief Speaks on Strengthening the Training and Education of Religious Personnel
On August 18, Wang Zuoan, the chief of the State Administration for Religious Affairs (SARA) gave a speech to representatives of patriotic religious leaders in Beijing, “Strengthen the Training and Education of Religious Personnel.” Wang pointed out that most of the religious personnel cannot keep up with the demands of the ever growing population of religious followers in China. The authorities ought to strengthen training and education, implement filing and recording systems, and emphasize supervision and management. In particular, Wang mentioned Hu Jintao’s “hope” for religious personnel – “politically reliable, intellectually knowledgeable, and morally convincing.”
Source: Web site of United Front Work of Central Committee of Chinese Communist Party.
http://www.zytzb.cn/09/newscenter/benwang/201008/t20100819_676230.html
Posted by Claude Arpi at 7:24 AM