Sri Aurobindo and the Future of Humanity 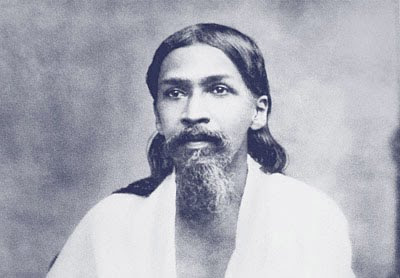 Today we are celebrating the 63rd anniversary of India's Independence, but also Sri Aurobindo's birthday.
It was perhaps a coincidence or my good ‘karma’, but when I came as a backpacker traveling from France to India in 1972, I carried a book for the travel. This French translation of The Life Divine, Sri Aurobindo’s magnum opus was to greatly influence my life and answer a vital question for me: should the ‘outside world’ be transformed in something beautiful ‘which works’ or should the material world be abandoned and all life devoted to reaching ‘higher’ realms?
Frankly, I had some reservations. Traveling for a couple of months in India in the early seventies was a shock for a foreigner. The dirt, the chaos in the big cities, the lack of ‘modern’ facilities, the blaring of loud speakers, the crowds, all these were a constant reminder that things were not so bad in Europe where trains ran on time, towns were clean, information was easily available to the public, hygiene a way of life.
Some of Sri Aurobindo’s words went home: “The affirmation of a divine life upon earth and an immortal sense in mortal existence can have no base unless we recognise not only eternal Spirit as the inhabitant of this bodily mansion, the wearer of this mutable robe, but accept Matter of which it is made, as a fit and noble material out of which He weaves constantly His garbs, builds recurrently the unending series of His mansions.”
Matter had to be transformed in the image of the Spirit. In the same work, Sri Aurobindo noted: “The earliest preoccupation of man in his awakened thoughts and, as it seems, his inevitable and ultimate preoccupation… [is]  the impulse towards perfection, the search after pure Truth and unmixed Bliss, the sense of a secret immortality”.
Unfortunately, as he put it: “These persistent ideals of the race are at once the contradiction of its normal experience.” This central contradiction had to be worked out; Matter and Life had to be transformed.
This second discovery decided me: I did not want to spend my life in a Himalayan cave, but to live more a ‘concrete’ life. Two years later, I left France for Auroville, the ‘Universal City’ near Pondicherry whose ideals, defined by its founder, the Mother, corresponded more to my search: ”Auroville will be a site of material and spiritual researches for a living embodiment of an actual Human Unity.”