The Nalanda Tradition excluded from Nalanda 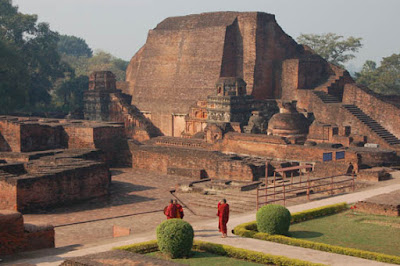 Its unfortunate that an intellectual like Dr.Sen deliberately fails to see and acknowledge "the ocean of wisdom" beyond the institutional title of the "Dalai Lama". Dr.Sen's statement seems like a blunt attempt to juggle between politics and reality and appease all the stakeholders.

They seem to be engaged in an idea to resurrect only the physical ruins and not the academia. If they like, the Dalai Lama is the living encyclopedia and ardent practitioner of the Nalanda school of thought. Unfortunately they seem to have a myopic view and liken Nalanda university to that of Oxford or Cambridge. That is the yardstick that they employ, how unfortunate!

His Holiness will definitely be more interested in seeing the revival of Nalanda university than to sit as a "mentor" to the project. Without the directions and blessings of the Dalai Lama, this project is just another project and not the revival of Nalanda school of thought rather than the architecture. The Tibetans have remained a pious and steadfast student of the Nalanda Buddhist tradition for centuries and only the Tibetans can lead to the development of the prototype of the Madhyamik Buddhism taught and debated in the ancient Nalanda university. Without a Sungshuk (blessed fillings for consecration), a statue of Buddha is just another physical statue. If the plan is just to recreate the original architecture, Dr.Sen and his team is on the right path. If it is about the revival of Nalanda school of thought, His Holiness the Dalai Lama is indispensable as Adam Smith is to classical economics!

This problem is not unique to the Nalanda University restoration project. Some years ago, a Pali linguist called Dr. Suwanda Sugunasiri tried to establish a Nalanda College of Buddhist Studies at the University of Toronto. Although this school should be based on the Nalanda Tradition, based on the name, or at least universalist, in fact it was a sham Theravadin school. Buddhism has become a sectarian religion.