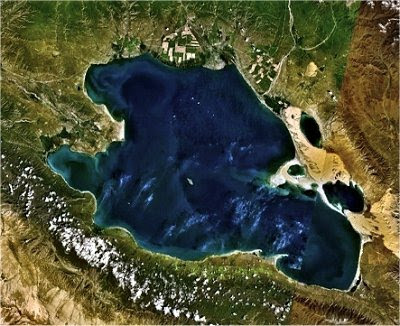 The Kokonor Lake (Qinghai Lake) is probably expanding  due to the climate change and the melting of glaciers in Amdo (Qinghai) province. This a rather disturbing news. Though the Chinese government will pretend that it is due to the environmental protection work that have done, global warming is probably the main factor.
A recent scientific study "Paleoenvironmental and archaeological investigations at Qinghai Lake, western China: Geomorphic and chronometric evidence of lake level history" published in the Quaternary International explains the importance of environmental changes to determine the successive levels of the lake: "Qinghai Lake, located on the northeastern Qinghai–Tibet Plateau is China’s largest extant closed-basin lake. Its position relative to major Asian climate systems makes it sensitive to global climate change. The lake has been the subject of numerous paleoenvironmental investigations including dating of shoreline features around the lake basin. Here we report new age estimates of shoreline features, geomorphic exposures and archaeological sites that contribute to the development of a lake level history for Qinghai Lake and a landscape model of the Qinghai Lake Basin."


China's largest saltwater lake grows after 50 years of shrinking
2010-08-02 07
Xinhua
The surface area of China's largest saltwater lake had grown in size over the past five years amid increased rain and decreased evaporation, an expert from the Qinghai Provincial Center of Geomatics said Saturday.
The surface area of the Qinghai Lake had reached 4,249.3 square kilometers, 4.3 square kilometers more than in 2005, Wang Yuan, deputy director of the center, said.
"The year 2005 was a turning point. Before then, the lake's size was decreasing due to climate change and human activities," Wang said.
The government's environmental protection work had contributed to the increase in surface area, Wang said.
The lake's surface area shrunk more than 300 square kilometers beginning in the 1950s, according to the Qinghai Province Meteorological Sciences Academy.
Posted by Claude Arpi at 7:33 AM