No airport for Tawang 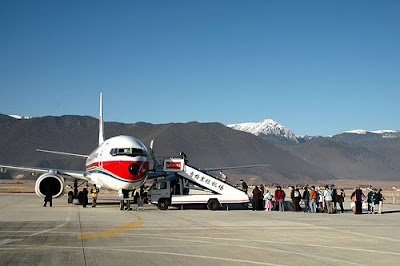 While on the other side of the McMahon Line, Nyingchi (Tibetan: Nyingtri) is gearing up to receive 1 million visitors, the Indian Defence Ministry is stubbornly refusing to have an airport in Tawang.
What to say, except that India will never catch up with China in defence preparedness. Let us not fool ourselves, the Chinese will use the 'civilian' infrastructure in case of conflict with India. A few days back China admitted that the train to Lhasa was used by the PLAs. In fact, there is nothing wrong in this. What is wrong is the attitude of the Ministry of Defence.
Read also my April posting on the railway to Nyingchi.


Defence Ministry rejects proposal for Tawang airport
9 Aug 2010, PTI
ITANAGAR: The Defence Ministry has rejected a proposal to construct an airport at the Buddhist town of Tawang as it is located close to the Sino-India border, the state government said today.
"They have rejected the proposal but I have taken up the issue with Defence Minister A K Antony and he has assured me to relook into the demand," Arunachal Pradesh Chief Minister Dorjee Khandu told reporters here.
At present Tawang, the home district of Khandu, is linked by a daily helicopter service from Guwahati through Bhutan.
Meanwhile, the chief minister alleged that even though the clearance for a greenfield airport at Itanagar has been obtained, the civil aviation ministry is delaying construction.
"I dont know why the NCP, which is a coalition partner of the UPA government is taking a step-motherly attitude towards the Congress-ruled Arunachal," he said.
The state govt has proposed airdropping of PDS items, especially in border areas to mitigate the hardships of the people, Khandu said adding that eight unused advanced landing grounds in different parts of the state have been handed over to the Defence Ministry for their revival.
Posted by Claude Arpi at 7:29 AM