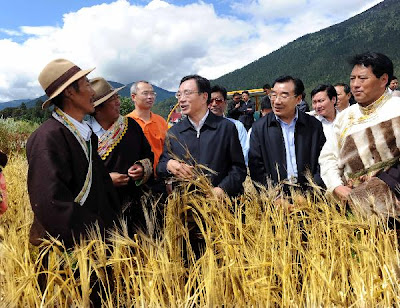 I am always surprised by the 'official' photos of Party bosses' visit in the countryside. Since 1949, they all look alike.
I am sure that once the the photo is taken, the local Party cadres get back the chubas (Tibetan dresses) from the 'poor farmers' as well as the pots with wheat or barley. They are required for the next photo session!
A friend of mine told that during the Cultural Revolution he knew of a factory which had been put up just for a photo session with a VIP. Can you believe it?
Let us hope that Mr He will give a good 'inspection' report to his colleagues of the Standing Committee of the Politburo.

Senior Chinese leader stresses Tibet's development, stability
2010-08-17
Xinhua
He Guoqiang (C Front), a member of the Standing Committee of the Political Bureau of the Central Committee of the Communist Party of China (CPC) and chief of the CPC Central Commission for Discipline Inspection, talks with local farmers of the Tibetan ethnic group at Zhaxigang Village in Nyingchi County, southwest China's Tibet Autonomous Region, Aug. 14, 2010. He Guoqiang made an inspection tour in Tibet Autonomous Region on Aug. 13-16, photo from Xinhua.
A senior Chinese leader has called on local various-level governments and people in Tibet to make continuous efforts to achieve "leapfrog development and lasting stability" in the autonomous region.
He Guoqiang, a member of the Standing Committee of the Political Bureau of the Communist Party of China (CPC) Central Committee, made the remarks during his four-day inspection tour of Tibet that ended Monday.
He asked officials and people of all ethnic groups in Tibet to seize the available opportunities and to unite to promote the development and stability of the region.
During his inspection tour, He visited communities, villages, a virgin forest in Nyingchi and the Potala Palace.
At a meeting with people from the religious circles, He encouraged the monks to promote patriotism and called on them to contribute to the prosperity and ethnic unity in Tibet.
He, in charge of disciplinary and supervision work, also asked local disciplinary and supervision personnel to promote clean governance and to intensify the fight against corruption.
On a separate inspection tour in Tibet from Aug. 13-15, Du Qinglin, head of the United Front Work Department of the CPC Central Committee, asked monasteries to promote legal, standardized and scientific management.
Du, also vice chairman of the National Committee of the Chinese People's Political Consultative Conference, asked local authorities to focus more on increasing the income and improve living standards of people from all ethnic groups in the area.
During his tour, Du visited farmers and herdsmen, old CPC members, and monasteries in Lhasa, Xigaze, and Shannan(Lhoka).
Posted by Claude Arpi at 7:43 AM