The logical outcome of deforestation and dams 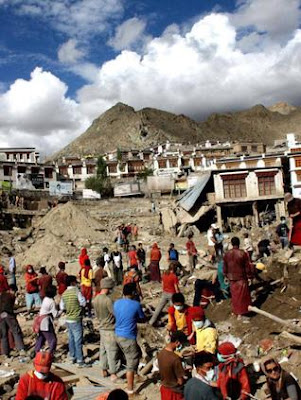 Read this report from Green Earth Volunteers (China Environment Brief).
What to say?
It had to happened. The Tibetans believe in Karma, but it is here purely a physical Law of Nature. The trees retaining the soil are cut, there is nothing left to anchor the soil which, at the first torrential rain becomes mud.

A Report prepared by the Central Tibetan Administration in Dharamsala had pointed out: "The first natural resource to be consumed in a modern way was the great forest of eastern Tibet. This is the best watered part of Tibet, and has long had mature forests of spruce, fir, juniper, larch, cypress, oak, bamboo and rhododendron on its steep slopes, perched above the wild mountain rivers that rush toward lowland Asia. These forests have served many purposes to Tibetans for centuries. They were sustainable sources of shelter, rest,firewood, mushrooms, medicinal plants and construction timber. While the nomads may have occasionally cleared a section of forest in order to expand their pastures, they preserved the majority of the forest, especially on the northern face (Daniel Winkler).
Following the Chinese occupation, chainsaws tore into the Tibetan forests all through the 1960s, 1970s, 1980s and well into the late 1990s, clearing whole valleys of all their trees without exception, and leaving the mountain slopes without protection from erosion. The felled trees were often simply slid into the rivers, to be recovered downstream in lowland China. Innumerable logs were damaged or smashed en route by the wild mountain rivers,making their sacrifice senseless."
The worse is that it is still the Tibetans who pay the heavy toll. This is not Karma.

Overdevelopment may have caused Zhouqu landslides
(Compiled by Green Earth Volunteers' China Environment Brief)
As of 5:20 p.m. on August 11, the worst mudslide ever to hit Zhouqu County, which is in Gansu Province’s Gannan Tibetan Autonomous Prefecture, had claimed 1,117 lives and left 627 people missing. The place hardest hit by the natural disaster Sanyan Yugou, experienced large-scale mudslides in 1978, 1989 and 1992. These mudslides destroyed 842 houses, killed two people and left 194 others injured. Nearly every year mudslides in the area damage roads.
A Xinhua news article published on Wednesday said the causes of the Zhouqu mudslide were the “mountainous terrain and loss of ground cover” and, according to the deputy director of the Department of Geological Environment at the Ministry of Land and Resources, “a lingering drought lasting almost 9 months in some local areas and the 2008 Sichuan earthquake that might have loosened the mountainside and caused some cracks are also reasons behind the devastating mudslide.”
An article from Xinmin Evening News [which is the source for all but the previous paragraph of this summary] discussed early warnings of a large-scale mudslide and possible human causes of the disaster.
In the 1980s experts suggested that Zhouqu County be relocated. Five years ago, county investigations identified 86 places that were in danger of landslides. In 1997, Ma Dongta, an engineering expert in natural disaster prevention at the Chinese Academy of Sciences’ Chengdu Institute of Mountain Hazards and Environment, wrote in a public paper that if a large-scale mudslide were to occur in Sanyan Yugou, the losses of the disaster would be greater than those experienced in 1992.
After the earthquake in Wenchuan, Sichuan Province in 2008, the land ministry was particularly concerned about landslides. A team of investigators sent by the ministry found 57 areas in Zhouqu at risk of landslides and also advised that the county be relocated in order to reduce losses from natural disasters.
Relocation is difficult, however, because more than 30% of county residents are Tibetan minorities accustomed to living on mountain sides and making a living raising ruit trees, county funds are tight and there is nowhere to go.
According to public data, since 2003, several preferential policies released in the county have spurred the development of hydropower. In five years, contracts for 53 hydropower construction projects were signed, with 41 of them either completed or under construction. The projects have accumulated a slag heap of more than 38 million cubic meters and estimated soil erosion of 749,000 tons. These projects account for more than 80% of construction projects in the county.
Geology expert Fan Shao said that although there is currently insufficient evidence to prove that the mudslides are directly related to hydropower construction, the effect of large-scale engineering projects on geological conditions cannot be ignored and may speed soil erosion. “Hydropower is Gannan’s economic backbone, but if you only consider short-term economic gain, you may eventually face heavier environmental and human losses,” Shao said.
Driving along the Bailongjiang River, there are many hydropower stations of various sizes. “Including all of its tributaries, in total, there should be nearly 1,000, most of which are small power stations with capacity of a few hundred kilowatts,” according to Bailongjiang Forestry Management Administration worker Zhang Qirong.
The hasty development of some of the projects has created potential danger. One week before the recent mudslide, one hydropower station was cited for a series of problems including incomplete safety measures at its materials processing plant and disposal areas. These problems were found to be causing soil erosion.
“I heard my grandpa say that 50 years ago the mountains were covered in dense forest,” said a student at Zhouqu’s No. 3 Middle School. “Now, every year my school takes a trip to plant trees on the mountain side, but the trees survive only rarely.” From August 1952, when Zhouqu’s forestry administration was established, until 1990, about 126,500 hectares of county forest were used for lumbering, with 100,000 cubic meters of forest cut down each year.
At the same time, large-scale cultivation was underway. Zhouqu is an impoverished county, in which about 90% of residents are farmers. Today, all of the land in the county with inclines of less than 40 degrees has been cleared for farming.
Recently, Gansu Province Civil Affairs Bureau Director General Tian Baozhong said that, though plans remain undecided, it was unlikely that reconstruction of Zhouqu County would occur in its current location. According to Tian, a memorial might be erected at the site of the mudslide.
[Source: Xinmin Evening News
Posted by Claude Arpi at 8:25 AM