The cost of wild development 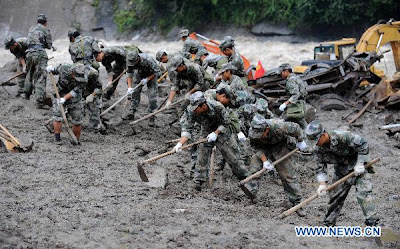 Obviously, these 26,000 'geological' disasters  are mainly due to the wild development witnessed in China for the past 30 years. 'To get rich is glorious is fine', but it has a price. Deforestation, mining, big or small dams comes with the cost. If this is taken into account (it is what is called Green GDP), China is not doing so well, even though the Middle Kingdom recently became the No 2 World Economic Power. India should also think before undertaking wild development, particularly mega hydro-power plants.

China hit by 26,000 geological disasters this year
Press Trust Of India
Beijing, August 22, 2010
With worst ever geological disasters hitting China in 2010, questions are being raised over the strategy to construct mega dams to divert river waters.
China recorded more than 26,000 geological disasters in the first seven months of this year, nearly 10 times the number in the same period last year, Minister of Land and Resources Xu Shaoshi said.
There were only 10,500 geological disasters in China in 2009. This year several counties were hit by mudslides engulfing several multi-storey buildings virtually burying the inmates alive.
In the massive mudslides in Zhouqu County, northwest China's Gansu Province this month 1,434 were killed and 331 were still missing.
Twenty three people were killed in Puladi Township in Gongshan in southwest China's Yunnan Province, two days ago.
Sixty nine others are still missing. Over 2000 people were killed and several hundreds missing in relentless floods this year so far.
Xu attributed the disasters to frequent extreme weather conditions such as severe drought and rainstorms, as well as to the impact of seismic activities and ruled out big dams like Three Gorges, which is the world's biggest dam of its kind responsible.
It was a misconception to blame the mudslides ravaging northwest China on hydropower plants the country has built along major rivers.
"The earthquake jolted many mountains which loosened the earth, the strong rain softened the slopes and landslides happen," Xu said.
He denied that the hydropower plants on Chinese rivers were to be blamed for the frequent mudslides, saying their construction and the disasters were only a coincidence.
"The recent mudslides were absolutely not related to the hydropower stations," he was quoted as saying in the official media here.
China has about 20,000 potential mudslide slopes, most of them in the west, Xu said.
His comments came as dams were increasingly being blamed for floods, landslides and earthquakes due to large scale diversion of river waters.
Besides this year's floods and mudslides, China experienced two major earthquakes during the last two years.
The earthquake in Sichuan province bordering Tibet in 2008 in which about 68,000 people killed.
This year yet another earthquake struck the neighbouring Qinghai where about 2700 people were killed.
Geological disasters such as landslides and mudslides cannot be adequately predicted by current scientific means, Zhang Zuochen, a geologist with China University of Geosciences said.
"We can only predict that a gully is vulnerable to a mudslide and that the disaster will occur under specific circumstances. But we cannot predict when it will occur," Zhang said.
Posted by Claude Arpi at 7:26 AM