Are the Tibetans happy? 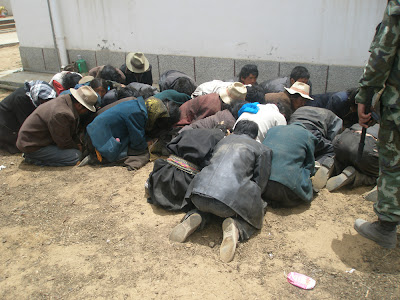 These figures published by Xinhua are very impressive, but they do not take into account one factor that is 'happiness'.
In 1972, the former King of Bhutan, Jigme Singye Wangchuck  invented the concept of gross national happiness (GNH). It was an attempt to define 'indicators' measuring quality of life or social progress in a more holistic term than gross domestic product (GDP).
Padma Choling, the 'governor' of Tibet has probably never heard of this concept. He recently said that "the fight against the Dalai Lama clique is meant to be lasting, intense, complicated, and sometimes fought vehemently."
What about the fight against 'unhappiness'?
By the way, the infrastructure and roads mentioned in this article are not for the happiness of the people of Tibet, but to bring Han tourists (11 millions this year) to Tibet and provide the PLA the necessary infrastructure 'to defend China's borders'.
To give an idea of the figures, 1 dollar is about 6 yuans.


Figures tell Tibet's development in five years
2011-01-18
Xinhua & People's Daily
Tibet's regional government leader Padma Choling has said, at the local parliamentary session, that Tibet is at its best period, citing figures to review the plateau region's development over the past five years.

NEW HOMES FOR 1.43 MILLION HERDERS
Tibet launched an ambitious "new countryside" program in 2006 to improve housing conditions for farmers, herders and other low-income groups.
With a 17-billion yuan investment from the state treasury, Tibet has provided new homes for about 300,000 families with a combined population of 1.43 million.
Another 185,500 families are expected to move into new homes by 2013, with access to safe drinking water, electricity, road, telecommunication, natural gas, radio and television as well as postal services.

10.1 BILLION YUAN FOR ENVIRONMENTAL PROTECTION
Between 2006 and 2010, Tibet earmarked a total of 10.1 billion yuan to preserve the plateau ecology and environment, three times as much as in the 2001-2005 period.
Tibet established eight new nature reserves to preserve its wetlands, natural forests and pasturelands and contain desertification and soil erosion.

137.8 BILLION YUAN ON KEY INFRASTRUCTURE PROJECTS
The central government earmarked 137.8 billion yuan for 188 key infrastructure construction projects in Tibet in the 2006-2010 period. By the end of last year, 109 of these projects had been completed and the other 79 were underway.
Among the most important projects were a new railway from Lhasa to Xigaze, Gunsa Airport in the northern Ngari Prefecture, Bangda Airport of Qamdo, and a 100,000-kilowatt photovoltaic plant in Ngari.

58,000 KM OF ROAD
By the end of 2010, Tibet had finished renovating 80 percent of its state highways and built blacktop roads to 54 counties, bringing the total road mileage to 58,000 kilometers.
Meanwhile, the ongoing construction of a highway to the isolated Metok county and Tibet's first ever expressway linking Lhasa and the Gongkar Airport will shorten travel time for the Tibetans.

3,990 YUAN IN PER CAPITA NET INCOME FOR FARMERS, HERDERS
The per capita net annual income of Tibetan farmers and herders reached 3,990 yuan in 2010, nearly twice the 2005 figure.
The increase was attributed to output growth in the farming and herding industries, as well as additional earnings from tourism and other service industries.

1.7 BILLION YUAN OF FREE MEDICARE
The central and regional government spent 1.7 billion yuan to finance free medical services for Tibetan farmers and herders in the 2006-2010 period.
Over the five years, the government renovated 20 Tibetan county hospitals and sent mobile hospitals to patrol 602 villages in 74 counties.

107,800 BUSINESSES
Tibet had 107,800 firms with a combined registered capital of 50 billion yuan at the end of 2010, up 9.3 percent and 15.7 percent respectively from the previous year.
Most business owners, drawn by the sound investment environment and rosy market prospects, are optimistic in trading Tibetan specific products and services.

7.57 BILLION YUAN OF AID
Over the past five years, Tibet received 7.57 billion yuan of aid from inland provinces and municipalities as well as government organizations, state firms and other institutions that are ready to help foster Tibet's development.
A total of 2,661 officials and professionals from the inland areas worked in Tibet for one to three years, bringing technological and management expertise.
Posted by Claude Arpi at 7:02 AM