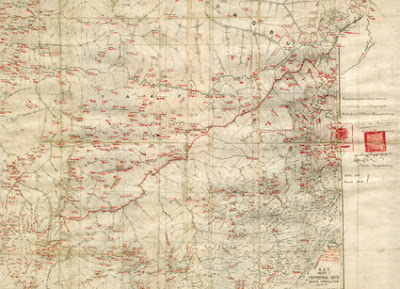 Facsimile of the McMahon Line delineating the border with China

This article in The Hindustan Times shows the lack of knowledge of the so-called 'experts' preparing assessment for the large dams in the Himalayas.
Often their knowledge about environment is about the same level as their cartographic knowledge.
Chinese must be laughing.
It is quite ominous for the North-East.
The map issue is an old one. During talks with Zhou Enlai, the Chinese Premier in June 1954, Nehru mentioned for the first time the fact that China government was grabbing its neighbour's territory on its maps. Nehru was very 'casual' about it.
Over the years, he realized the seriousness of the issue, but, by then, it was too late.
"Jawaharlal Nehru: As regards maps, I just casually mentioned to you some of the anxieties of our neighbours. We are not worried on this point. Our frontiers are clear but I mention it in the case of Burma because questions of this kind become a handle in the hands of enemy. Supposing we publish a map showing Tibet as a part of India, how would China feel about it? But as I said, I am sure, the maps were old maps and you did not mean it.
Answer from Zhou Enlai: Maps: It is a historical question and we have been mostly printing old maps. We have made no survey of the borders and not consulted with our neighbouring countries and we have no basis for fixing the boundary lines. We made our maps and revised them from the maps of other countries. At least we do not have any deliberate intentions of changing the boundaries as KMT had. The whole thing is ridiculous. The question of boundaries between China and Burma was not settled even in Manchu regime and you will find differences even in our boundaries with the Soviet Union and Mongolia. We can further discuss the matter with U Nu but we want time for preparation. (Selected Works of Jawaharlal Nehru, Volume 26)."
In other words, the Chinese first grabs territory and then prepare themselves to discuss the issue.
But more unbelievable, four years later, nothing had been done about it by the Indian side .
In a note sent on 8 April 1958 to S. Dutt, the Foreign Secretary, Nehru was still shy about the Chinese map aggression.
He wrote: "I think that our High Commission in London should certainly take up this matter with the Chinese Embassy. We might also refer the matter here in Delhi to the Chinese Embassy and express our regret at such maps being issued on behalf of the Chinese Government.
On the whole, I am inclined to think that we need not at this stage ask our Embassy in Peking to take up this matter. Thus, our present approach will not be too formal and at the same time the Chinese Government will know what we feel about the issue of such maps.
I have a vague idea that one or two of the border issues are going to be discussed soon here with the Chinese representatives. When such a discussion takes place, we might draw their attention to the inaccuracy of their maps generally."
The result of 'not being too formal' is that more than 50 years later, China still publishes the same maps and more pathetically India 'experts', some Indian 'experts' use the Chinese maps.
For the more formal correspondence between India and China on the subject, see the White Paper I.

Arunachal in China on ministry site
Rahul Karmakar,
Hindustan Times
Guwahati, January 27, 2011
Google maps showing Arunachal Pradesh in China were used in an environment impact assessment (EIA) report an Indian PSU produced for a mega private sector dam.
The report - including the map - was hosted on the official website of the Union environment ministry and stayed there for more than a month until an NGO in Arunachal filed a police complaint on December 5. The ministry has not approved the project yet.
The blunder, allegedly in a hurry to clear a contentious 2,700-megawatt dam awarded to Jaypee Arunachal Power Limited (JAPL), surfaced around the time New Delhi and Beijing were at odds over Beijing issuing stapled visas to J&K residents and claiming Arunachal as its territory.
JAPL, a subsidiary of the Jaypee Group, last year entrusted the downstream impact assessment study for its Lower Siang Hydro Electric Project to Water and Power Consultant Services (Wapcos), a PSU under the Union water resources ministry.
The Wapcos report was put on the website to elicit public response, as is the practice.
"The environment ministry subsequently trashed the EIA, but New Delhi has to treat the Google map issue as more than a fiasco. It is treason of the highest order, besides being an insult to the people of our state," said Vijay Taram, spokesperson for the NGO Forum for Siang Dialogue (FSD) that filed the police complaint.
An environment ministry official, who did not want to be named, said such errors by consultants have become frequent and corrective measures are being taken.
"We have asked consultants to take accreditation from a government body," the official said.
The FSD has shot off letters to the President, Prime Minister and relevant Union ministries apart from local authorities seeking punitive action against those responsible.
Locals have also sought scrapping of the dam, which is expected to displace at least 5,000 tribals.
"We are looking into the pros and cons of the issue," said East Siang deputy commissioner Onit Panyang.
Posted by Claude Arpi at 5:59 AM