China and the Nalanda Tradition 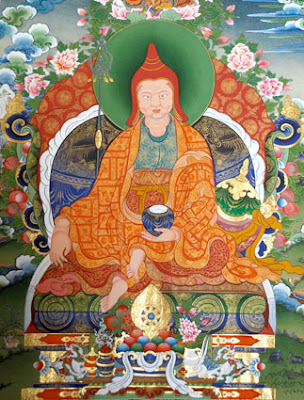 Something strange! As I mentioned in an earlier posting, the Nalanda tradition was never followed by the Chinese. Nalanda is mainly associated with China  because of the travelogue of the pilgrim Huanzang (596-664), who visited India in 629 (he came by the route through the Taklamakan desert).
His fame is due to the extraordinary record of his travels, as well as to Wu Cheng'en's novel Journey to the West, (published around 1570 during the the Ming Dynasty). The novel recounts the imaginary adventures of Huanzang and his companion, the monkey king Sun Wukong.
In Tibet, King Trisong Detsen invited Shantarakshita, the Abbot of Nalanda to teach the Buddha Dharma and ordain the first monks.
The Great Monk predicted that a dispute would arise between two schools of Buddhism, the Indian (Nalanda) and the Chinese. The issue was sorted out through the famous Samye Debate. After 2 years of intense discussion, the Indian path prevailed and a proclamation was issued by the King stating that the Indian Nalanda path was thereafter the orthodox faith of the Land of Snows.
So why should China give so much money for a tradition in which they never believed? Probably with some ulterior motives?

China announces donation for Nalanda University
ANI
2011-01-21
Chinese Ambassador to India, Zhang Yan has announced one billion US dollar aid for the reconstruction of Nalanda University.
Yan made the announcement after meeting Bihar Chief Minister Nitish Kumar here on Thursday.
"Nalanda University is under the reconstruction. Chinese government has donated one billion US dollars, to support the reconstruction of the Nalanda University," Yan told reporters.
"I will visit the University and discuss with the chancellor or vice-chancellor, how two sides can cooperate with each other to make this project very successful work," he added.
Yan encouraged cultural exchange between Bihar and China other than showing keen interest in the development of the state's agriculture and industry.
"Chinese side is very interested to develop co-operations with the state in many areas, especially in the agricultural industry as well as in infrastructure. Furthermore, we want to develop country exchanges with the state of Bihar," said Yan.
The Nalanda University Bill, 2010, will help begin a Central university in Nalanda district, on the lines of the ancient university, which was founded during the 5th century A.D and became a centre of learning for students from across South and East Asia.
Singapore, China, India, Japan, had announced a proposed plan to restore and revive the ancient University as Nalanda International University in 2006. (ANI)
Posted by Claude Arpi at 5:55 AM

This isn't about using anyone or being used. This work or plan on reconstruction is very important for Indo-China political relation too. As india is multi-cultural,secular and multi-religious state,India, and the world will benefit it. In fact, for all the Buddhist around the world. China is doing a good n benefittable work to India for the first time in history