Which direction for China in 2011? 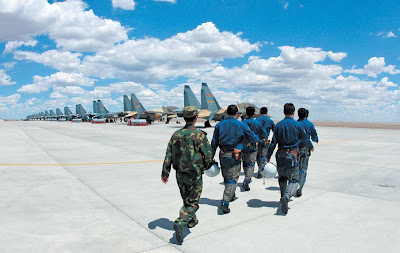 The China Defence Blog told its readers: “Contrary to the naysayers, the theory of ‘It-is-just-a-full-scale-wooden-mock-up’ is now ruled out.”
A Japanese expert told the AFP: “China plans to begin test flights of the J-20 as soon as this month, with plans to deploy the jet as early as 2017. …The fighter will be equipped with large missiles and could reach Guam [US base] with aerial refuelling, although it would take 10 to 15 more years to develop technology on par with that of the US F-22 stealth jet.”
Around the same time The PLA Daily published an article suggesting that China should focus on its national security strategic chain, composed of strategic resources, strategic industries, and strategic capabilities: “Our military capability is the backbone of our national strategic capabilities… It is critical to have our military capability reflect our national strategic status and interests." A veiled threat was added: “International cooperation is the best way to obtain a supply of stable strategic resources, but we should never give up the option of using abnormal means to safeguard the security of our strategic resources.”
Strategists can start scratching their heads: what abnormal means?
On Christmas Eve, The International Herald Leader reported a discussion at The Institute of Asia-Pacific Studies of the Chinese Academy of Social Science on the future direction of China's Foreign Policy.
The report, Evaluation of China's Security Situation explained: “In 2010, China faced intensified security pressure from its neighboring countries and deteriorating relationships with its neighbors.”
Whether the ‘intensified security pressure’ is of its own making has obviously not been discussed, but the mere fact that the issue was debated on by several government think tanks proves that there is no unanimity in China: should the nation continue with its aggressive foreign policy or return to a more peaceful rise of China.
The forum of the The Institute of Asia-Pacific Studies talked about the issue and apparently two opposing views emerged:
One can only hope that the first opinion will prevail amongst Chinese decision makers in 2011. If Beijing wants to pretend having a role in world politics, it is certainly in its interest.
Posted by Claude Arpi at 5:31 AM

Email ThisBlogThis!Share to TwitterShare to FacebookShare to Pinterest
Labels: China 2011