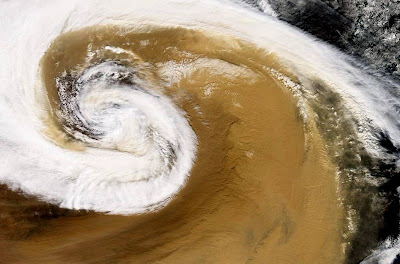 Some twenty-five years ago, I remember reading an article about 'Tibet, global cold center'.
At that time, global warming and climate change were not yet in fashion .
The scientific theory expounded in the article was that Tibet, being covered by glaciers and seasonal snows was like a mirror reflecting the light and the heat (thereby keeping the cold). Though, the term 'third pole' is today preferred, 'global cold center' was a good image.
At that time, the scientific predictions were that with the melting of the glaciers, there will be less white patches reflecting the heat, increasing its absorption by the earth. The process would accelerate and bring about global changes. The scientists predicted an exponential movement.
The new phenomena described below is even more worrying: the more dust, the less heat reflected, the warmer will become the region (and the planet), with all the consequences known today. 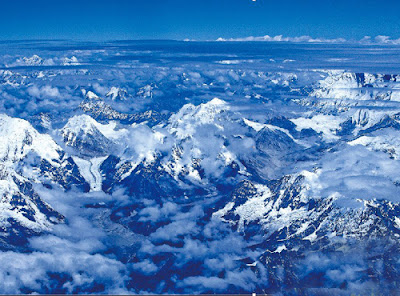 Is Global Warming Making Tibet Dustier?
by Eli Kintisch
5 January 2011
Global warming may be increasing winds that blow dust onto the Tibetan Plateau, and the sunlight-absorbing dust may be accelerating the melting of glaciers there.
SAN FRANCISCO, CALIFORNIA—Sediments taken from the bottom of a lake on the Tibetan Plateau suggest that changes in wind patterns caused by global warming may be making the area dustier. That trend could accelerate the melting of crucial glaciers in the Himalayas and affect already imperiled water supplies.
Jessica Conroy, a graduate student in paleoclimatology at the University of Arizona in Tucson, and colleagues collected sediment cores from the bottom of Kiang Lake in southwestern Tibet using equipment suspended from rafts. The cores track the history of climate in the region back to 1050 C.E. According to Conroy, who presented the data here at the fall meeting of the American Geophysical Union on 15 December, the amount of fine-grained dust in the lake sediment increased over the 20th century. Finer dust arrives from distant desert regions hundreds of kilometers away, suggesting stronger winds with the power to deliver the material.
Scientists have previously noted the rise of dust in the region but attributed it to the increase in agriculture, grazing, and other relatively local developments. Data Conroy presented showed that dusty periods coincide with summers when a Northern Hemisphere atmospheric phenomenon called the Arctic Oscillation is in a "positive phase." A positive phase of this pattern in the summer leads to stronger winds in desert areas to the north of the lake as well as south of the Himalayas.
Global warming seems to be keeping the Arctic Oscillation in its positive phase more often, which Conroy says could mean that climate, not just changes in the local landscape caused by human activity, could be making southwestern Tibet dustier. Lonnie Thompson, a paleoclimatologist at Ohio State University in Columbus, who did the earlier work noting the rise of dust, says he was "impressed" with the data and called the work "thoughtful." The findings mirrored patterns he had documented within ice in a Himalayan glacier called Dasuopu, "particularly the increase in the past century or so of dust," he says. Conroy's hypothesized link between dust levels and the Arctic Oscillation "probably warrants more investigation," Thompson says.
"It's going to continue to be dusty in this region, and dust can accelerate the melting of the glaciers in the Himalayas," says Conroy. That's because the dust lands on the white ice and makes it darker, absorbing radiation and accelerating melting in the Himalayas. These glaciers, which provide water for hundreds of millions of people across Asia, are in serious danger—although a well-documented typographic error in the 2007 IPCC report exaggerated the rate of their disappearance. Dust also warms the air above the Tibetan Plateau, enhancing monsoon circulation patterns, which could affect rain and alter rainfall patterns across the southern Asia.
Posted by Claude Arpi at 7:19 AM