More on the Metok road 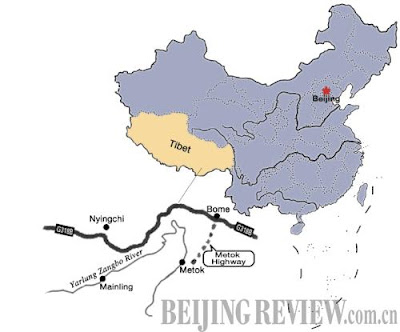 Two more Chinese articles about the road to Metok (Mutuo).
Though the articles do not mention the proximity of the Indian border, they admit that it is a natural 'paradise': "Metok State Nature Reserve, located in canyons at an average altitude of 750-4,800 meters, is home to numerous waterfalls and rivers as well as rich flora from tropical to cold-weather plants. As one 10th of China's plant species can be found in Metok, it has been dubbed the 'Natural Museum of Tibet' or 'Tibetan Botanical Garden'. Plants from both frigid and subtropical zones are compatible and coexist on this small isolated island."
But what will happen to the 'paradise' when lakhs of tourists and PLA's soldiers will pour into the county?
The Chinese press forgets to mention that this area is the one of the most seismic zones of the planet and the epicenter of the 'earthquake of the century' (on August 15, 1950). It measured more than 8.6 on the Richter scale.

Lost Paradise Connected
2011-Jan-5
Construction workers successfully blasted through the last section of mountain leading to Metok County, Tibet, on December 15. The explosion ended an era of isolation for the region.
The 3,310-meter-long Galongla Tunnel, built at an altitude of 3,750 meters, is a crucial part of the Metok Highway, said Weng Mengyong, Vice Minister of Transport. The "extremely complex" geological and meteorological conditions made highway construction work arduous and difficult, said Weng.

Shorter and safer
Metok with a population of 11, 000 is China's last county with no highway link. Bad weather, like snow and rain, make the narrow paths to the county impassable for nine months of the year, and it takes more than 10 hours to get out of the mountains on foot.
The Galongla Tunnel is the key sector of the project. Once completed, it will cut 24 km from the original rugged mountain road. The 117-km highway, linking Metok and Bome counties, will shorten the travel time by half an hour.
"It was a life-threatening adventure every time I climbed through the mountains of Metok," said Zhou Haitao, a government official who worked in Metok for five years. Zhou made a rough calculation that he had walked more than 2,000 km around the county during his service.
The future highway will no doubt benefit the transportation of the local people. "I can finally join my family during Spring Festival holidays," said Fang Hong, a Metok-born member of the Menba ethnic group who works in another nearby county.
Fang said his family would be so worried about his safety that they always suggested Fang not return home during Spring Festival for fear of avalanches when traveling alongside the risky mountain paths. With the tunnel and the new highway, Fang said he and his family will no longer worry.
But Fang still has a year to wait before the route is completed as a 90-km section of the highway, from the tunnel to the Metok County seat, has yet to be built. 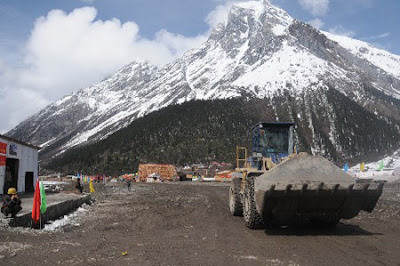 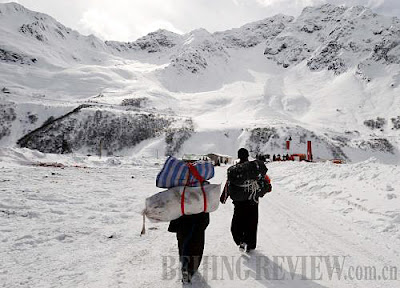 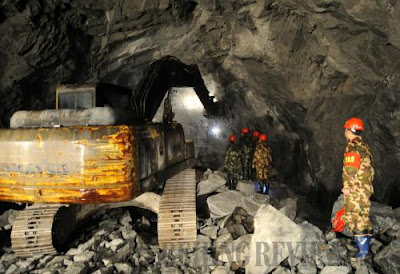 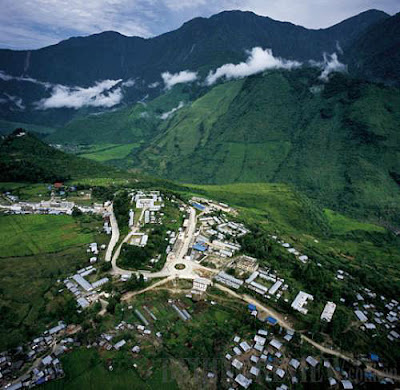 The tough job
Metok County, in Nyingchi Prefecture of the Tibet Autonomous Region, has the nickname "plateau island."
The 3,400-square-km county enjoys vertical climatic phenomenon with an environment that changes from icy mountain slopes to tropical rainforests, which brings a basic agriculture economy to the region. But poor transportation conditions make it difficult to get agricultural products out of the county.
The most common way of commercial transportation in Metok is through labor carriers. As the lifeline of the local people, a special transportation team has carried thousands of tons of living and production materials in and out of the county in the past few decades. These people trek through the snowcaps, canyons and landslides to transport corn, medicine, concrete, steel, and other daily necessities to Metok, contributing significantly to the life of the people in China's most remote county.
Poor infrastructure has hindered economic development in Tibet in the past, said Padma Choling, Chairman of Tibet Autonomous Region. The central and local Tibetan governments have been sparing no effort to build a highway network of 58,000 km, which has boosted economic development and enhanced social stability in the region, he said.
The Metok-Bome Highway project was approved by the State Council in October 2008 with an investment of 950 million yuan ($ 144 million) totally from the Central Government. The project includes 29 bridges and 227 culverts and was expected to take 36 months to complete.
Tibet tried to build modern roads to link Metok and other parts of the region as early as 1965. In the following decades the effort to build roads to link the county never ceased, but the best results were fragments of simply constructed paths, which only allowed hikers and horse caravans.
Seven years before the country finally settled on the project to build the modern highway to Metok, prospecting teams were dispatched to survey geological conditions of the area where the highway was going to be laid.
"We'd spent six years investigating the area to collect information about geological disasters and possible hazards," said He Xianzhi, a member of the team.
He said in the beginning there were eight routes planned for building the highway. In the end, they chose the current route from a shortlist of three plans.
According to the Tibetan Buddhist scripture Kanjur, "Metok," or "hidden lotus" in Tibetan, is Tibet's purest and holiest region. Most of the locals, mainly of the Menba minority, are descendants of people who migrated from other places in Tibet more than 100 years ago.
Metok State Nature Reserve, located in canyons at an average altitude of 750-4,800 meters, is home to numerous waterfalls and rivers as well as rich flora from tropical to cold-weather plants. As one 10th of China's plant species can be found in Metok, it has been dubbed the "Natural Museum of Tibet" or "Tibetan Botanical Garden." Plants from both frigid and subtropical zones are compatible and coexist on this small isolated "island."
Metok is also a significant symbolic destination for travelers and adventurers. The inaccessibility makes it one of the most untouched places in the world. The charm of an expedition to Metok lies in the very challenge of reaching this amazing place on foot.

GDP of Tibet's Medog County tops 113 mln yuan in 2009
Xinhua
2010-Feb-15 Mon
The gross domestic product (GDP) of Medog County, southeastern Tibet, the last county in China inaccessible to roads, surged 31 percent year on year, according to a work conference of the county for 2010.
The county's GDP -- the value of goods and services produced -- topped 113 million yuan (16.55 million U.S. dollars) in 2009.
Medog had spent 37 percent of its total investment, i.e., 413 million yuan, on 50 construction projects in 2009. The average annual income of its farmers and herders reached 2,985 yuan last year, up 13.8 percent over 2008.
In 2009, the County gave priorities to its residents' livelihood, infrastructure construction, and agriculture and animal husbandry with local characteristics, according to Tibet Daily.
Medog finished construction of some key projects in 2009, such as the Dexing Bridge, Zhamo Highway and Yadong Power Plant.
It also tried to speed up construction of its countryside by building tap water supply facilities, roads and affordable houses for farmers and herders.
Its countryside has also been supplied with telephone, TV and postal services and 99 percent of its residents are now covered by rural cooperative medical care.
Posted by Claude Arpi at 7:54 AM