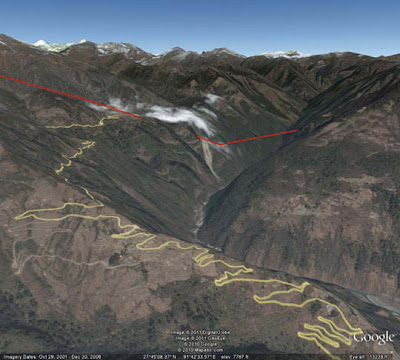 One can only agree with Shyam Saran, the former Foreign Secretary when he says: "Evidence made available recently indicates that Mao, having reoccupied the front line of the leadership after having been weakened by the failure of the Great Leap Forward (1959-61), himself took the key decision, towards the end of August 1962, to launch a full-scale offensive against Indian border forces."
Several years ago, I had written an article for Rediff.com pointed to the same angle. I wrote: "Even if the Indian Government jealously keeps secret its own findings of the 1962 war with China, several authors, mostly retired generals and journalists, have covered the military sides of the conflict. Amongst them, Brigadier John Dalvi's Himalayan Blunder shines as a great classic, written by a soldier who paid for the foolishness and arrogance of the few in power at that time. However, as we mentioned in a previous article, several aspects in the conflict have never been researched properly, mainly due to the absence of archival documents and written memories.One of these angles is the internal struggles within China between 1959 and 1962 and the role of Mao Zedong during these crucial years. A study of the Russian and East European archives, already partially opened, throws new light on the real motivation for the Chinese attack."
While Neville Maxwell and his Indian disciples are still hanging on to the theory that Nehru's Forward Policy was the cause for the war, it is today crucial for Indian historians to look at the other side of the Great Wall.

I am posting here an extract of The Origins of the Cultural Revolution by Roderick MacFarquhar (Volume III, Mao changes the signals). The slap to Nehru in October 1962 strengthened Mao's newly-recovered status in the Party. He had severely criticized the 'Three Ni's and the One Tie' that is, Kennedy (Ken-ni-di), Nikita Khrushchev (Ni-ji-ta He-lu-xiaa-fu), Nehru (Ni-he-lu), and Tito (Tie-tua).
Here is MacFarquhar about the timing of Mao's counter-attack (August-September 1962): "It is not difficult to understand why Mao launched this sudden [internal] counter-attack [during the 10th Plenum in September 1962]. He was faced with what he saw as fundamental and unacceptable changes in key areas of policy: a rolling back of collectivization in the countryside which would have undermined his whole vision for a socially transformed China; and a détente with the Soviet Union, which could have undermined his search for a distinctive Chinese road. In his eyes, this was 'peaceful evolution' towards capitalism. Moreover, the changes were reversals of his own past policies: rapid collectivization followed by rapid communization, and the frontal attack on Soviet revisionism. At the outset of the Cultural Revolution, in his famous polemic 'Bombard the Headquarters', he would describe what happened in 1962 as a 'rightist deviation'. The rehabilitation of Peng Dehuai would have been the final straw, constituting a devastating admission of error during the GLF [Great Leap Forward] far greater than Mao's acceptance of responsibility at the Seven Thousand Cadres Conference. It could not be tolerated.Mao had ample motives for confronting his colleagues and reasserting his dominance, but there remains the question of timing. How was it that at the end of January he felt obliged to make what his colleagues clearly felt was an extraordinary self-criticism, freeing them to explore radical policy options, whereas by early August he could launch an unapologetic counter-attack that had them scurrying for Cover? What had happened to give Mao this surge of confidence?
The decisive factor was probably the size of the summer harvest, which tended to be a reliable indicator of the size of the larger autumn harvest and thus of annual output. When touring the Country after the Seven Thousand Cadres Conference, Mao was apparently being told on all sides that 1961 had been better than 1960 and that 1962 was better than 1961. On 11 May, Zhou Enlai informed his colleagues that 'except for a few regions, agriculture production in most parts of the country has stopped declining and taken an upward turn'. In Jinan in June, Mao was given this appraisal by Shandong officials on the basis of the recent wheat harvest. By the time he got to Beidaihe, he should have been able to buttress this anecdotal evidence with statistical data. Though no announcement was made about the summer harvest in 1962, we know that the data for computing its size should have been available at least by the end of the third week in July, for in 1958 the Ministry of Agriculture issued the summer harvest figures on 22 July, and they had been made available to Chinese leaders by mid-June. In his first Beidaihe speech on 6 August 1962, Mao revealed that he had seen an assessment of the industrial achievements for the first half of the year, and it seems likely that this was part of an overall statistical brief. Since the first estimates of the autumn harvest were normally made in August, Mao may have seen them too."
The counter-attack on the external front (against India) was the other side of the one on the internal front (against revisionism and Soviet Union).
A lot of more research has to be done in this field.
One thing is sure, the 1962 conflict has traumatized the Indian psyche in a deeper way than the Chinese for whom it was only a passing  episode in their history of 'class struggle'..

Neighbours only since 1950
The Indian Express
by Shyam Saran
12 January, 2011
Neville Maxwell, author of India’s China War, resurfaced recently with an article spelling out the ABCs of the Sino-Indian confrontation (‘The Night of November 19’, IE, December 27, 2010). Once again, he put the blame squarely on Jawaharlal Nehru’s “Forward Policy” for the armed clashes in 1962, which led to India’s painful humiliation and to Nehru’s domestic and international stature being irretrievably eroded.
There is no doubt that there was a serious misreading on the Indian side of Chinese intentions, in particular a failure to relate the events on the border to domestic political developments in China and the larger international situation. Evidence made available recently indicates that Mao, having reoccupied the front line of the leadership after having been weakened by the failure of the Great Leap Forward (1959-61), himself took the key decision, towards the end of August 1962, to launch a full-scale offensive against Indian border forces. The preoccupation of the US and the then-Soviet Union with the Cuban Missile Crisis may have also emboldened the Chinese leadership to target India, taking advantage of this window of opportunity.
A directive sent to the Chinese units on October 6 on behalf of Chairman Mao and the Central Military Commission stated: “If the Indian army attacks, hit back ruthlessly... if they attack, don’t just repulse them, hit back ruthlessly so that it hurts.” Later, another directive ordered Chinese units to “liquidate the invading Indian army” (Roderick MacFarquhar in The Origins of the Cultural Revolution, 1997). Indian operations carried out till then were mostly in the nature of limited-scale probes and skirmishes with the Chinese border units. The Indian army had neither the troops nor the logistic capabilities to launch full-scale attacks, let alone an invasion. The Chinese were fully aware of this.
This background is important since it is also the judgment of several analysts that if Mao had not reasserted his leadership role at this time, there may not have been the kind of large-scale offensive that eventually took place.
It is clear from the above directives that there was to be no “measured” or “proportionate” response, as claimed by Maxwell, but rather a deliberate and calculated offensive to defeat and decimate Indian military units comprehensively. The ob-jectives went beyond the border issue and included retaliating against India for giving shelter to the Dalai Lama and demolishing India’s standing and reputation in the Third World.
Maxwell says that China had no alternative but to “get its retaliation in first” once Nehru had somewhat casually declared his intention to throw out the Chinese from areas claimed by India. It is clear from the phrase itself that the Chinese ob-jective was a pre-emptive offensive rather than a counter-attack in response to any actual Indian operations, and Nehru’s ill-advised remarks provided a convenient peg to hang this on. The Indian failure was in continuing to believe that the earlier pattern of limited border skirmishes would continue and that they would not escalate into full-scale armed clashes. This failure should be acknowledged in all honesty and the country should never again have to face a situation of such total disconnect between its diplomatic posture and its military capabilities.
However, the focus on the immediate causes of the 1962 armed clashes should not obscure the larger issue of Sino-Indian boundary. There is also an ABC of the border issue that needs to be kept in plain sight as we struggle to evolve a strategy to manage India-China relations in a rapidly transforming international landscape.
A: India’s humiliation in 1962 does not diminish in any way the strength of India’s case concerning the India-China border. Nehru’s mistakes in handling the border dispute does not in any way negate the massive legal and historical evidence adduced by India in support of its claims. This can be readily accessed in the series of White Papers published by the Government of India on the subject. G.N. Rao’s The India-China Border: A Reappraisal also provides an excellent analysis.
B: Chinese claims in the western sector have no historical or legal basis. China’s traditional boundary, shown on its own maps, never extended south of the Kuenlun mountains. Aksai Chin never belonged to China. The eastern boundary between Ladakh and Western Tibet had also been fixed by treaty as far back as 1642.
C: There were no significant differences between India and Tibet concerning their traditional boundary and the McMahon Line only formalised what was already well known and recognised by people on both sides of the border. It is China’s unilateral and armed occupation of Tibet in 1950, which created, for the first time, a border between India and China. Incidentally, until 1985, the Chinese “package proposal” put forward by Chinese leader Deng Xiaoping in 1982, would have legitimised the status quo — that is, India to accept Chinese occupation in the western sector, while China would acquiesce to the Indian alignment in the eastern sector, conforming to the McMahon Line, but without the offending label. It is only in 1985 that the Chinese side reinterpreted the “package proposal” to insist that the Indian side would have to make concessions in the east while the Chinese side could reciprocate with some unspecified corresponding concessions in the western sector.
In aiming for a just and reasonable border settlement with China, India will have to take into account current ground realities. A spirit of mutual understanding and some give-and-take on respective territorial claims is unavoidable. However, it is equally necessary for us to exorcise the ghosts of 1962 and dispel the scepticism that appears to have invaded our own perceptions about the strength of our claims on the border.
The writer is a former foreign secretary and now acting chairman, RIS, and senior fellow, Centre for Policy Research, Delhi express@expressindia.com
Posted by Claude Arpi at 9:28 AM