What a bunch of crap!! 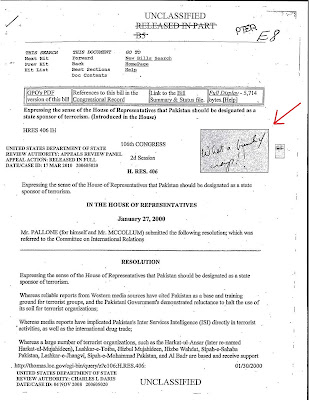 On January 27, 2000, Congressman Frank Pallone introduced Resolution 406 in the House of Representatives, "expressing the sense of the House of Representatives that Pakistan should be designated as a state sponsor of terrorism."
The Department of State released the document with a box obliterating something on the top right of the page.
Barbara Elias, the Director of the National Security Archive’s Afghanistan/Pakistan/Taliban Documentation Project filed an appeal with the Department of State’s Appeals Review Panel to know what the US diplomacy had to hide.
What was in the text/comment in the box?
Two years later, Elias finally won her appeal and to her surprise, she found a few words written: “What a bunch of crap!!”
The blog of the National Security Archives commented: "I had a hearty chuckle, finding it quite funny that 1) a person employed by the Department of State (I don’t know who– are there any graphologists out there?) would write “bunch of crap!!” on a copy of a House resolution, and 2) that the Department of State had tried so hard to prevent the public from knowing it had ever happened."
Well, it is telling of the US State Department's attitude towards Pakistan and terrorism.
Is it different after September 2001? Not sure.


106TH CONGRESS 2D SESSION
H. RES. 406
Expressing the sense of the House of Representatives that Pakistan should be designated as a state sponsor of terrorism.

IN THE HOUSE OF REPRESENTATIVES
JANUARY 27, 2000 Mr. PALLONE (for himself and Mr. MCCOLLUM) submitted the following resolution; which was referred to the Committee on International Relations

RESOLUTION
Expressing the sense of the House of Representatives that Pakistan should be designated as a state sponsor of terrorism.
Whereas reliable reports from Western media sources have cited Pakistan as a base and training ground for terrorist groups, and the Pakistani Government’s demonstrated reluctance to halt the use of its soil for terrorist organizations;
Whereas media reports have implicated Pakistan’s Inter Services Intelligence (ISI) directly in terrorist activities, as well as the international drug trade;
Whereas a large number of terrorist organizations, such as the Harkat-ul-Ansar (later re-named Harkat-ul-Mujahideen), Lashkar-e-Toiba, Hizbul Mujahideen, Hizbe Wahdat, Sipah-e-Sahaba Pakistan, Lashkar-e-Jhangvi, Sipah-e-Mohammad Pakistan, and Al Badr are based and receive support from Pakistan;
Whereas the Harkat-ul-Ansar, a terrorist organization based in Pakistan, was declared a foreign terrorist organization by the U.S. Department of State in 1997;
Whereas the hijackers of the Indian Airlines plane in December 1999 were identified as being part of the Harakatul-Mujahideen, and among the hijackers’ demands were the release of the organization’s former General Secretary, Masood Azhar, who hails from Pakistan, and other jailed Pakistani militants;
Whereas during the December 1999 hijacking incident, it was reported that Indian intelligence intercepted satellite telephone conversations between militant groups in Kashmir that confirmed Pakistan had links to the hijackers;
Whereas it has been reported that, after the resolution of the crisis, the hijackers left Afghanistan for Pakistan;
Whereas this organization is linked to the militant movement waging a campaign of terror and violence against both military and civilian targets in an effort to end Indian governance of Kashmir;
Whereas this organization has been reported to be behind the kidnapping of four Western tourists in Kashmir, two of whom were murdered and two others, including an American, still remain missing;
Whereas the Lasjkar-e-Toiba, a terrorist organization based in Pakistan, is currently reviewed by the U.S. Department of State as a foreign terrorist organization;
Whereas Pakistan is one of three countries to recognize the Taliban in Afghanistan;
Whereas the Taliban, which has been declared a foreign terrorist organization by the U.S. Department of State, has provided refuge and assistance to Osama Bin Laden;
Whereas the U.S. Department of State has declared Osama Bin Laden and associates as a foreign terrorist organization;
Whereas Pakistan has hindered U.S. and international efforts to apprehend Osama Bin Laden;
Whereas Pakistan was placed on the U.S. Department of State’s ‘‘watch list’’ of suspected state sponsors of inter-national terrorism in 1993;
Whereas in November 1979, according to the U.S. Department of State, the Government of Pakistan allowed for the U.S. Embassy and the American Cultural Center in Pakistan to be destroyed by fire, which led to the death of two Americans;
Whereas the perpetrators of the terrorist attacks at the World Trade Center in New York and at the Central Intelligence Agency headquarters in Langley, Virginia, who were Pakistani nationals, were found in Pakistan;
Whereas three Pakistani nationals, who were closely linked to Osama Bin Laden, were arrested in 1995 in Manila, Philippines, in connection with an alleged plot to kill Pope Paul II;
Whereas Americans and other Westerners have been the victims of attacks in Pakistan, including a November 12, 1999, rocket attack on the United States Embassy in the Pakistani capital of Islamabad, and a March 8, 1995, attack in Karachi, Pakistan, in which two United States diplomats were killed and a third wounded;
Whereas Pakistan has acknowledged its ‘‘political and moral’’ support of the separatist movement in Kashmir; Whereas, pursuant to the Export Administration Act of 1979, the Secretary of State of the United States designates the governments of certain nations as having repeatedly provided support for acts of international terrorism; and Whereas Members of Congress have called on the President and the Secretary of State to place Pakistan on Watch List of nations which support terrorism: Now, therefore, be it
Resolved by the House of Representatives, That—


(1)    the Secretary of State, pursuant to the Export Administration Act should designate the Islamic Republic of Pakistan as a country, the government of which has repeatedly provided support for international terrorism; and
(2)    in addition to terrorist organizations themselves, those countries that harbor terrorist organizations or provide them with technical, financial, political or other support should also be held accountable; and
(3)    that, given the shared threat that the United States and other countries face from international terrorist organizations, the State Department is urged to explore ways to keep up U.S. co-operation with those countries in the struggle against terrorism