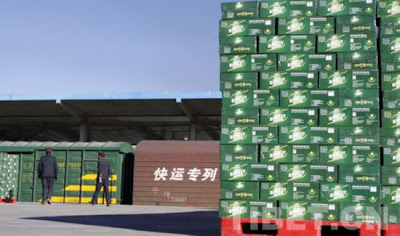 Is it a good news?
Tibet has started exporting chang (barley beer) to  China.
The transport is probably subsidized. The article speaks of the cooperation between the TAR and the Ministry of Railways.


Barley beer on its way to inland market
December 30, 2010eng.tibet.cn.
On Dec.27, a train loaded with Tibet Barley Beer pulled out from the Freight Yard in Lhasa West Station, which marked the entry of Tibet Barley Beer into the inland market.
As one of the key projects by TAR, the Tibet Barley Beer is enabled with an annual output of 200,000 tons of beer by consuming 80,000 tons of barley, which equals to 1/6 of the total yield of Tibet Autonomous Region with an investment of over 500 million yuan and equipment from Germany.
The Tibet Barley Beer will be shipped to consumers of inland cities through the Qinghai-Tibet Railway.
In 2007, the cooperation between TAR and the Ministry of Railways has successfully promoted the 5100 mineral water of Tibet all over the national market, which also provides a prosperous model for the marketing of the Tibet Barley Beer.

Tibet Barley Beer will be sold to the inland market from Lhasa
Posted by Claude Arpi at 7:38 AM