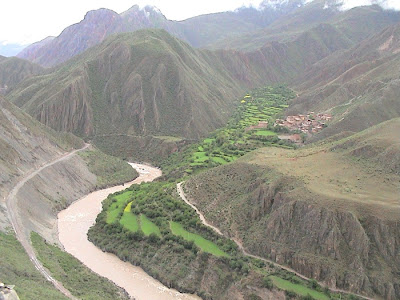 China Tibet Online announces the official sanction of 25 new 'terraced' hydropower stations on the Upper Yangtze (Drichu in Tibetan) and other rivers of Eastern Tibet. It is not clear to me what a 'terraced' hydropower station is. It seems a new term.
A friend tells me that it is probably "a cascade of hydropower stations, like the terraced rice fields where water flows from upstream to downstream fields."
This announcement confirms a recent report from Reuters which affirmed: "China has approved several new hydropower projects recently, in a sign that the government is speeding up development of clean energy after an approvals slowdown in recent years because of concerns including environmental impact.
The National Development and Reform Commission (NDRC) said in reports on its website (www.ndrc.gov.cn) that it had approved the construction of the 2.6-gigwatt (GW) Changheba hydropower project in Sichuan province this month. The commission said it had also approved the 2.4-GW Guan'di hydropower station and the 600-megawatt Tongzilin hydropower project, both in Sichuan, in September. ...Approvals for big hydropower projects had almost come to a halt in recent years amid complaints about the environmental impact and economic viability of large dams, as well as the treatment of migrants displaced during the impoundment of reservoirs."
Whether this is 'clean energy' is another issue. 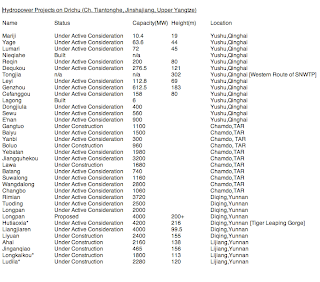 Chamdo to build 25 terraced hydropower stations
Amanda Wu
China Tibet Online
2011-01-19
Eastern Tibet's Chamdo Prefecture plans to build 25 terraced hydropower stations in accordance with the water-resource development plan along the Drichu River, Dachu River and Ngulchu River, said Urgyen Phuntsog, vice secretary of the Chamdo Party Committee.
So far, Chamdo has completed the preliminary surveys on seven terraced hydropower stations, and the feasibility studies on the Yerpa Beach, Lawa and Suwalong terraced hydropower stations have been in full swing.
In Chamdo, the total water reserve amounts to 40.46 million kw while the overall hydropower generated in Chamdo was 280,000 kw as of the end of 2010.
Chamdo will build several major power plants along the three rivers in the 12th Five-Year Plan period (2011-2015), with its installed capability estimated to over 5 million kw by 2015.
By 2020, Chamdo's installed capability is expected to exceed 10 million kw and then it will basically set up a national energy base to transmit electricity from the western to the eastern regions.
Posted by Claude Arpi at 7:50 AM

Email ThisBlogThis!Share to TwitterShare to FacebookShare to Pinterest
Labels: Dams