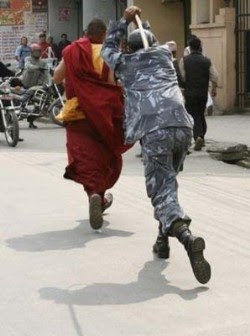 The Wikileaks document mentioned in the IANS article is not yet available on the Net, but it confirms our precedent posting about the influence of China in Nepal.
In fact, one can clearly see the progression.
In October 2010, I wrote: "Another worrying piece of news is the fact that Nepal is quickly becoming a Chinese colony. A Nepali newspaper reported last week: 'Nepal government has lately vowed to check ‘anti-China activities’ to strengthen friendly ties with China, a major donor for the impoverished country'.
When the Tibetan diaspora recently voted for their Kalon Tripa (prime minister-in-exile), it was an ‘anti-China activity’. While the elections were held smoothly everywhere else in the world, Kathmandu decided to confiscate the ballot boxes. The Ministry of Home Affairs of Nepal issued a statement that the internal vote of the Tibetans was 'against Nepal’s foreign policy which regards Tibet as an integral part of China'.
The Kathmandu police chief explained that the action was taken to prevent an ‘illegal vote’. He told AFP: 'The Tibetans are living in exile in Nepal. It is illegal for them to carry out elections here.'
Many observers see a connection between the Nepal government’s reaction and the visit a few weeks earlier of a Chinese high-level delegation led by He Yong, Secretary of the 17th Central Committee of the Communist Party of China. He is reported to have shown his satisfaction over 'Nepal’s ‘one China’ policy and the alertness adopted by the country over the Tibet issue'.
Earlier, the Chinese and Nepal governments had agreed to set up a joint mechanism to share intelligence on ‘anti-China activities’ in Nepal.
All this does not augur well for India which has a tendency to think and act at elephant’s pace, while Beijing is moving its cards more and more swiftly."
From the time of the cable (2005) till now, one can see the tremendous speed with which Beijing has moved its pawns to take over the Himalayan kingdom.
Tibetan refugees are today second class citizens.
Where is India in the picture? 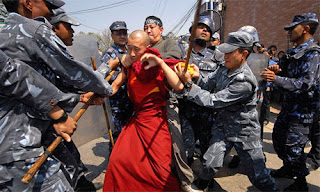 Nepal's king traded Tibetan refugees for US support: WikiLeaks
15 Jan, 2011
IANS
KATHMANDU: After ordering the closure of the Dalai Lama's envoy's office in Kathmandu and taking over absolute power with a military-backed bloodless coup in 2005, Nepal's King Gyanendra dangled Tibetan refugees as bait before the US in a bid to get American support, whistle-blowing web site WikiLeaks said in its latest revelation.
Ramesh Nath Pandey, the man appointed foreign minister by the king, met the then American ambassador to Nepal, James Moriarty, saying the royal regime wanted a long-term relationship with the US and would respond better to "engagement" rather than pressure.
The American ambassador emphasised that the Congress was considerably concerned about the Tibetan refugees escaping to Nepal from China-held Tibet and urged the royal minister to ensure the refugees' transit was proceeded without hindrance.
At time, there were about 1,000 Tibetan refugees at the Tibetan Refugee Reception Center, that facilitates the forward journey of the refugees to India and other countries, and the envoy said Nepal needed to make sure that the process of transiting refugees to India resumed.
The US had earlier proposed it would resettle the Tibetan refugees in Nepal in American cities but the proposal remains stuck officially after Nepal declined, due to Chinese pressure.
The ambassador also pushed for an NGO, the Tibetan Welfare Society , to be given registration. The society, believed to be a new form for the office of the Dalai Lama's representative in Nepal, was shut down in January 2005. The leaked cables said the Nepal minister's response was ambiguous.
He first said Nepal needed to have a close relationship with the US and then indicated that given the Chinese support, Nepal might not act on the issues raised by the ambassador unless Washington changed its Nepal policy.
The king's messenger reportedly said Nepal's long-term interest was in a relationship with the US, not China or India. He also claimed that though India and the US had stopped providing military assistance to Nepal after the coup, "Nepal would not be short of arms" and that "a plane of material from one of your best friends" would arrive.
The American ambassador advised the king, who was waging a war on the Maoists with little result, to declare a cease-fire with international monitoring and to reconcile with the political parties.
The royal minister countered that saying the party leaders were a major problem and the king should bypass them and ally with middle-tier leaders. He also said the Maoists would exploit the parties against the king and dump them when they had their way. The ambassador noted that Pandey's proposal meant "essentially... decapitating the parties and was unacceptable".
The ambassador also emphasised that Tibetan refugee issues were one of the administration's and Congress's key concerns regarding Nepal, and if there were no progress, Nepal could put at risk other parts of the relationship, including development assistance.
The new revelation comes even as the controversial memoir of a former military secretary to the palace claimed China wanted Nepal to deploy its army to prevent Tibetan refugees from escaping and proposed the army should be strengthened for that.
Posted by Claude Arpi at 7:54 AM