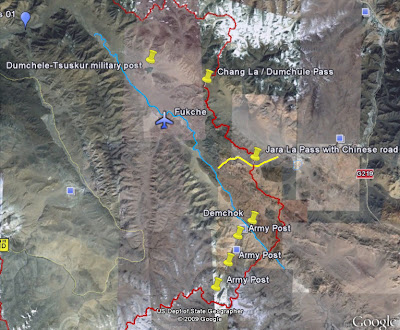 As reported several times on this blog, during the past months,the Chinese have been constructing mega infrastructure projects (roads, airports, five-star hotels) on their side of the LAC, north of Arunachal, Himachal and Ladakh.
For India, the most ominous one is the tunnel (and highway) to Metok, a few kilometers north of the McMahon Line.
While Delhi has never uttered a word of complain  or objection to these highly strategic developments, the Chinese not only continue to intrude into the Indian territory, but they also decide if the local population on the Indian side needs a shed or not.
As the result of Delhi's appeasement policy, 'permission' will have to be given by the Ministry of Defence (and cleared by Beijing, I presume) to build any structure withing 50 km inside the Indian territory.
This is double standard.