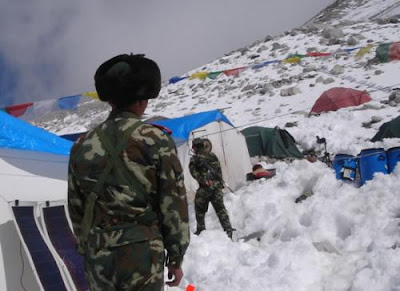 Over the years, the situation is becoming tougher for the Tibetan refugees in Nepal .
We knew that the Maoists had been dictated the terms and were responsible for the Nepali-Chini Bhai Bhai policy.
Two documents confirm this. The first one is a cable from the US Ambassador in India sent to the State Department on February 19, 2010 and the second one is a book: the memoirs of  Gen. Bibek Kumar Shah, a former military secretary of the royal palace.
China has enough foreign reserves to 'influence'  smaller nations like Nepal and they do not hesitate to be brutal when 'necessary' (see the video posted below).


Update on Tibetan Refugee Flow
XXXXXXXXXXXX told PolOff on February 4 that an average of 2,500 to 3,500 refugees from TIBET typically arrive in Dharamsala each year, with most returning to Tibet after receiving an audience with the Dalai Lama. XXXXXXXXXXXX confirmed that from 1980 to November 2009 87,096 refugees were processed by the Dharamsala Reception Center (RC) and that 46,620 returned to Tibet after a short pilgrimage in India. Most of those who do stay in India are children who then attend schools run by Tibetan Children’s Villages. XXXXXXXXXXXX and XXXXXXXXXXXX both highlighted to PolOff that, following the March 2008 uprising in Tibet, the number of Tibetan refugees markedly decreased, with only about 650 refugees arriving at the RC from April 2008 to March 2009. XXXXXXXXXXXX speculated that Beijing has asked Kathmandu to step up patrols of Nepali border forces and make it more difficult for Tibetans to enter Nepal. XXXXXXXXXXXX reiterated this belief to PolOff during a XXXXXXXXXXXX meeting in Delhi, stating “the Chinese government rewards (NEPALi forces)” by providing financial incentives to officers who hand over Tibetans attempting to exit China. XXXXXXXXXXXX was optimistic that flow of refugees will soon go back to normal levels because admission statistics for 2010 are surpassing those from an equivalent period in 2009. XXXXXXXXXXXX ROEMER

Palace aide's memoir bares China skeletons in Nepal cupboard
2011-01-12 15:00:00
IANS
Kathmandu, Jan 12 (IANS) The controversial memoir of a former top palace aide of Nepal, that has dragged India into dispute and besmirched the images of the former royals, also bares Chinese skeletons in Nepal's cupboard. It contends that Beijing sought to create bad blood between Nepal and India and pressured for the deployment of the army to curb the flight of Tibetan refugees.
Gen. Bibek Kumar Shah rose to be the military secretary of the royal palace from a former aide de camp of king Birendra.
His tenure saw the king as well as nine more royals die in a bloodbath in the palace. After Birendra's brother Gyanendra ascended the throne, Shah was asked to resign and was refused further audience with the king.
The disgraced general's recently released memoir, 'Maile dekheko durbar' - The court as I saw it - created controversy even before it was officially released. A section of Nepal's media highlighted his allegation that India had trained Nepal's Maoist guerrillas during the 10-year insurgency to demolish monarchy in Nepal.
The allegation was denied as baseless by both the Indian government and the Maoists, who are now the largest party in Nepal's parliament.
What has gone unremarked is the adverse image of Nepal's northern neighbour China that the memoir paints, willy-nilly.
Though he was frequently dined by the then Chinese ambassador to Nepal Wu Congyong and he exhibited a pro-China stance, Shah's 'diary' boomerangs on Beijing with its explosive entries.
Shah writes that during the growing Maoist insurgency in Nepal, Wu met the then Nepali prime minister Sher Bahadur Deuba, and was 'understood to have clarified that Nepal's Maoist Party (then a banned terrorist organisation) moved as per the Indian agenda and has no relation with China'.
According to Shah, the Chinese envoy also said the Maoists were deliberately misusing Chinese leader Mao Zedong's name to create a misconception about their links with China at the behest of India.
'According to the information given by the Chinese ambassador, there is an unofficial agreement between the Maoists and India's intelligence agency RAW to end monarchy in Nepal,' the memoir says.
During his tenure, Wu, supported by Shah, lobbied vigorously for the establishment of a commercial bank, which would have been a joint venture between China and Nepal's army, with the Army Welfare Fund being used for capital.
Shah advised the king the bank could be used to pay pension to the Gorkha soldiers formerly employed in the Indian and British armies and the pension camps run in Nepal by both the armies could be shut down.
Shah showed a deep animosity towards the Indian Army pension camps - that besides disbursing pension also provide medical treatment and other welfare schemes to veteran soldiers and their families - saying they were a threat to Nepal's national security, like the Indian consulate in southern Nepal.
The commercial bank between the army and China was an incredible proposal that would have been undoubtedly rejected by India, if not Britain as well. Shah's lobbying did not yield any result finally though he managed to get the finance ministry approve of 20 percent foreign investment in such a venture.
Wu also reportedly told the palace official that Tibetans were causing trouble to Chinese police along the Tibet-Nepal border, escaping to Nepal and indulging in anti-China activities there.

The UN (refugee welfare agency) in Nepal is seeking to grant refugee status to such people,' the Chinese envoy reportedly said. 'It's not right and can harm Nepal-China ties. All such (Tibetan) people should be registered as criminals and deported to China.'
The Chinese ambassador is also reported as having met senior Nepal Police officials and suggested 'there should be good relations between Nepal Police, Chinese police and the Chinese embassy' and frequent exchange of information.
More than a decade after the reported meeting, whistleblower WikiLeaks published a document last month that said China was paying Nepal's police to arrest fleeing Tibetan refugees and hand them over to the Chinese.
The Chinese envoy also asked the palace to transfer the then home secretary of Nepal, Tika Dutt Niraula, and suggested that Nepal deploy its army to crack down on fleeing Tibetans and strengthen the army for that purpose.
According to Shah's memoir, China also sought to have Nepal's Army confer the same honour on the Chinese Army chief that it does on the Indian Army chief.
India and Nepal regard each other's army chiefs as honorary generals of their own armies, an honour that enhances the ties between the two neighbours and China.
However, the proposal has not yet been accepted by the government of Nepal.


(Sudeshna Sarkar can be contacted at sudeshna.s@ians.in)
Posted by Claude Arpi at 7:55 AM