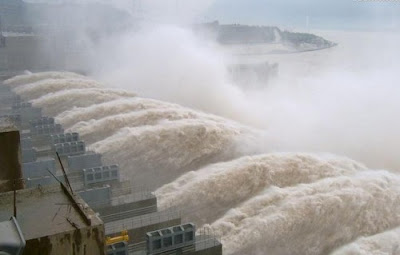 "Reversing a long halt caused by environmental concerns and the social upheaval of relocating people living in the shadow of dam sites" Beijing has decided to restart the construction of large dams on an unprecedented scale.
This is bad news.
Bad news for the Chinese people (millions will have to be resettled), bad news also for the neighbours (India, the Mekong countries, Burma, Kazakhstan, etc.).
The pretext is the global warning and the promises made in Copenhagen: "In 2009, ahead of the Copenhagen climate change summit, China pledged to cut carbon intensity — or the amount of carbon dioxide produced for each unit of gross domestic product — by between 40 percent and 45 percent by 2020, using 2005 levels as the base", says The Shanghai Daily.
The energy produced by hydropower plants being considered as 'clean' by the leadership in Beijing, building megadams becomes good for the environment of the planet by reducing the CO2 emission. Such is the theory.
On these lame premises, the construction will soon restart in the Middle Kingdom. Tibet will obviously the first affected.

China ready for flood of hydropower
Shanghai Daily
January 06, 2011
WITH 2020 clean-energy targets to meet, China is set to accelerate the building of hydroelectric dams, reversing a long halt caused by environmental concerns and the social upheaval of relocating people living in the shadow of dam sites.
The trend will create a "golden decade" for the nation's hydropower sector, analysts say, as high fuel prices continue to squeeze margins of coal-fired power plants that comprise the bulk of China's electricity-generating capacity. Renewable energy sources like solar power have been slow to come on line on a big scale because of high costs and grid-configuration problems.
The Chinese government now aims to have 430 gigawatts of hydropower capacity by 2020, increasing its earlier target of 380GW, the China Securities Journal -reported last month, citing unidentified sources.
"That means each year, the equivalent of one new Three Gorges Dam will be added in China over the next decade," said Shao Minghui, an analyst at China Post Securities, using the 2020 target of 380GW as a base. "The market is really sizable."
The 18.2GW Three Gorges Dam, which spans the Yangtze River and is located in Yichang, Hubei Province, is the world's largest.
A revision of targets in the 12th Five-Year Plan that starts this year calls for China to increase -construction of conventional -hydropower plants by about a third to 83GW and to raise the construction of pumped-storage hydro-capacity by 60 percent to 80GW, the China Securities Journal reported. The -revision is pending approval before the National Development and -Reform Commission.
In pumped-storage hydropower generation, water is pumped from a lower elevation reservoir to a higher elevation by using low-cost, off-peak electric power, and then is released to generate power during periods of peak demand or when electricity prices are higher.
China's hydropower generating capacity reached 200GW as of August - accounting for more than a fifth of the nation's total power-generation capacity. The last operating unit to be added was in Yunnan province in China's southwestern corner.
Shao estimated that the -conventional hydropower sector will need an investment of 900 billion yuan (US$136 billion) by 2020, of which 140 billion yuan will be spent on equipment. This may benefit -listed companies such as -hydroelectric works contractor China Gezhouba Group Co and equipment supplier Ningxia Qinglong Pipe Industry Co.
China had planned to install 70GW of new hydropower projects as part of its 11th Five-Year Plan, but construction was started on only about 20GW. Delays, especially of large-scale projects was mainly caused by the -massive amount of human relocation the -projects require and concerns about the environmental damage to surrounding landscapes.
The government's attitude, however, appeared to be changing since the second half of last year.
In July, China Huaneng Group and China Huadian Corp, two of China's main state-owned power groups, won clearance from the Ministry of Environmental Protection for major dams on the Jinsha River, the upper reach of the Yangtze River. In June 2009, the ministry had ordered a suspension in construction because of environmental violations.
The National Development and Reform Commission in late October granted approval for China Three Gorges Corp to proceed with the early-stage of studies on its two planned power stations - one of 8.7GW; the other, 14GW - downstream on the Jinsha River.
In an interview with Xinhua news agency in August, Zhang Guobao, head of the National Energy Administration, reaffirmed the strategic role of hydropower as the best option for clean energy.
Though China's hydropower capacity already ranks as the world's biggest, the utilization rate of its hydro resources still lags behind other countries.
Zhang Boting, a vice secretary general of the China Society for Hydropower Engineering, said droughts in early 2010 in southwestern China confirmed that more hydropower facilities are needed in the nation. Analysts also agreed that hydropower would be one of the cheapest and most achievable ways to help China meet its clean energy consumption target.
In 2009, ahead of the Copenhagen climate change summit, China pledged to cut carbon intensity - or the amount of carbon dioxide produced for each unit of gross domestic product - by between 40 percent and 45 percent by 2020, using 2005 levels as the base.
The government also aims to raise the proportion of non-fossil fuels in the nation's primary energy mix to 15 percent by 2020, from an estimated nine percent last year. Of the 15 percent, nine percent will come from hydropower and four percent from nuclear power, Zhang said.
Other renewable sources, like wind and solar, lack competitiveness in terms of scale, economics and technology compared with hydropower in China.
Zhang acknowledged that -hydro-power goals would be difficult to achieve, based on the approval status in the sector in recent years. He encouraged relevant agencies to -accelerate the approval process, while still adhering to strict -development rules.
The China Electricity Council, which represents the nation's power producers, also confirmed last month that the floodgates to build new hydropower projects are now open and the sector will enjoy priority status during the 12th Five-Year Plan. Projects will be mainly in mountainous south-western provinces such as Yunnan and Sichuan, according to Ouyang Changyu, vice secretary general of the council.
"To expedite approvals, China must address the problems of environmental protection and people relocation," said Zhou Yanchang, an analyst at Huatai United Securities. "And that will increase construction and operating costs."
One solution is to raise the price of hydropower electricity.
At present, the on-grid tariff - or the price charged by power producers to grids - for hydropower is below that of energy produced by coal-fired plants. The prices are set based on operational costs of -producing the power. -Hydropower projects require larger investments and involve longer construction times than coal-fired plants, but they run at lower costs upon completion.
In September 2009, Zhang, the energy chief, said China aims to equalize hydropower prices with those of coal-fired electricity in the long term, though many hurdles remain to achieving parity between the two energy providers.
Posted by Claude Arpi at 7:44 AM