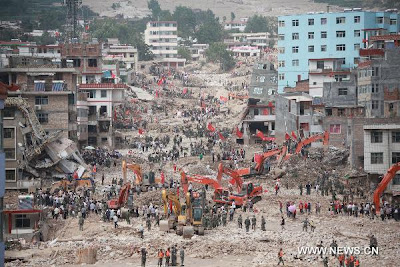 It is good when a Senior Researcher of the Chinese Academy of Sciences says: "The riches of economic development are not as valuable as green mountains and clear rivers".
He can't be accused to be a China baiter or a fanatic.
With the number of new projects sanctioned during the last few weeks, we are bound to see more and more human-made disasters in the future.
The problem is that there is too much money involved and the local apparatchiks have to fill up their pockets.
As Jiang Gaoming writes: "Zhouqu exploited its mountains, its water and its rivers and, in return, suffered a powerful mudslide", in other words, nearly-instant Karma.
When will humans learn from past mistakes?