Colonial Power at its best 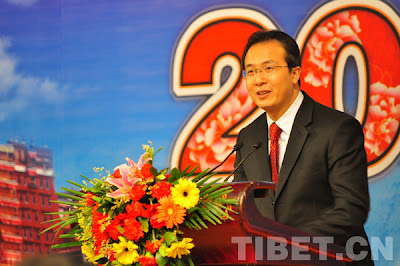 From another Article in China Tibet Online

With the Spring Festival around the corner, Tibetans working outside Tibet have begun their journey back home. Optional coaches in Lhasa have been launched to ease the travel rush, China Tibet Online reported.
The timetable for trains departing from Lhasa has been adjusted. The timetable of Train T28 from Lhasa to Beijing has also been adjusted.
Wang Jianqiu, who comes from southwest China's Sichuan Province, was very happy on her way home. Though she has to transfer another train after her arrival in Lanzhou to get home, sha was talking about her 17-year-old daughter all the time since she cannot wait seeing her.
"Every year during this time, we have to go home, since the Spring Festival is that for our family reunion though Lhasa is more warm and comfortable. We will be back to Lhasa in Match, where we have a Sichuan restaurant at Xianzu Island on the southern part of Lhasa," Wang said.
"The train T28 is 5 hours shorter than its regular duration. The train departed from Lhasa at 8:30 before the Spring Move (passenger transport around the Chinese lunar new year), so we had to get up very early to catch the train, but now it is more convenient for us to get ready for departure," said Lee, who was heading to Beijing on the train T28.
Posted by Claude Arpi at 7:04 AM