Struggle against the Dalai Lama: lasting, intense and fought vehemently. 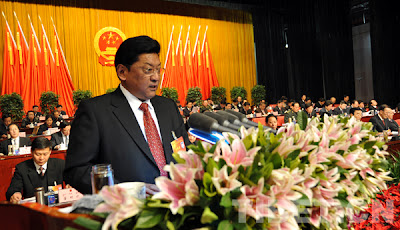 This speech of Padma Choling confirms what I wrote in a previous posting: the Tibetan cadres in Tibet lead by Padma Choling and Jampa Phuntsok are dead against the Dalai Lama's Middle Way approach.
It is one of the reasons why there is very little hope for a negotiated settlement between Dharamsala and Beijing in the near future.
But development alone will not solved the issue of Tibet.

Tibet gov't chief says fight against Dalai Lama lasting and vehement
2011-01-11
Xinhua
LHASA, Jan. 10 (Xinhua) -- Tibet's top government official on Monday said the fight against the Dalai Lama clique is meant to be lasting, intense, complicated, and sometimes fought vehemently.
"We are still facing an arduous task to fight secessionists and maintain stability in the region," Padma Choling, chairman of the Tibet Autonomous Region, said in his first government report submitted to the local legislature for review on Monday.
The secessionist forces led by the 14th Dalai Lama were blamed for provoking the deadly riots in Lhasa and other Tibetan regions in March 2008.
On another subject, Choling said the government's goal in achieving rapid development and long-term stability in Tibet also faces challenges from lagging infrastructure construction, development gap between urban and rural areas, and lack of a system to ensure long-term growth of residents' incomes.
Further, Choling noted that the region's economy grew by 12.2 percent in 2010. Additionally, incomes for both urban residents and nomads continued to grow and efforts to tame environmental hazards were strengthened while new roads and airports were built.
The central government has been pouring vast amount of funding, personnel, and resources to assist Tibet's development over the past decades. Much of these efforts can be seen in the complete makeover of Lhasa and other cities and towns in the region, along with their improved transport links - including the landmark Qinghai-Tibet Railway which began connecting the region by rail with the rest of the country in 2006.
Posted by Claude Arpi