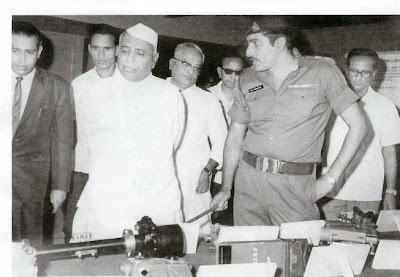 These extracts of a book by  R.D. Pradhan who served as Private Secretary to Defense Minister Y.B. Chavan in 1963, tend to prove that the CIC has not done his home work; he has probably not read the Henderson Brooks Report as stated in his order on the appeal of Kuldip Nayar. He may have only glanced through it.
Pradhan clearly states that the so-called sensitive information on the deployment of the Army in the NEFA were outdated (he published his book in 2007). One can add: it is hopefully the case, otherwise it would extremely serious.Can you imagine the same deployment in 2010 than in 1962!!
Pradhan gives the two reasons for keeping the Report secret. Interestingly they are not direct attacks on Nehru, though 'oblique'.
The first is a saying of the fist British Commander in Chief-in-Chief, Field Marshll Robert: "The art of war teach us not to rely on the likelihood of the enemy not coming, but on our own readiness to receive him; nor on the chance of not attacking but rather on the fact that we have made our position unassailable”.
The other one reads: "“the Higher Direction of War and the actual command set-up of the Army were obviously out of touch with reality”.
That is not much to keep the report secret for 47 years.
Once again, if they were sensitive informations, they could have easily been sanitized as it is normal practice in any declassification process.

Extracts of “1965 War: The Inside Story, Defense Minister YB Chavan’s Diary of the Indo-Pakistan War, published Atlantic Publishers, New Delhi, 2007) by R.D. Pradhan, Private Secretary of YB Chavan between 1962 and 1965.
"Thus for Chavan the main challenge in the first years was to establish relationship of trust between himself and the Prime Minister. He succeeded in doing so by his deft-handling of the Henderson-Brooks’ Report of Inquiry into the NEFA (North East Frontier Agency – present Arunachal Pradesh) reverses.
At the same time, le learnt some ‘lessons’ that helped him in the conduct of the 1965 Indo-Pak War. In this context, it would be relevant to refer to the Henderson-Brooks’ Report which remains an extremely closely guarded secret till this date.
During one of the debates, the prime minister has assured the Parliament that an inquiry will be held into the debacle. After much deliberations, Chavan proposed an inquiry by a committee of two serving army officers rather than a judicial probe or a public enquiry as expected by the Parliament. Further instead of the Defense Minister appointing a committee, he asked the Chief of the Army Staff [COAS] to set-up the same. Accordingly, a two-man committee with Lieutenant-General Henderson-Brooks and Brigadier P.S. Bhagat was formed. Both officers had impeccable record of service. Henderson-Brooks, an Australian national, had opted to serve the Indian Army after partition and Prem Bhagat was the first Indian officer to be conferred the Victoria Cross during World War II for bravery on the battle field. Their report was presented by the COAS to Chavan in July 2, 1963. The report contained a great deal of information of an operational nature, formations and deployment of the Indian Army.
In 1965, it was considered too sensitive to be made public and although outdated today, the report unfortunately remains secret. Author [R.D. Pradhan] is the only person alive who had examined the report for preparing the statement that Chavan presented to the Parliament.
During the conduct of the enquiry Chavan was apprehensive that the committee may cast aspersions on the role of the Prime Minister or the Defense Minister.
His main worry was to find ways to defend the government and at the same time to ensure that the morale of the armed forces was not further adversely affected. For that he repeatedly emphasized in the Parliament that that the enquiry was a fact-finding one and to ‘learn lessons’ for the future and it was not a ‘witch-hunt’ to identify and the punish the officers responsible for the debacle.
It was a tribute to his sagacity and political maturity that he performed his role to the full satisfaction of the Parliament and also earned the gratitude of the prime minister. Some lessons that he learnt are be found in the statement he presented to the Parliament (reproduced in annexure). But is also a fact that while going so, he also suppress certain critical observations. A few words about those might throw light on Chavan’s conduct at political level in the 1965 war.
Contrary to general expectations the report did not directly indict any political leaders. It was done obliquely. On the lack of proper political direction, the committee quoted British India’s first Commander in Chief Field Marsh Robert’s dictum: “The art of war teach us not to rely on the likelihood of the enemy not coming, but on our own readiness to receive him; nor on the chance of not attacking but rather on the fact that we have made our position unassailable”.
There was another observation: “the Higher Direction of War and the actual command set-up of the Army were obviously out of touch with reality”. In a way, this was an indirect indictment of the political leadership and the manner in which the operations in NEFA had been handled. Chavan found these observations a very harsh judgment on Pandit Nehru’s handling of India’s relations with the People’s Republic of China and for which many felt at that time that he was so much weeded to the Panchsheel that he refused to believe that China had some other intentions. By accepting that comment publicly, he did not want to cause any more anguish to the prime minister who was already shattered by the perfidy of the China’s leadership in subscribing to the Panchsheel but all the time preparing to attack India.
At the same time, he did not want to formally reject this observation because that might further aggravate the morale of the very same senior officers on whom he depended to get the army into shape to face any future aggression. He decided to suppress those observations.
So far as the Parliament was concerned he performed so ably that the end of the debate, the leader of the opposition profusely thanked him for his candid reply to the date. That way, politically, Chavan established his own identity. He also earned trust and confidence of the prime minister for the manner in which handled the most severe indictment that the prime minister had to face in his long parliamentarian career.
The report was a grant education for the novice defence minister. He made copious notes in red ink to help him understand that military jargon. Those ‘two observations’ would offer guidelines to Chavan to shape his own role as Defence Minister. He also earned kudos of his service chiefs for not carrying ‘witch-hunt’. His relations of mutual trust to each one of them was crucial to conduct the 1965 War as evidenced in his Diary."