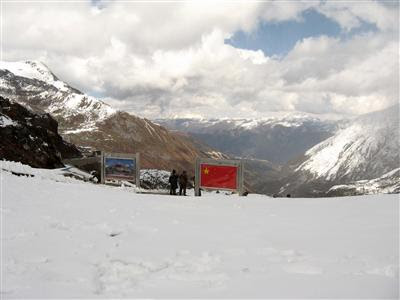 Can you believe it! For centuries, trade use to transit from India to Tibet and China through Nathu-la and Jelep-la. Gangtok and Kalimpong were then flourishing towns. Today 'Zero' import.
Mr Wen will have to look at this issue when he comes to India on December 15.

This reminds me of what Apa Pant, the Political Officer in Sikkim wrote after his first encounter with the Chinese Generals posted in Tibet in the early 1950's.
He said: "With the Chinese Generals, Chang Kuo-hua and Fan Ming, and also with Yung Kung-su of the Foreign Affairs Bureau, I had many conversations arising from my insistence on the religious and cultural character of India's concern with Tibet. I told them also that we were greatly interested in trade, and that we looked forward to the day when the road from Nathu-la to Yatung would be completed; to bring goods from Tibet and China to India and to carry our own products over the Himalayas to Tibet. But it was the common spiritual and philosophical heritage of India and Tibet that I took most trouble to expound and to link with the needs and achievements of our own time. I told them that what had been developed in ancient India and Tibet; and in China also, was a great science for. the understanding of the mind of Man and thus for the study of the faculty which today could invent nuclear: bombs and send Sputniks to the moon. Modern science; I said, looked at nature from outside lo reach conclusions about its .structure and behaviour. But there was also this great heritage of a much older science which studied from the inside the nature of knowledge itself, to reveal the human personality which creates and projects all that is outside, and to discover a way of transcending its limitations. I talked of Padma Sambhava, and his arrival in Tibet nearly twelve hundred years ago, to establish the first big monastery at Samye and to initiate the studies carried forward after him by hundreds of others. And I explained that in India today there was not only a sense of sharing with Tibet a long cultural tradition, but also a deep interest in seeing how this intimate science of the human personality could be linked up with the newer science of the outside world and with technological progress, for the coordinated development of a balanced life.
They heard me with attention, and I hoped that I had managed to convince them that India's claims to a special relationship with Tibet were genuinely harmless to China. I quoted the words spoken by our Prime Minister in Hong Kong and at Hiroshima about the need, to develop a new dimension of the mind for the adequate tackling of the problems that beset the modern world."


Zero imports through Nathu-la this year!
Correspondent
GANGTOK, Dec 5 – The fifth edition of Indo-China trade, through Nathu-la border closed for the season recording absolute zero imports this year. There were 135 Chinese traders at Sherathang Trade Mart near Nathu-La on December 1. From the Indian side, only 25 traders crossed the border to Tibet Autonomous Region of China (TAR).
The export business on December 1 was worth Rs 98,53,700, with import at zero. The trade that commenced on May 5 this year faced several teething troubles. This year’s business, despite picking up late, recorded yet another increase in the exports from this side of the border over the preceding years. As per the official record this year, the recorded export business was Rs 4,02,54,107.
District Collector (East) D Anandan, KK Kafley, Director of Commerce and Industries department and the Deputy Secretaries , Sumita Pradhan and Cheden Bhutia along with other officials visited the Mart.
China’s In-charge of Tibetan Autonomous Region (TAR), Ms Kesang Diki, while interacting with media persons, said that the reason for zero import was due to the non-feasible list of items. She expressed her dissatisfaction over the import list of items and requested the Indian Government to take the matter of revising list of items on priority basis, in order to have a good import value and to make the import list of items at par with the export items.
While interacting with the officials, she also expressed happiness over the goodwill gesture and expected revision of trading list by next year.
However, the traders in the Mart were seen selling unlisted items. When asked about it, the Custom SP, TW Sherpa said that it is very difficult for them to manage the border with only two staff.
DC Anandan, while talking to this correspondent said that this year over 300 trade passes were issued, while expressing his happiness on the export growth.
“Our main intention was to meet the Chinese traders at Rinquengang (Trade Mart in TAR) and to thank them for their support this season. We did not take much items,” said one of the traders.
Canned food, utensils, textiles, copper items, vegetable oil, tea, cigarette, coffee, misri, and blankets have been the most popular export items. The sixth edition of the border trade next year is expected to commence from May 1, 2011.
Posted by Claude Arpi at 4:16 PM