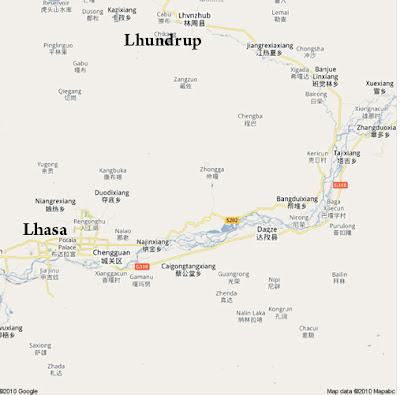 Last month, I had mentioned on this blog the new dam built by the Chinese near Lhasa.
More news on this front: it seems now that some 4000 farmers will have to be 'relocated'.
What is strange in this Radio Free Asia news item is that one thousand soldiers are camping near the construction site. Two thousand more are expected. Are they involved in building the dam? It would be a first for the PLA. Or could they have come to protect the Chinese workers?

Up to 4,000 Tibetan villagers may be forcibly relocated by Chinese authorities to make way for a hydroelectric project in an area north of Tibet’s regional capital Lhasa, according to Tibetan sources.
The project, to be completed in the Phodo area of Lhundrub county in the Tibet Autonomous Region, is set to displace about 500 households, a local Tibetan said, speaking on condition of anonymity.
“That means, as of now, somewhere between 3,000-4,000 people will be affected,” the man said.
“The Chinese are building bridges and blocking the flow of the river,” he said. “The Chinese have already built houses exclusively for the Chinese soldiers who have arrived to work on the dam.”
Some households have already been relocated, with others told they will have to move before the areas in which they live are submerged, the man said.
“They are being told they are not permitted to irrigate or plow their land or harvest any crops … By September next year, all must have moved.”
None of the affected families wants to move, the man said, adding, “They fear that they and their animals will suffer from diseases such as diarrhea and from maladjustment to unfamiliar surroundings.”
Despite repeated pleas, all have been “coerced” into leaving their homes, the man said.

Requests denied
Requests that all households be relocated to the same place have also been denied, with some groups now set to be moved to nearby Yulnga, Taglung, and Radreng, and others going to Lhasa.
Family groups sent to Lhasa will face particular hardship due to the largely urban area’s lack of grazing land for animals, the man said, adding, “They will be forced to sell their livestock and leave.”
“Each family is supposed to be given a sum of about 10,000 yuan ($ U.S. 1,500) in compensation, but they are being ordered to spend the money to build new houses into which they can move.”
Speaking separately, a source outside Tibet confirmed the report, saying he had heard that six towns and villages in the Phodo area are marked for resettlement.
Because three rivers near Phodo—the Radreng, the Lhachig, and the Pachoe—are scheduled to be dammed, he said, not just Phodo itself but also the surrounding county will be affected, he said.
“All the workers at the dam project are Chinese,” he added, citing contacts in the area.
“I heard earlier that there are already about a thousand Chinese soldiers in Phodo. On top of that, I now hear another group of two thousand soldiers has arrived.”
“Besides adversely affecting people and livestock, historic monuments such as a famous iron-link suspension bridge and a small nunnery will be submerged under water,” he said.
Chinese development projects in Tibet have led to frequent standoffs with Tibetans who accuse Chinese firms of disrupting the lives of local people and of polluting and damaging the environment.
Posted by Claude Arpi at 7:57 AM