Unhappy with China: now it is Kazhkhstan 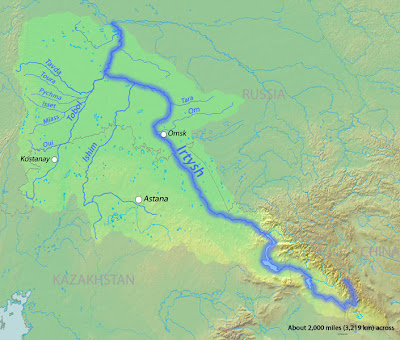 Last week I mentioned about the people of Burma being upset because the Chinese had constructed a dam on the upper Irrawaddy.
The report said: "A group of Burma activists say a dam in China has dropped the water level of an eastern tributary to Burma's Irrawaddy River to a historic low, making water flows erratic and damaging the economy in the area. China has been criticized before for not sharing enough information on its upstream dams."
Today, The Hindu reports a similar issue in Kazakhstan. The problem is that the leaders of the Middle Kingdom considers that all the rivers originating from their Empire belongs to them and the lower riparian States have nothing to say.
As long as this mindset will continue, China will have problems with her neighbours.


China's dams in Xinjiang region trigger concerns in Kazakhstan
The Hindu
Ananth Krishnan
December27, 2010
Dispute could hold crucial lessons for India in managing water-sharing issues with China over the Brahmaputra
BEIJING: China's dam-building spree in its far-west Xinjiang region has triggered concerns in the neighbouring Kazakhstan, where officials say two main rivers have begun to see water-levels recede at an alarming rate.
Officials from the Central Asian nation are expected to raise the issue with Beijing early next year and press for more information on hydro-projects in Xinjiang, officials in the Kazakh government told The Hindu.
The Irtysh and Ili rivers, crucial to Kazakhstan's water security, have their source in Xinjiang. Since 2000, China has accelerated development in the region, which has seen intermittent ethnic unrest.
Kazakh officials say China's development push in Xinjiang, which includes a number of dams and irrigation projects, is the main reason behind the falling water-levels in both the rivers. The rivers drain into the Balkhash lake, which sustains the livelihood of more than two million Kazakhs.
“The water flow from China is much less now than it was before,” Gabit Koishibayev, a senior counsellor at the Kazakh Embassy here who is involved in negotiations with the Chinese government, told The Hindu.
Negotiations have made little headway so far, say officials. The dispute, which stretches to over a decade, could hold crucial lessons for India in managing water-sharing issues with China over the Brahmaputra river. China's plans to build dams in the difficult terrain of Tibet are still at a nascent stage compared with its projects in Xinjiang.
Kazakhstan has, however, been reluctant to publicly voice its concerns. China is a major destination for Kazakhstan's energy exports. In both cases, China, as the upper-riparian or upstream-lying state, holds the cards, having not committed to any bilateral water-sharing treaties and being entitled to, under international laws, use the rivers' waters for hydropower generation and other projects. 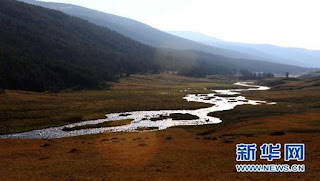 As with the Brahmaputra, there are also persisting concerns that China has plans to divert the Irtysh, though in both cases Chinese officials have stressed there are no such plans.
“We are very concerned about Chinese plans concerning the Irtysh,” said Mr. Koishibayev. “We also know that they are building channels and other infrastructure in Xinjiang.”
The Balkhash lake, he said, was “losing water.” “The water level is now lower by more than two metres to what it was three decades ago. Pollution is also rising, which has affected the banks and surrounding areas. Agriculture, the health of the ecosystem and the communities around it are at risk.”
Kazakh officials fear that the Balkhash will face a similar fate to the Aral Sea, which is on the verge of disappearing because of heavy pollution. Its mismanagement is regarded as one of the world's worst environmental disasters. Chinese officials stressed that China was “paying high attention to international communication on trans-border water issues”.
China was “carrying out related works according to principles of sustainable development,” the Foreign Ministry told The Hindu in a statement. “This is also in accordance with international laws and international principles.
At the same time, we are paying high attention to international communication on trans-border water issues.”
For China, managing water resources with its neighbours is emerging as an important diplomatic challenge, as it looks to balance the demands of its own spreading water shortages, especially in the arid north and north-west, with its foreign policy priority of maintaining a “harmonious” periphery.
China, which is increasingly reluctant to be seen as ignoring the concerns of its neighbours, has over the past year appeared to co-operate more in sharing information, Kazakh officials noted, both with Kazakhstan and southern neighbours who have voiced concerns about plans for the Mekong river.
In April, Chinese officials attended a meeting of the Mekong River Commission, which China has not formally joined, and promised to cooperate on flood prevention.
“We are providing information on floods and hydrological information related to the security of people's lives and wealth both upstream and downstream,” the Foreign Ministry told The Hindu.
China and Kazakhstan are now close to signing an agreement on quality protection, which will ensure that Xinjiang's industrial development will not continue to adversely reduce water quality in the two rivers, said Mr. Koishibayev.
Posted by Claude Arpi at 7:49 AM