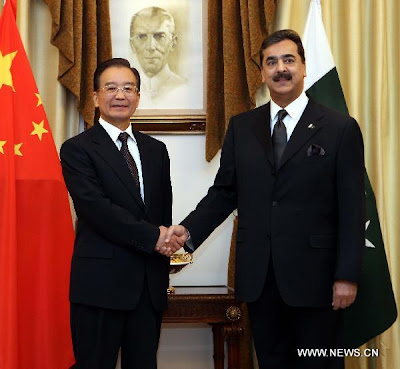 We knew that China was Pakistan's 'best' and 'most-trusted' friend, in other words an 'all-weather' partner, but now both nations are also brothers.
After his fiasco visit in Delhi, Wen Jiabao said in Islamabad that Pakistan is China's "good neighbors, good friends, good partners and good brothers".
What was the point to visit Delhi before Islamabad, Wen did not even want to speak about the stapled visas for Kashmiris or other contentious issues.
Worse, and hardly noticed by the Indian press, Beijing proudly announced the new road to Metok a day ahead of the visit (see my previous posting, A Giant Step towards the megadam).
Business could have continued to grow with or without official visit. The main problem for India is that the trade increases unilaterally. One can doubt that this has been tackled.
As for the Pakistan  visit, it means more infrastructure will be built in POK and elsewhere, more PLA's will come to Pakistan on 'humanitarian' missions, more nuclear facilities will be installed, and nothing will be done to stop terrorism to spread. When said that Beijing: "will continue backing Pakistan's efforts in defending national sovereignty, maintaining social stability and achieving independent and sustainable economic development."
Well, one day, terrorism may use the 'all-weather' Kakaroram Highway to spread its tentacles to Xinjiang.
Beijing should think about this and beware its brother.

China, Pakistani PMs hold talks to cement strategic cooperative partnership
Xinhua
English.news.cn
2010-12-17
Chinese Premier Wen Jiabao and his Pakistani counterpart Yousuf Raza Gilani reached extensive consensus here Friday on further strengthening their countries' strategic cooperative partnership.
"China and Pakistan were, are and will always be good neighbors, good friends, good partners and good brothers," Wen said during his talks with Gilani, citing the profound friendship between the two peoples and the solid foundation of bilateral ties.
In order to enhance communication and cooperation between the two "all-weather" strategic cooperative partners, Wen added, Beijing is ready to establish an annual conference mechanism between the two countries' leaders and a regular dialogue framework between their foreign ministers.
China appreciates the strong support Pakistan has long been offering on issues concerning China's core interests, and will continue backing Pakistan's efforts in defending national sovereignty, maintaining social stability and achieving independent and sustainable economic development, Wen said.
Noting that Pakistan has made huge sacrifice for and important contributions to the global counterterrorism campaign, the Chinese premier said his country is ready to work together with Pakistan to promote regional peace and stability.
Meanwhile, a great potential is yet to be tapped in the two countries' practical cooperation, Wen stressed, saying that concerted efforts are needed in this regard to bring more benefits to the two peoples.
In a three-point proposal, Wen prioritized the task to help Pakistan rebuild after its nationwide deadly flooding this summer, and pledged to offer assistance in road repair, food production and other relief programs if needed.
Additionally, the two sides should consolidate cooperation in infrastructure construction and expand collaboration in trade, investment and financial sectors, Wen added.
On the cultural sphere, he proposed to designate 2011 as the Year of China-Pakistan Friendship, co-sponsor activities to celebrate the 60th anniversary of the establishment of diplomatic relations, further broaden people-to-people exchanges, and thus promote mutual understanding and friendship between the two nations.
Gilani, for his part, said that China is Pakistan's "best" and "most-trusted" friend, and that his country sincerely thanks China for its valuable support and generous aid.
He expressed full agreement with Wen's proposal, saying that Pakistan is willing to join hands with China to beef up top-level contacts and strategic cooperation and pass on the two nations' friendship from generation to generation.
The Pakistani side, Gilani said, is confident that with concerted efforts, the Pakistan-China all-weather strategic cooperative partnership will surely reach higher levels.
Following their talks, the two leaders witnessed the signing of a number of documents on bilateral cooperation in economy, energy, finance, culture and other areas.
Wen arrived here from India earlier in the day for a three-day visit to the South Asian country, where he is also scheduled to address a joint session of the Pakistani parliament and inaugurate the China-Pakistan Friendship Center, a project built to facilitate exchanges among the two countries' students, media and academic circles.
Posted by Claude Arpi at 6:59 AM