The Gracious Wife and the Arlesienne 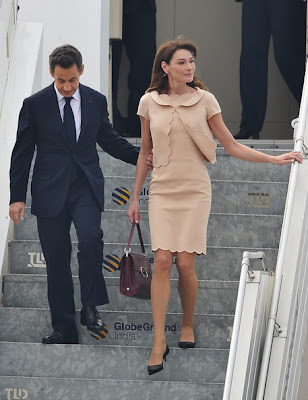 Have you heard of The Arlesienne?
In 1866, Alphonse Daudet, the famous French novelist wrote a story in which the main character, from the small town of Arles in Southern France (an Arlesienne is a girl from Arles), never appears on stage (a few years later, the great composer George Bizet wrote an opera on the subject). During the entire play, the spectators wait for The Arlesienne. Since then in colloquial French, an Arlesienne means someone whom everybody speaks about but no one ever sees.
One could apply this expression to the ‘refitting’ (or modernization) of some 52 Mirage 2000 for the Indian Air Force.
During the past couple of years, one has heard a number of times that the contract ‘will be signed next week or next month at the latest’. But a few months later, the same answer would be forthcoming: “it is imminent”!
Defence experts logically predicted that the contract would be signed during the ‘working’ visit (it was not a ‘State’ visit, but only classified as a ‘working’ one) of President Sarkozy in Delhi last week.
While seven agreements were inked on December 6, the ‘refitting’ of the Mirage was not included. The signed agreements were on film co-production, on development of peaceful uses of nuclear energy, on N-Science between the two Departments of Atomic Energy, on confidentiality of technical data, on cooperation in earth system science and climate change with ISRO; and of course the ‘general framework’ agreement on civil nuclear cooperation with France’s nuclear power giant Areva.
The main feature of the visit was obviously the decision of Delhi and Paris to build two European Pressurised Reactors (EPRs) of 1650 MW each for an estimated cost of about 9.5 billion dollars. However, it was only a ‘framework agreement’. Due to the complexity of the project between Areva and the Nuclear Power Corporation of India Limited (NPCIL), talks will probably take several months, if not a couple of years to reach a final conclusion. But it is on track, although when asked about the prices and the delay, both the Indian Prime Minister and the French President refused to answer. Further, the issue of civil liabilities will also have be thrashed out since the French side indicated before the visit that they were not satisfied with some clauses in the present Nuclear Liabilities Bill, recently (and painfully) voted by the Indian Parliament. Compromise will have to be found and hopefully will be found. The Jaitapur site in Maharashtra will ultimately have six reactors and produce 10,000 MW of power, a boon for ‘developing’ India.
The Joint Declaration rightly says that “the signing of the General Framework Agreement between NPCIL and Areva represents a significant milestone.”
What about the modernization of the Mirages?
The Declaration mentions: “Discussions concerning the upgrading of Mirage 2000 aircraft are expected to be finalised soon.”
According to knowledgeable sources, this time, it is done!
The French side, which was reluctant to accept arbitration in case of dispute, has finally agreed, while Delhi has accepted the price found ‘exorbitant’ by many in India.
The Times of India explained that the contract “has been stuck in hard-nosed negotiations for the last few years because the package offered by French companies Dassault Aviation (manufacturer), Thales (weapons systems integrator) and MBDA (missile supplier) was around 30% higher than what India was ready to pay initially.”
Nobody questions the fact that for the past two decades, the Mirages 2000 have done extremely well and one understands that the Indian Air Force was vouching for Dassault. The newly ‘refitted’ fighter planes should serve for some 15-20 years more.
After getting the final nod from the Cabinet Committee on Security, The Arlesienne may finally appear on stage; then four to six planes will be ‘modernized’ in France, while the rest of the work will be done by Hindustan Aeronautics under a transfer of technology. The entire project is estimated at Rs 15,000 crores (some 3 billion dollars).
This deal is symbolic of the visit. Though final contracts were not signed, substantive progresses were made on several pending files.
Before the visit, Herve Morin, then Minister of Defence told us: “President Nicolas Sarkozy’s upcoming visit in December will make our partnership progress even further in all its facets.” 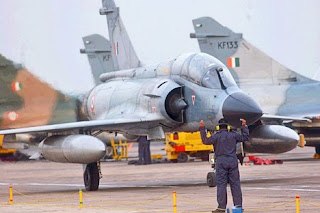 It is what has happened and even if the Indian and French press were quick to announce a total of 15 billions euros ($ 20 billions) of signed deals during the visit, $ 10 billions for Areva to supply the two first nuclear reactors plus 3 helicopters, a leasing of 14 Airbus planes, a Michelin factory in Chennai and ‘The Arlesienne’ Mirages, most are only ‘promised’ deals or ‘framework’ accords. These figures were however confirmed by the French President’s Office.
Other interesting project in the pipeline (which has not been listed in Delhi’s shopping list) is the co-production between France’s MBDA and DRDO of a short-range surface-to-air missile system called ‘Maitri'.
During his four days in India, President Sarkozy reiterated several times, France’s support to India for a permanent seat on the United Nations Security Council: “I believe that we need a reform in the Security Council… the world is not the same than in 1945. It is unacceptable that in two years India [today India is a non-permanent member] should be asked to leave”.
Whether in Bangalore, Delhi or Mumbai, the French President repeated that he was fully with India in its fight against terrorism originating from Pakistan: “France stands in total solidarity with India. If India is attacked, democracy is attacked. Terrorism and insurgency in Pakistan and Afghanistan are a major source of threat to world peace and stability. We cannot afford see Taliban succeed in Afghanistan."
Sarkozy appealed to India to support France’s Presidency of the G20, particularly the reforms of the monetary system. The Joint Declaration clearly stated: “France and India would like to work together to make the G20 as effective as possible and help it find its place within an international system that will better reflect today’s world and challenges.” 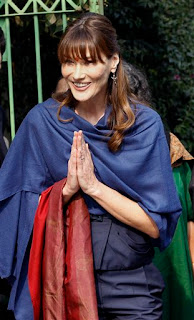 During a reception at the French Embassy, Sarkozy asked his countrymen to look at India as an example of a nation which has been able to ‘change and innovate’: “The world is changing with a stupefying speed. One century ago, France had her place in the world; France was one of the 4 or 5 great powers, it was their right to lead the world. They run the world. Today if our country wants to keep its place, we have to merit it, this can only be done by our work, our efforts and our capacity to innovate. France should sometimes get its inspiration from what is happening elsewhere.” He had earlier said that India should be a source of inspiration, “France needs not to change itself, but to remain itself, if it wants its message to be heard in the world. …We can’t tell others what should be done, we should do it ourselves.”
In many ways, the partnership between France and India has becomes more mature, and even if millions of Indians are emotionally moved when President Obama speak two words in Hindi or does a Namaste, Paris is in many ways closer to Delhi than Washington. The Joint Statement rightly reaffirmed the “shared vision and values inspired by multilateralism, justice, freedom, equality and fraternity, France and India reiterated their determination and confirmed their commitment to work together towards peace and global security.”
During the press conference at Hyderabad House, I saw only one smile on the solemn Indian Prime Minister’s face: it is when he welcomed ‘President Sarkozy and his gracious wife’. He may have been charmed but this cannot entirely explain the trusted relations between France and India.
Posted by Claude Arpi at 8:36 AM