The Story of a City 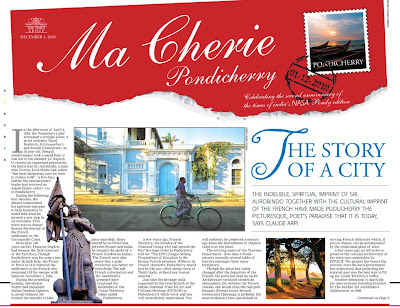 My article in today's Special Edition of The Times of India.


In the afternoon of April 4, 1910, the Pondicherry pier witnessed a strange scene: a strict orthodox Tamil Brahmin, Srinivasachari, and Suresh Chakravarti, an 18-year old Bengali revolutionary took a small boat to row out to the steamer Le Dupleix to receive an important ‘personality’. On board was Sri Aurobindo, a man who Viceroy Lord Minto had called ‘the most dangerous man we have to reckon with’. A few days earlier, the revolutionary leader had received an adesh (an ‘inner order’), ‘Go to Pondicherry’.
During the following four decades, the Master consecrated his spiritual energies to help humanity to undertake what he termed a new step in its evolution. This event was to change forever the destiny of the French settlement on the Coromandel Coast.
More than 150 years earlier, François Dupleix had become the first Governor of the Territory. Though Pondicherry was for some time under British Rule, the Treaty of Paris in 1814 restored the settlement to the French who remained till the Merger with India on November 1, 1954.
During the preceding months, Jawaharlal Nehru had requested Indian ‘freedom fighters’ to avoid violence. He wanted the transfer to take place smoothly; there should be no bitterness between France and India, he thought (he spoke of ‘French window on India’). The French were also aware that a quiet transition was better for everybody. The ‘soft’ French colonization and Sri Aurobindo’s presence have remained the hallmarks of the Union Territory, today called Puducherry.
A few years ago, Francis Wacziarg, the founder of the Nimrana Group who had opened the first Heritage Hotel in Puducherry told us: “The UPS (Unique Selling Proposition) of this place is the former French presence. Without its French character Puducherry would just be like any other sleepy town of Tamil Nadu, without any tourist interest”.
Just take the heritage walk organized by the local branch of INTACH in Puducherry’s ‘white town’ and you will immediately understand. You will suddenly be projected a century ago when the descendants of Duplex ruled over the place.
The enticing motto of the Tourism Department ‘Give time a break’, attracts annually several lakhs of tourists (amongst them many foreigners).
Though the place has vastly changed after the departure of the French, the town has kept its caché. Architecture certainly creates an atmosphere, but without the French cuisine, one would miss the real goût français (French taste). Several restaurants (Satsanga is probably the most authentic) have specialized in serving French delicacies which, if you so choose, can be accompanied by the traditional glass of wine.
A few years ago, an initiative to preserve the colonial architectural heritage of the town was undertaken by INTACH. The project has been a tremendous success; even the local government has understood that projecting the colonial past was the best way to fill up the Union Territory’ coffer.
Another attraction is Auroville, the international township founded by The Mother, Sri Aurobindo’s collaborator, in 1968.
Since then, pioneers started settling on a desert of red laterite, some 12 km north of Pondicherry town. The task was immense, but the most immediate need was down-to earth, to find shade from the scorching South Indian sun. Aurovilians started to rejuvenate the arid land; they planted trees, built bunds and dams to stop the soil being washed away with the monsoon rains and constructed the first primitive houses. It is how the first pioneers became ‘experts’ in environment. Today, Auroville is also known for the quality and creativity of its crafts.
Since a few years, the French leadership has realized the potentiality of a closer collaboration with India, not only in the economic field, but also in the cultural and scientific domains. President Sarkozy’s forthcoming visit to India should give a new impetus to the bilateral collaboration; one can only hope that Puducherry will find a special place in this new partnership.
Posted by Claude Arpi at 5:38 PM